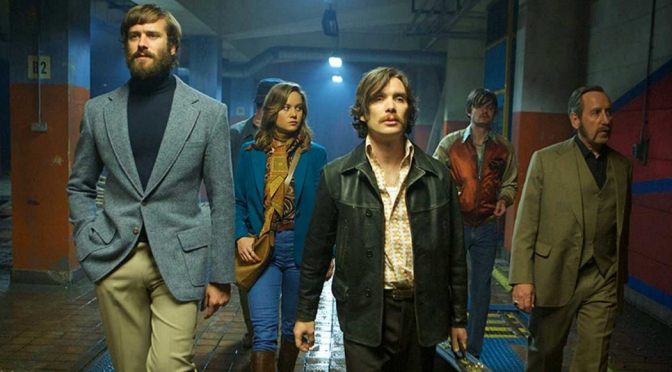 STORY:   An arms-deal-gone-wrong sets off a blistering gun fight in an abandoned Boston warehouse.

I admire the film director Ben Wheatley, and his writing/editing partner Amy Jump very much. They essentially are in the kind of industry position I would love to be in. They make independent low-medium budgeted films, seemingly on their own terms, get cracking actors involved and receive decent critical praise too.  Moreover, they have become FILM 4/BFI/London Film Festival darlings receiving funding and heavy promotion for the films High Rise (2015) and most recently, the incendiary comedy-thriller Free Fire (2016). The latter closed this year’s festival to a packed and thoroughly entertained Odeon Leicester Square and I was very fortunate to see Wheatley and his stellar cast introduce the film.

While I admire Wheatley’s career progression I have loved and not-quite loved his work. His first film Down Terrace (2009) was delightfully eccentric gangster film, while his next Kill List (2011), was a terrifying tale of two hit men’s descent into hell. Kill List fell apart for me with the grim yet overly surreal and symbolic ending, however, his work on comedy-serial-killer film Sightseers (2012) Dr Who, and Ideal confirmed him as a very talented filmmaker.  A Field In England (2013) could be praised as a brave filmic experiment which did not quite work as a story; while the stylized J.G. Ballard adaptation High Rise (2015) was an incredible film to look at, with Wheatley presenting some of his best work to date. However, the last 45 minutes was so chaotic it lost focus and while this was, arguably, in keeping with Ballard’s vision I would have preferred slightly more clarity.

I sensed from his brief introduction that Free Fire (2016) was Ben Wheatley’s attempt to return to something less socio-political, psycho-sexually and philosophically complex than High Rise (2015).  He basically said, “I wanted to make a film with guns where people get hurt.” And he has certainly succeeded there, because Free Fire is an all-out-ballsy-gritty-shoot-em-up which employs a wonderful 1970s Boston setting (actually shot in Brighton) to dress his actors up in flares, beards, sideburns, dagger-collars, long hair and Cuban heels, all while delivering a sweaty-fast-paced-high-octane-bloody-gun-fest.

The premise is very simple: an arms deal between a Rhodesian gun runner and the IRA descends into chaos as opposing sides split amidst a series of bullets and double-crosses.  Having established the characters into archetypes such as the professionals, soldiers, sidekicks, junkies and Brie Larson’s broker the narrative splinters spectacularly into magnificent mayhem.  The cast are all brilliant, but I personally loved Armie Hammer’s suave Jewish hit-man and Sharlto Copley’s obnoxious Afrikaner; plus Sam Riley is also a standout as the junkie prick whose behaviour ultimately screws the deal.

The whole thing plays out like a live-action cartoon but Wheatley and Jump do invest some empathy and likeability into the characters too. The subtext of world politics was not lost on me as Irish, Afro-American, South African, and American nationalities all face-off and later there’s a brilliant use of an old John Denver country classic. The script is terrific, full of violent delights and sparkling one-liners throughout as the cast spit out insults and zingers with glee. Do you remember when you play gunfights with your mates in the playground?  Well, this is the film equivalent of that – except with more blood and violence and death.