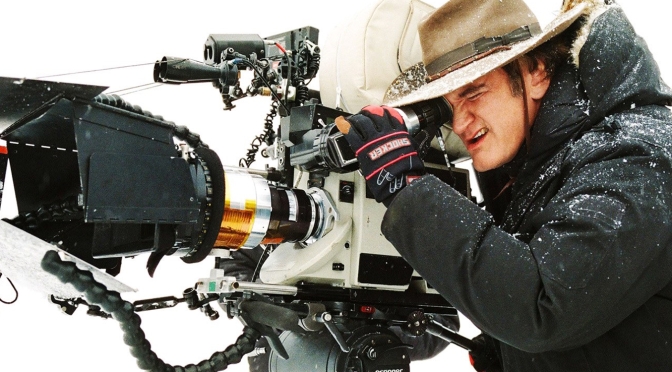 TELLING STORIES WITH STYLE: THE TROPES OF TARANTINO

Quentin Tarantino is a powerhouse of cinema. He has proved consistently, since his debut film Reservoir Dogs (1992) right up to his most recent film The Hateful Eight (2015), a filmmaker of incredible invention. His works are well known for their references to pop culture, TV shows, music, fashion, and quoting in general from an array of cinematic influences. Indeed, his films are always firmly planted in genre, from: war films to Martial Arts to Western to crime and B-movie pictures. However, despite utilising other genres as a springboard for his writing, Tarantino instils his own style within his work. This creates a paradoxical form of originality, making him what I would call a postmodern auteur. The postmodern auteur not only quotes, borrows and steals from other influences but they are able to present them in a fashion so as to make them feel fresh and somehow original.

It would be easy to write an essay of Tarantino-style bingo pointing out which films and genres he has used and stolen or quoted from, thus, as an alternative, I would like examine the narrative tropes he employs to tell his screen stories. Tarantino isn’t simply a cultural magpie throwing in arbitrary pop references but he has a magic box of narrative tricks gained from cinema, stage, literature and music. In this essay I would like to explore some of these methods and how he diverts from the linear narrative style represented by the classical Hollywood norm. I will also examine his work in general and scenes from his films to show how he has created some fascinating means of telling stories.

Tarantino differentiates his films from the classical narrative style in a legion of ways. Such tropes include: “Chapter Headings”; non-linear timelines; unreliable narrators; and what I have termed “the long game” scene or sequence. Along with his perpetual references to various genres, specific films and the use of soundtracks from other movies, such devices work brilliantly to propel the narratives of his films. It may seem quite a simplistic device to use, but “Chapter Headings” are a very effective story device.  It’s obvious to say Tarantino has borrowed from literature in order to structure his films this way, but the ‘Chapter’ introductions establish the nature of storytelling and literally inform the audience of a change in scene, time, place and character.

While classical Hollywood works to immerse us in the invisibility of filmmaking, Tarantino calls attention to the form with “Chapter Headings.” He does this not as a Brechtian distanciation device but rather as a means to include us in the story intellectually. The “Chapter Headings” also create humour, mystery and suspense. For example in Kill Bill: Volume 2, one chapter is called The Lonely Grave of Paula Schultz, which immediately conjures a mysterious and eerie story to come. It  turns out to be just that as Beatrice ends up buried alive as the segment further reveals more of her fascinating back-story. In an ingenious aside in Tarantino’s “Universe”, Paula Schultz is in fact the wife of King Schultz from his own Western Django Unchained (2012).

“Chapter Headings” also seek to cement and bind another of Tarantino’s tropes: the non-linear or fractured timeline structure. Here, fractured events are portrayed out of chronological order and do not follow the direct causality pattern of the events in the standard narrative model. Non-causality is as old as the hills with Homer’s The Iliad in the 8th century BC being one of the first examples of such a narrative device. Indeed, it’s easier to pick out a Tarantino film that doesn’t follow a non-linear structure than not. However, even his most linear film Jackie Brown (1997), which follows the eponymous protagonist’s attempts to stay out of jail and alive, finds the narrative splintering into a triptych of varying perspectives during the final act.

Often non-linearity is used to show dreams, flashbacks, time-travel and explore splintered identities or point-of-view; nonetheless, the non-linear narratives of, for example, Reservoir Dogs (1992), Pulp Fiction (1994), Kill Bill (2003/2004) and Inglorious Basterds (2009) contain fractured timelines from mainly a creative and aesthetic choice. But they are not just style for style’s sake as they create a dazzling intellectual response and activate the viewer to piece the stories together like a jigsaw. Reservoir Dogs (1992) is especially ingenious in breaking the rules of genre as it’s one of the only films I’ve seen about a robbery which shows us everything aside from the actual crime. It is important, however, to say that while Tarantino knows the rules of linearity he chooses to break them, on the whole, to enhance the cinematic experience. Interestingly, in my opinion, his most satisfying films are those which are his most linear. Tony Scott proved this when he re-wrote and re-ordered Tarantino’s script of True Romance (1989), while Django Unchained (2012), aside from a few brief illusory dream sequences and momentary flashbacks, builds powerful emotions as Django hunts down his slave captors and wreaks revenge in order to be reunited with his wife.

A narrative off-shoot of fractured timelines is Tarantino’s use of stories within stories and unreliable narrators. The device of the unreliable narrator is another means in which Tarantino differentiates his narratives from classic storytelling. In 1981, William Riggan, created a study of various unreliable types, including: The Picaro, The Madman, The Clown, The Naif and The Liar. The Picaro will typically be a bragger, similar to the Liar but not as heinous. The Madman or Mad Woman, however, will be more sinister but The Clown and The Naif will either be playing for laughs or in the latter’s case, telling their story from a naïve position. Tarantino takes great joy with narrators, unreliable or otherwise, telling lies; something seen brilliantly in both Reservoir Dogs (1992) and his most recent film The Hateful Eight (2015).

In Reservoir Dogs (1992), Tim Roth’s “Mr Orange” is revealed to be an undercover Police officer. “Orange’s” cop superior actively tells him to invent a story – because you “gotta have a story,” – to inveigle his way into the Joe Cabot’s gang. Thus, he invents a shaggy dog tale about the time he almost got bust by cops in a toilet. Tarantino presents a dishonest character delivering a story in a false reality providing both suspense and entertainment from a wholly unreliable basis. More ambiguous and vile is the story Samuel L. Jackson’s Major Marquis Warren tells to Bruce Dern’s irascible Confederate, General Sandy Smithers, in The Hateful Eight (2015).

Sworn enemies while occupying opposing sides during the American Civil War, Warren, raises the dramatic stakes by regaling the story of how he strips, sexually humiliates and then kills Smithers’ own son. We flash-back to this incident and must consider if this is actually real or invented in order for Warren to provoke Smithers to grab a gun; thus allowing the Major to shoot him self-defence. These devices are tremendously effective narrative tools for creating shifting emotional responses to characters and again mark Tarantino’s work outside the classical norm.

The Hateful Eight (2015), given it is virtually set in one location, is very theatrical in feel. Marrying the influences of the Western genre in such television shows as Bonanza with Agatha Christie’s novel And Then There Were None (1939), the film also evokes principles of the “Shaggy Dog” story and Chekhov’s gun theory where every element of a narrative has cause effect irreplaceability. Consequently, the whole film feels like one long sequence of scenes and event with a massive and particularly violent payoff at the end. Indeed, this narrative conceit is a major styling of Tarantino. While most basic screenwriting books will tell you to get in and out of a scene as quickly as possible to move the narrative along, Tarantino disregards this rule throughout his oeuvre. This, I call the “Long Game” scene where lengthy dialogue gives way to a spectacular punchline at the end.

A perfect example of the “Long Game” scene is the beginning of wartime epic, Inglourious Basterds (2009). We open with the “Chapter Heading”: Once Upon a Time in Nazi Occupied France and are introduced to Christophe Waltz’ SS Office Hans Landa. At first Landa is amiable and charming in his inquisition of a French farmer. Indeed the scene moves slowly and not without humour as the German takes out his over-sized pipe and drinks the farmer’s delicious milk. But, as this is Tarantino we know suspense is building to a slow but startling crescendo.

When the reveal of the hidden Jewish family below the timbers is shown, we realise that Landa is not the affable German he acts but a devious murderer and the nemesis within the narrative. With machine guns firing and splintering wood in slow motion, the soundtrack swells operatically as the scene ends with Shosanna (Melanie Laurent) sprinting away, her family butchered by the Nazis. Such “Long Game” scenes are one of Tarantino’s memorable tropes and he achieves this through his brilliant handling of conflict, dialogue and expert use of cinematic form and content.

Overall, Tarantino has had an exceptional film career by using established means of telling stories, both inside and outside the rules of standard narratives. He uses devices like those discussed to invigorate and entertain the audience. There is also much pleasure to be had from experiencing the tropes such as: “Chapter Headings”; unreliable narrators; non-linear structure and the “Long Game” scenes. Thus, using theatrical, literary, cinematic and musical narrative influences Tarantino proves himself a master of storytelling as demonstrated in his impressive body of work.