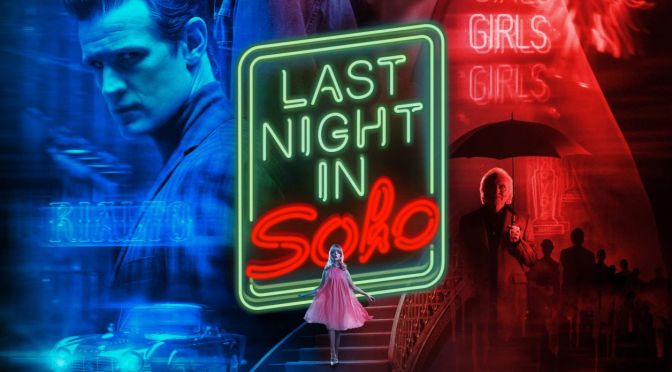 Edgar Wright is one of my favourite directors working today. His films possess an endless series of cinematic techniques such: long takes, quick cuts, swooping camera moves, canted frames, Steadicam, camera holds, frame switches, pans, scans, tilts, low-angles, metronomic editing, blurred dissolves, point-of-view and god’s-eye view shots. Moreover, Wright’s use of humour, music, colour, casting choices, and cross-genre collisions are spectacularly imaginative and entertaining. His latest film Last Night in Soho (2021) is no different. I was enthralled and excited throughout this ripping big-budget exploitation film, which juxtaposes influences such as Stephen King, Brian DePalma and Doctor Who, with a suggestion of Dario Argento and giallo cinema.

Last Night in Soho (2021) is both a love and hate letter to the Soho area of central London in the 1960’s and the now. If hate is too strong a word then at the very least the myriad of storylines collide to create a cautionary tale of one young person’s move from Cornwall to London to study fashion at the University of Arts. Major acting talent Thomasin Mackenzie is Ellie Turner, a passionate young woman who loves the sixties music and style, but also mourns the loss of her mother at an early age. Leaving her comfortable home she shares with her Grandmother (Rita Tushingham), Ellie experiences London and student life with initially mixed results. Finding it difficult to connect with her obnoxious room-mate, Jocasta, she moves into an antiquated bedsit, with imperious Diana Rigg as her landlady no less. All of a sudden her incredible journey into the glamorous and seedy past of Soho begins.

As with many of his films Wright establishes several storylines simultaneously. He brilliantly crosses rites-of-passage with period drama, romance, musical, detective and finally the horror genre. Ellie finds her feet at University, gets a job in a bar, receives praise for her initial designs and starts a budding romance with fellow student, John (Michael Ajao). At the same time her life becomes entwined in a surreal twist with that of Sandie (Anya Taylor-Joy), an engaging character desiring showbiz stardom who happens to live in Soho, but in the 1960’s. Ellie’s psychic link with Sandie brings her vivid dreams, but a striking empathic connection.

While Ellie is nervous and insecure within her London experiences, Sandie is the opposite. The theme of duality in their polar characters is both emotionally and visually breathtaking as their twin journey brings positive change and developing confidence in Ellie’s character. Yet, when Sandie’s career desires are exploited for nefarious gain by a local face called Jack (Matt Smith), both woman head for darker spaces in the shadows and smoke of the capital. Here the issue of mental health is intriguingly explored too. As Ellie is drawn further into Sandie’s nightmarish existence, she struggles to hold on to reality and the present.

Despite some minor wrinkles in the narrative and geographical London liberties taken, Edgar Wright has delivered one of the most thrilling and spectacularly energetic films of the year. The nostalgic and heavenly soundtrack is to die for, with so many songs I recall growing up listening to. Likewise, the cinematography and lighting design sparkle in hues of black, fluorescence, shadow and neon. Sure, Edgar Wright has his cake and eats it with mild virtue signalling relating to the “Me Too” movement. The male gaze eats up Anya Taylor Joy’s stunning charisma on screen, making us complicit in her downfall. Nonetheless, with issues relating to grief, mental health, sexual exploitation, identity, doppelgängers, urban breakdown and many more all enveloped into a craftily structured plot, you won’t find a more breathless cinematic experience all year. 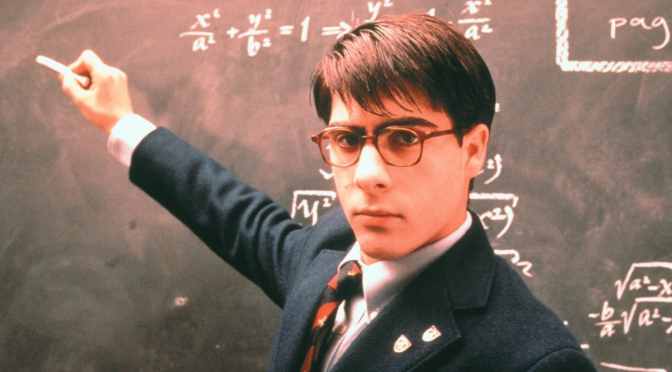 Having recently written positively about my favourite films of Wes Anderson I was spurred to revisit my favourite work of his, Rushmore (1998). It’s a smart, funny and poignant rites-of-passage narrative which spins off from the classic Hollywood teen films of John Hughes to deliver an esoterically beautiful set of empathetic characters. Like Hughes’ best work it is witty, warm and highly memorable.

At the heart of the story is Max Fischer (Jason Swartzman), a fifteen-year-old boy who attends Rushmore Academy. Like Ferris Bueller, he’s a maverick who drives his tutors up the wall with his rebellious behaviour. But Max is not all about looking cool, driving fast cars and singing to a crowded Chicago parade. He is far from the slacker that Ferris is, in fact he has started virtually all of the Rushmore clubs including: karate, fencing, French, and the ‘Max Fischer Players’. Their version of the film Serpico (1973), is absolutely hilarious. However, all such activities have impacted his grades causing Max to be placed on probation by the exasperated Principal, Nelson Guggenheim (Brian Cox).

Max is arrogant, confident, determined and forthright in his belief he is better than everyone, including the adults around him. But it’s a long-developed defence mechanism against one of the integral themes of Anderson’s film, grief. All the main characters including Max, Herman Blume (Bill Murray) and Rosemary Cross (Olivia Williams) are grieving the loss of a loved one. Amidst the quirky comedy Anderson therefore gives the film an air of mournful pathos, bringing us ever closer to the characters. With the theme of loss in play the Oedipal love triangle which plays out in the middle act is all the more humorous and sadder.

Max is a flawed character, but so driven that one cannot help but find him appealing. He hides his socio-economic situation, perhaps not ashamed of his working class background, but more a projection of where he wants to be. His Dad (Seymour Cassel) is a barber, not the surgeon Max tells everyone he is. Yet, there is love and respect between the two as they have clearly suffered loss together. As with Williams and Murray, Cassel gives a wonderful supporting performance.

Over the course of Rushmore (1998), amidst Max’s unrequited love for Rosemary, vengeful attacks on Herman, crazy schemes, school expulsion and hilarious plays, Max matures slowly, makes friends and finds his place in the world. Max also forges relationships with teenagers his own age and slowly releases his shield of grief. Jason Schwartzman is perfect as Max, delivering a winning combination of pathos, intellectualism and deft humour. Incredible to think it was his film debut beating, according to IMDB, 1800 auditionees to the role. 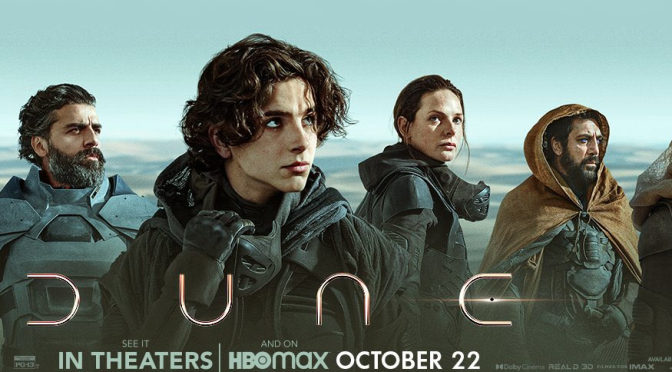 Based on: Dune by Frank Herbert

I truly hope Dune: Part One (2021), an epic adaptation of Frank Herbert’s legendary Dune literary series, has a second part, otherwise I would have wasted well over two hours of my life watching the Denis Villeneuve helmed film version. Having said that, there were times where I felt the glacial pace of the narrative caused time to stand still, boring me in the process. But, I get it. It’s part one and setting all the major players up and building a strange world both visually and imaginatively. As such perhaps Herbert’s books may have suited a HBO TV adaptation rather than a cinematic version.

Maybe I’m jaded and cynical though. Have I seen too many films and stories? Is Dune: Part One (2021) even worth the journey and perhaps it’s too old-fashioned a sci-fi story to create resonance for myself and these times? Well, it absolutely looks amazing. The special effects, sandy landscapes, behemoth buildings, underground monsters and space vessels are rendered with such believable authenticity they genuinely looked real on the screen. Frank Herbert’s (I haven’t read the books) vision is astoundingly realised as this futuristic world in a far, far galaxy felt like a moving work of art. But, it was extremely beige and brown and sandy looking on Arrakis, so much so that I was glad of the dark contrast in the scenes involving House of Harkonnen. By the way, I’m not often a fan of the natural cinematography style used here where during big action scenes at night I could hardly see anything. Moan over.

The story of Dune (2021) felt a bit old-fashioned as a classic hero’s journey. It didn’t help that the in-the-sand screenplay and Denis Villeneuve’s meditative, confident direction was too subtle for this story. I mean why do we care about Timothee Chalamet’s Paul Atreides and his family’s inheritance of the spice world’s of Arrakis? Without giving anything away it becomes a poisoned chalice politically in this world and Paul’s, his parents, and the House of Atreides’ lives all become endangered. So, while Frank Herbert’s novel was originally released to powerful acclaim in 1965 and five other novels would follow year’s later, a film version of Dune (2021) now feels outdated in terms of subtext. Villeneuve is a genius filmmaker, but I’m not sure, aside from the beautiful look of the locations, sets and actors there is much of a narrative to get our teeth into. Just another ‘white saviour’ quest, which is so drawn out in terms of the interminable slow pace at times.

Of course, the cast are wonderful to look at, but Chalamet is miscast for me. He is an incredibly talented young actor, but he is not given any character to get his teeth into. Villeneuve does a less-is-more style that I love and he’s obviously playing the long game with Dune (2021), yet he really needed a young Ryan Gosling to carry Paul Atreides as Chalamet isn’t given enough to do in terms of acting. Yes, there are massive worms and big explosions and floating fat men, but the story dragged. Thankfully, Jason Momoa injected some movie star charisma in his action sequences, while Rebecca Ferguson and Javier Bardem sprinkled some of their own spice amidst the over-controlled Villeneuve design.

I really wanted to like Dune (2021). I won’t see a more attractive and technically perfect rendition of a sci-fi world in the cinema in years. But, I could not connect with the narrative or drama. I mean, Paul is possibly the chosen one or something or other but why do we care? His mother is connected to some weird cultish sect — with the “Force” — and there are big worms which made me want to watch Tremors (1990); a far superior and shorter version of the hero’s journey. Watch that instead.