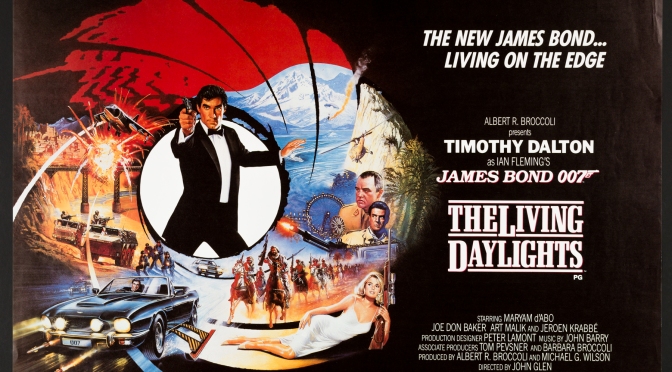 Based on: The Living Daylights by Ian Fleming

While it’s not a terrible film in terms of action, theme song and the villainous Christopher Walken, Roger Moore’s final outing as James Bond, A View To A Kill (1985), is on the whole a kitschy let-down. A geriatric Moore planks woodenly through the dramatic scenes and the joins between him and his wiggy stunt-doubles are plain to see. Even Roger Moore admitted, in an interview, he was “400 years too old to play Bond.”

While Moore is my least favourite Bond there were some highlights during his tenure, notably: Live and Let Die (1973) and The Spy Who Loved Me (1977), plus his battles with arch-henchmen Jaws (Richard Kiel) and some fine gadgets were always memorable. However, I found his performances too cheesy and his Bond lacked the charisma and steel of the inimitable Sean Connery. Eventually, his performances and films overall slipped into parody and Moore’s 007 was rightly retired.

After A View to a Kill, Pierce Brosnan was all set to take over. But due to a last-ditch contract renewal of TV show Remington Steele – which ironically benefited from the publicity of Brosnan’s Bond casting – the role was taken by an actor of some standing, namely Timothy Dalton. Moore’s blonde, safari-suited playboy would be replaced by a brooding, angry, dark-haired Welshmen who had trod the boards at the Royal Shakespeare Company and played iconic roles such as Heathcliff and Mr Rochester in film and television.

Dalton’s debut Bond was The Living Daylights (1987) and having watched most of the Bond films a few years ago – when they were replayed on Sky in 2012 – this one stood out as a right cracking espionage thriller. It was annoying because in the past I had wrongly dismissed it due to Dalton’s short career as Bond. But the Prince Charles Cinema in London began a 007 retrospective this year, screening the entire Bond series, thus I decided to experience it on the big screen for the first time.

After years of fun but hollow and almost satirical spy performances from Moore, Dalton gave a darker more nuanced tone in The Living Daylights. The film opens with a thrilling skydive and chase involving a training exercise gone wrong and culminates in Bond battling an unknown assassin on top of an exploding truck. As Bond parachutes to safety atop a passing yacht you soon realise we’re in safe hands with Dalton as he’s tough, athletic and very realistic. In fact, from research I gather he did many of his own, less dangerous, stunts in order to assure authenticity.

The plot of The Living Daylights is one of its major strengths. There’s no one single pussy-stroking-scarred-megalomaniac threatening to take over the world but more of a corporation of villains, from Joe Don Baker’s over-the-top-military-nut-with-a-Napoleon-complex, Whitaker, to Jeroen Krabbe’s Georgi Koskov; a devious Russian triple-agent attempting to reignite Cold War tensions between the KGB and British Secret Service.  There’s also a formidable henchman called Necros played with physical prowess and Aryan superiority by Andreas Wisniewski.

Bond enters the fray when he is sent to take down a sniper sent to kill Koskov. In a plot twist, very much faithful to the energy of Ian Fleming’s original short story, he spares the baited “assassin”, a cellist named Kara Milovy portrayed with naive charm by Maryam d’Abo.  During the “assassination” attempt on Koskov, Bond senses something is wrong and spares Kara’s life. This sets in motion some wonderful cat-and-mouse espionage set-pieces and chases through the streets of Vienna and on the ski-slopes of Austria.

Indeed, the relationship between Kara and Bond, while starting from a deadly position, provides a key romance and subplot but never feels forced. I especially enjoyed the integration into the story of Kara’s cello which is used throughout as a means to bring the two together; notably during the early “sniper” scene; plus when they trick KGB agents in Vienna; and when it’s employed as a makeshift snowboard while escaping capture.

The “cello ski-slope” stunt is just one of the brilliant action sequences in the film. Other great action scenes are the gadget-heavy car chase featuring the Aston Martin which precedes it plus a heart-stopping stunt at the end involving the huge cargo plane. Bearing in mind this is before any kind of computer-generated imagery was used in cinema, the feat of the stuntmen hanging out of the plane on a net while fighting just took my breath away when witnessed on the big screen. Within the action there’s a lovely pay-off too as Bond eventually uses the ticking time-bomb he set to blow up an Afghan bridge to defeat the Soviets.

Of course, while Bond is ultimately a cartoon-action-spy-thriller there are some interesting socio-political points made. Whitaker, Koskin and Necros’ nefarious plans involve using Soviet funds to pay for a huge opium purchase from the Mujahedeen in Afghanistan and in turn use the profit to buy more weapons and further the Cold War conflict.  The film suggests certain Governments, Military and Secret Services often manufacture wars and assassinations for their own political and economic needs and Bond himself is the “Lone Ranger” policing the world against these crazed, avaricious warmongers. While I really like the Daniel Craig Bond era, on the main, his films do lack a certain political depth in regard to current topical events; desiring to avoid accusations of political incorrectness no doubt.

Compared to the Moore films it could be argued there’s a lack of humour in the Living Daylights. I think this is incorrect though as there’s some nifty laughs and fine one-liners throughout; it’s just Dalton plays it dark and deadpan. Yet there is also playful invention in the film, for example, I loved the way Koskin defects by being shot down a huge pipeline. Furthermore, Necros has a cheeky line in unlikely disguises and accents, while Dalton himself has some cracking puns, especially when Necros is literally given “the boot” during the final aerial punch-up.

Right at the end during Cara’s cello recital we get the most risqué joke of the film as the Mujahedeen turn up adorned in full “terrorist” garb saying they “got held up at the airport.” In today’s po-faced, politically correct climate we probably wouldn’t get satire like that because it is arguably xenophobic and proffering certain derogatory Middle Eastern stereotypes. However, it gained a massive laugh while I was watching.

The Living Daylights, for me, is a very fine Bond film and Dalton is an incredibly under-rated 007. He only did two films but brought a pathos, depth and unpredictability to the role that Moore severely lacked. Bond is a stone-cold-killer-burnt-out-anti-authoritarian-adrenaline-junkie who has seen death a thousand times over; and Dalton plays him as such. Connery, Craig and at times Brosnan got this over in their performances but none as much as Dalton. The film works brilliantly on the big screen too and stands the test of time as both a sterling Bond film and cracking espionage action thriller.