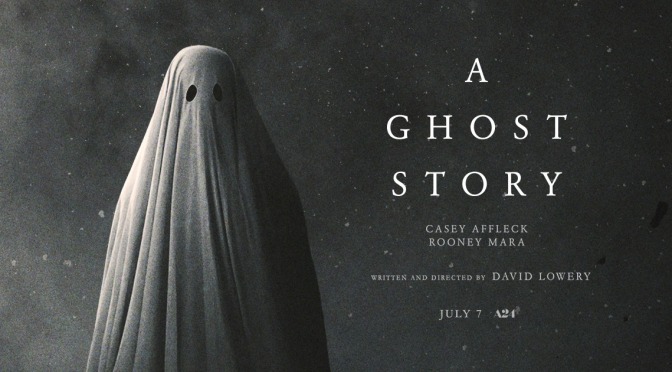 (Contains mild spoilers – nothing you may not already know.)

I write reviews for a number of reasons. Firstly, I love cinema and TV and music and culture in general and enjoy writing and thinking about the things I have seen and why I liked or disliked them. Secondly, as a writer myself I enjoy considering aspects from a screenwriting perspective and analyses what did or didn’t work for me. Thirdly, I guess from a narcissistic or egotistical perspective there’s a part of you that wants the attention or simply just confirmation that one’s opinions are being read or listened too. Ultimately, it’s a pastime and a bit of fun.

Every now and then a film comes along which is hard to place and it makes you think and you actually have to apply yourself. You can fall into certain traps of structure or at worst formula when writing reviews. But with David Lowery’s majestic A Ghost Story (2017) he has delivered such an original work of cinema art it is difficult to follow one’s established reviewing rules.

For starters it is difficult to even give you a brief synopsis of the film because it is so simple in its concept that the title itself sums up what the narrative is. It literally is a Ghost’s story!  However, after establishing the accessible drama of the loss of a loved one, the characters move into a whole new level of complexity in regard to the supernatural, temporal, philosophical and metaphysical.

The main cast are Casey Affleck and Rooney Mara and they brilliantly under-play a loving couple who share a property in a nameless place. Their characters are also seemingly nameless (referred to as ‘C’ and ‘M’ in the credits) and their normal lives are then torn apart when he dies in a car accident. In a beautifully haunting scene at the morgue ‘C’ “awakes” as a GHOST IN A SHEET! Yes, his Ghost is shrouded in a sheet with two eye-holes cut out. My feeling about this initially was how would the director make it work without possible derision? But, due to his sheer confidence in the idea and choice of shots, music and pace we are quickly enveloped by ‘C’s pale figure and his drama.

From then on we see everything from the Ghost’s perspective and it truly is heart-breaking. I mean it takes guts for the filmmaker to cover his leading actor for the rest of the film but it genuinely pays off. My feeling about the sheet idea was that in death we lose our identity via our body, yet our soul lives on in the space where we existed. Our Ghost here is a genuine lost soul unable to move on and he literally haunts his home in a desire to stay with the one he loves. I also enjoyed the spirituality of the piece without once there being a reference to religion. It’s not about dogmatic belief systems but the purity of life and love.

David Lowery has created one of the most original stories of the year and his handling of composition; editing and temporal structure is a masterclass in pure cinema. This film is hypnotic, tragic and one of the best of the year. It echoes the work of Bergman, Kubrik and Tarkovsky. I for one do like my conventional genre films with well-formed characters and clear plot-lines, but this film transcends cinema conventions and delivers one of the most poignant and melancholic experiences of the year. Plus, the score by Daniel Hart really augments the minimalist approach and often dialogue-free sequences. Overall, this is a meditative joy which is both unconventional yet in its unpolluted filmic poetry had me transfixed throughout.