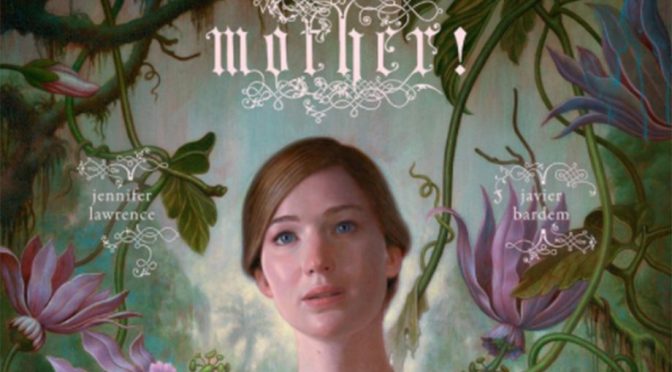 Darren Aronofsky’s psychological horror stars Jennifer Lawrence and Javier Bardem as a couple in not so much a narrative but a descent into what-the-fuck?  They portray conduits of hellish pursuit dictated by a filmmaker on the edge of a nervous breakdown, vengefully striking out at his ego, superego and the world around him.  I mean, you know when someone tells you their dreams in nightmarish details and it’s more interesting to them than you: well, this is two hours of that.

While this is technically a bravura tour-de-force in design, composition, cinematic experimentation and delivery I was utterly bored by, what is essentially, an indulgent, pretentious and nihilistic void of a film.  Darren Aronofsky’s prior work such as Requiem for a Dream (2000), Pi (1998), The Wrestler (2008) and Black Swan (2010) combined cinematic style and protagonist emotion superbly. Mother, in its critiques of Hollywood, fame and some kind of biblical allegory stuff wildly missed the mark for me. I wasn’t even shocked by the horrific denouement as it all happened in a surreal vacuum where I could not care less about any person or anything.

Christopher Nolan used cinematic form to powerful effect in Dunkirk (2017) and moved me immensely but Mother just bludgeoned me into dull submission. I wonder if Aronofsky’s experience on Noah (2014) had somehow warped his mind and the film is a creative and therapeutic cry for help, while at the same time damning the executives who possibly killed his film baby. He certainly throws a lot of toys from his pram in this violent, bloody, fiery, misogynistic and misanthropic misfire!

Lawrence was incredible as the battered lead while Bardem just felt confused and off-the-pace-at-times to me. While it is the work of a filmmaker I would certainly call an artist and generally I love the surrealist films of Luis Bunuel and David Lynch, the nightmarish logic narrative did not work for me as the cyclical parlour trick in closing the story is mere sleight-of-hand to fool the audience into thinking the film is deeper than it is.

Ultimately, Darren Aronofsky, based on his prior films, is a risk-taking, boundary-pushing genius and some will adore this brave and courageous misadventure. However, for me it was an awful, pretentious heap of a film which exists as an entertainment void both nihilistic and dull. I mean I’m just a lowly office drone but I paid my money and earned my opinion. Because this film abuses the privilege and patience of the audience delivering a technically brilliant but overall clichéd, first-world-problems-poet-with-writer’s-block-world-murdering-art-fan-hating two hours I will never get back.