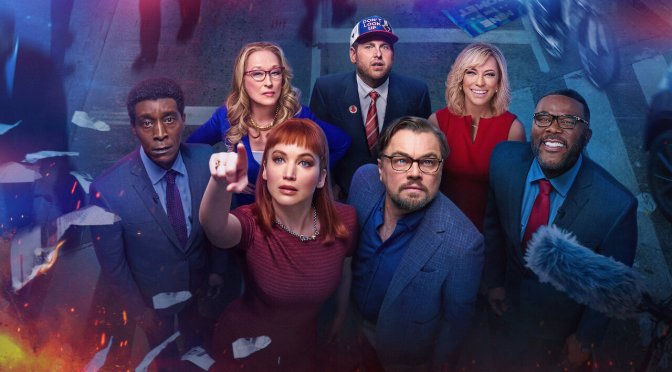 Adam McKay has had an interesting filmmaking career. He was a head writer on Saturday Night Live for two seasons before moving into cinema comedy by writing and directing gag-heavy comedies such as Anchorman: The Legend of Ron Burgundy (2004) plus the sequel, Talladega Nights: The Ballad of Ricky Bobby (2006), Step Brothers (2008), and The Other Guys (2010). While one could see these films as silly and knockabout Will Ferrell clown vehicles, certain films contained explorations of social issues relating to sexism in the workplace and big corporation fraud. Nevertheless, it was still surprising when McKay shifted toward more dramatic work full of barbed satire and social commentary. While both The Big Short (2015) and Vice (2018) certainly had humour, they also impressively dissected the mortgage crash and the political rise of Dick Cheney, respectively.

His latest film is the Netflix produced Don’t Look Up (2021). It is a disaster movie in genre, that also mixes in comedy, political satire and drama. The story concerns Kate Dibiasky (Jennifer Lawrence), an astronomy Ph.D. candidate, discovers a previously unknown comet. Kate’s professor Dr. Randall Mindy (Leonardo DiCaprio) work together and find that it is an extinction event which will destroy all life on Earth. Only having presented their findings to NASA and the White House do they find themselves dealing with indifference, administrative incompetence and corporate neglect lead by insane financial greed. As news of the impending doom hits society, the population become split between believers and naysayers leading to division and chaos.

Don’t Look Up (2021) is arguably less serious in tone compared to Adam McKay’s previous two films, but the message is ultimately more damning of the U.S. Presidency and humanity as a whole. Because the gigantic comet heading for Earth is very much a metaphor for climate change. Here Meryl Streep’s President is dizzyingly dismissive of the science and only begins to act when it is politically and financially beneficial. Her Chief of Staff son, a brilliant Jonah Hill, is a sycophantic numbskull more interested in Lawrence’s raging scientist, rather than saving the world. Indeed, Dibiasky and Mindy get side-tracked by glamour, celebrity and the toxicity of social media. DiCaprio’s arc is amusing as he goes from nervous mouse to confident commentator in the middle act, only to experience a costly personal comeuppance.

Rich in fast-paced gags at the expense of pop, media, political, corporate and dumb human personalities, Don’t Look Up (2021), is a highly entertaining disaster movie with a terrific ensemble cast. I felt Leonardo DiCaprio, one of my favourite actors, was a tad miscast as the science everyman, but he still gives a great performance. Lawrence provides the most grounded and empathetic character playing it straight amidst the all-round insanity. The White House “vending” machine running gag is the best in a film full of funny lines. Mark Rylance is craftily good as the social media megalomaniac manipulating the catastrophic narrative to his own means, but as aforementioned Jonah Hill steals the comedy show. Lastly, Adam McKay probably over-reaches with the poignant family-driven ending. However, I did feel a true sense of loss for the characters and our planet as a whole. The Earth may be full of idiots who don’t want to look up, but thankfully there are storytellers trying to turn their minds in an amusing, silly and intelligent fashion.