Based on: The House of Gucci: A Sensational Story of Murder, Madness, Glamour, and Greed by Sara Gay Forden

I’m not a fan of fashion. I wear clothes obviously and like to be smart and clean. Yet, the idea of believing one’s garments, shoes and accessories mean you are important, superior or worthy of adulation sickens me to be honest. However, fashion is a multi-billionaire industry and I get that people of variant social standing love it as a cultural phenomena. People either own or aspire to own over-valued garments and objects to inflate their ego or sense of importance is beyond me. Then again, I passionately enjoy watching human beings kick a ball into a net, so everyone has irrational passions. C’est la vie!

I didn’t go to see House of Gucci (2021) to look at the clothes though. My interest in this star-studded, big budget crime drama directed by the legend, Ridley Scott, was more because I did not know anything about the lives and personalities within the Gucci empire. Who would have thought that a wealthy family unit could have turned out so poisoned by greed and envy?

Covering a period of twenty or so years from the late 1970s into the 1990s, the story is structured around the relationship between Patrizia Reggiani (Lady Gaga) and Maurizio Gucci (Adam Driver). They fall passionately is lust, much to the chagrin of his spiteful father (Jeremy Irons) and marry against his will. Patrizia genuinely loves the sensitive Maurizio, but also has green eyes for the Gucci empire and the power that can bring. As her desire for influence in the family business grows, then so does cracks in their marriage. Crumbling relationships, business chicanery and family treachery dominate the narrative, all coming to a head with tragic results.

As a morality tale about how greed corrupts and drives human beings toward unnecessary tragedy, The House of Gucci (2021) is certainly worth a watch. Is there a sense the Gucci family were cursed by there wealth. Perhaps? But the film and screenplay as a whole present this theme without really drawing them out to full dramatic effect. However, the cast are absolutely fantastic throughout with Al Pacino, Adam Driver, and Lady Gaga on particularly exceptional form. Jared Leto dominates many scenes with his bald head, extra weight and screechy voice. While entertaining, the director could have reigned Leto in slightly to extract more pathos from the sad clown that is represented in Paulo Gucci.

I had a few issues with The House of Gucci (2021) inasmuch as it felt incomplete. At times it was as though I was watching a test screening version. The transitions between years were often confusing. What year is it, Ridley? Adam Driver’s arc from likeable young academic to selfish adulterer was rushed and unearned. I got the evocation of a Fredo and Michael Corleone dynamic between Maurizio and Paulo, but this really could have been developed further. The cinematography was grey and dull with the natural lighting style working against the expected colour and vibrancy of the 1980s era. I also wondered if the film had been graded?

While watching The House of Gucci (2021) I just kept thinking of more superior crime and gangster films. It is also mildly disrespectful to a genius like Ridley Scott to say Martin Scorsese would have knocked this story out of the park. I truly felt, while Lady Gaga was excellent in her role, her character could have been written and given a voice-over up there with that of Henry Hill’s. Nonetheless, I still enjoyed the film but wonder if there is a director’s cut out there which doesn’t feel rush released. Or even the possibility HBO or Showtime may adapt it into a longer drama series in time. Yet, does one want to spend more time with such avaricious and vain characters? Depends who is telling the story I guess. 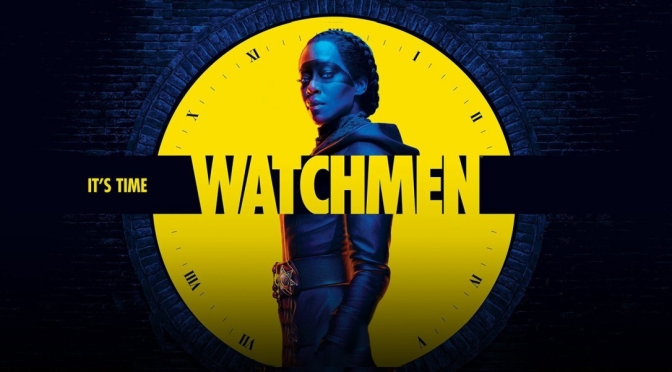 Based on: Watchmen by Alan Moore and Dave Gibbons

Maybe I am imagining it, but I think we are now entering a different kind of TV narrative storytelling. Perhaps it has always been there? However, I am sure I can now see through the ‘Matrix’ of the internet’s all-powerful influence. My point is that we are moving away from traditional television storytelling which is solely interested in telling an emotionally whole and linear narrative. Is television that has a predictable soul and a beginning, middle and end — in THAT order — disappearing? Or am I just choosing to ignore the saturation of standard dramas involving cops, criminals and medics to watch more complex TV stuff?

Recent television shows such as Legion (2017), Westworld (2016), Dark (2017) and now Watchmen (2019) take stylish, cinematic and transgressive structural and thematic approaches to narrative. One could accuse them of being postmodern fakery or postmodern genius; or both. There does appear to be a movement toward over-complicated-clickbait-viral-trailer-led-ADHD-TV which fragments and shatters its’ story lines. The creators want us to experience their productions not in the traditional beginning, middle and end standard, but rather through shifting timelines, unreliable narrators and a blurred sense of what is right and wrong.

Damon Lindelhof, who is a brilliant writer and very experienced TV creative, does tend toward the pretentious and over-complex in his work. Having said that his recent production The Leftovers (2014 – 2017) contained some absolutely sensational thematic explorations of the apocalypse, damaged humanity and religious fervour. For his latest project HBO has given him a truckload of money to emulate and remix Alan Moore and Dave Gibbon’s seminal 1980’s comic book Watchmen. The original itself was a subversive tome of genius which subverted the mythology of comic book and superhero storytelling.

The main action is set in 2019 Tulsa, but also spans decades of alternative U.S. history and locations on Earth and not on Earth. If you don’t know the original source material or have not seen Zach Snyder’s valiant adaptation Watchmen (2009), you will be very confused initially and throughout. Because Lindelhof’s approach to this alt-world version of masked cops, criminals and vigilantes is via a chopping meta-storytelling structure. The various plots events and character histories are delivered via flashbacks, flash-forwards, narcotic visions, hallucinogenic dreams, splintered timelines and even a TV show within this television show. It’s a very stylish smorgasbord, splashed with crazy characters, witty hard-boiled dialogue, wild science fiction twists, lashings of violence, pockets of substance, cinematic visuals, high class production values and a cast to die for.

Yes, but Paul, what’s it actually about? How about love, hate, racism, superheroes, corruption, giant squids, cloning, rogue scientists, good versus evil, vigilantism, revenge, megalomania, transcendent beings, war, violence, rogue politicians, superheroes, masked identities, nuclear threat; and that the United States continues to be sown with the seeds of intolerance, blood and death. Watch the Watchmen (2019), take your time and piece the crazy jigsaw together for yourself. If not, and you prefer to play it safe, there’s always Law and Order for those who want something less mind-blowing.