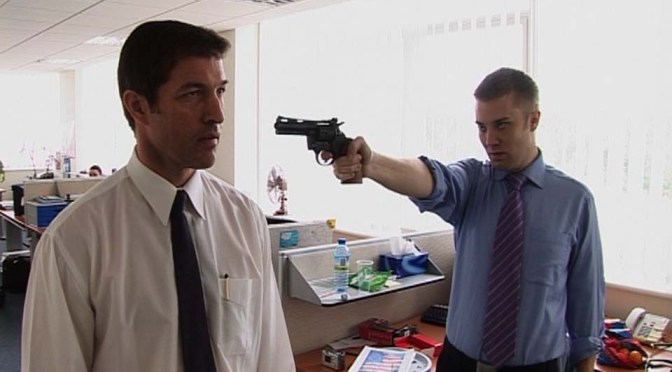 Incredibly it’s been TEN years since myself and my creative ally Gary O’Brien began working on short films together!  And despite no actual financial success, some short film festival screenings and vague industry interest in our work (I made that last bit up) we are STILL going!  Now we are planning our TENTH short film this year! Why I hear you ask:  because we love films AND the creative process and that is success enough for us.  I think.  That or we are a little bit mental! Or delusional.  Both probably!

Anyway, to celebrate  a DECADE of short filmmaking I’m taking a trip down memory lane to examine the films we have made and maybe just maybe add a few more views to their YouTube status.  Or gain a new fan.  Hope springs eternal.

This low budget short was a great experience for myself and Gary. We’d met at the Running Horse pub one drunken evening in Bracknell a few months earlier in 2005 and immediately bonded over our love of movies and movie-making. Gary was a veteran director of his own videos shot and edited — from his early teens — on VHS recorders or in-camera; and I a budding writer full of hopes and dreams having just finished a MA in Screenwriting at Royal Holloway University.  A decade on those dreams are now shattered and strewn to the winds of time and history as a legacy of bitter experiences lay in our wake. There were some really bad times as well.

This one is a beauty:

So these two great minds conjoined to form the creative team known as Fix Films and inspired by our friend Douglas Hurley and his brother Stuart we decided to make a short film to enter into the BBC New Filmmaker’s Competition of 2005.  The film failed completely to gain any recognition but it gave us a great insight into the filmmaking process.

I’d written the screenplay a year or so before and it, like many films, was based on wish fulfilment:  the desire to wreak revenge on all the bad bosses I had had. Plus, in the subtext was my own vain disgruntlement at desiring a creative career but ultimately ending up with a prosaic office job which made little use of my brain or perceived skills and in the process reduced my existence to that of a clock-punching drone.  Not much has changed there.

It’s very therapeutic to channel one’s experiences and emotions through a cinematic conduit but the actual filmmaking itself is often one of compromises due to budgetary constraints or unforeseen mishaps or actors pulling out at the last minute.   The latter happened to us on the day before the two-day shoot was to begin so I had to re-cast the role of our bad-guy Nigel Hunt.  It was a blessing in disguise because after hunting (sorry) high and low on t’internet I found the wonderful actor Philip Delancy Shooting People and the rest they say is history.  Because Phil subsequently worked on two more of our productions. Do check out Philip’s CV at http://www.philipdelancy.com/ – he’s a fine actor and great bloke too.

Myself, Gary, Doug, Stuart and cast and crew worked TWO long days one balmy weekend at FIVE different locations all those year’s ago and successfully produced a pretty witty little short film.  It has some fine moments and arguably some elements don’t hold up. Personally I wanted to redo the voiceover but in the end we left it.  But Gary did a great job filming, editing and composing the music for the film. Indeed,  for a £150 budget we very much did the script justice and breathed life into a universal desire. I mean, who hasn’t ever had a boss they couldn’t stand or wanted to rain down furious vengeance against?  If you haven’t then you’re probably THE boss!  And we’re coming for YOU!  Up the workers!  Vive l revolution!