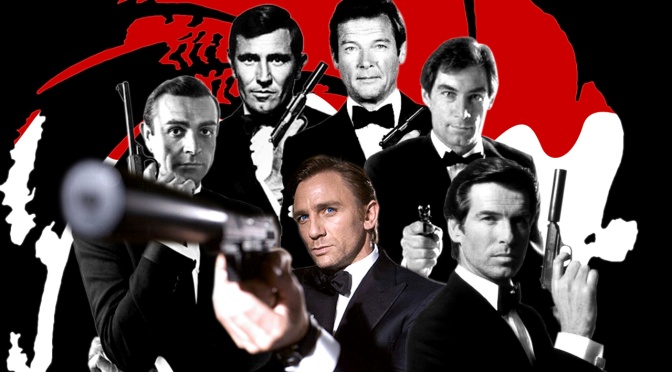 With SPECTRE (2015) looming on the horizon I’ve picked out some memorable Bond bits which make this one of, if not the best, genre franchises ever. I knocked this up during my lunchtime so it’s by no means definitive but there’s a mix of deadly, funny and sad moments. If you have your own please do nominate.

As the classic music kicks in and the Agent points his gun and fires, literally “killing” the audience, you’re immediately hooked!

With the suave delivery of one simple line Connery’s Bond eases into cinematic folklore. Much imitated but never bettered.

Henchmen/women have played a massive part in the series and peroxide-blonde Robert Shaw was a worthy adversary for Bond. This is a great fight: dirty, realistic, confined, brutal and full of suspense.

Love the cat-and-mouse plot of Goldfinger as Bond hunts the megalomaniac while getting into a number of scrapes and close calls; the laser set-piece being one of the most memorable.

George Lazenby was the David Moyes of Bonds inasmuch as he had an impossible job following an icon. But O.H.M.S.S is a really good spy/action film with all the elements of a great Bond movie. Lazenby is wooden as hell but the brave ending is a dramatic humdinger! Bond cries! Bond cries!

Wow! Just wow! Watching this as a kid you think Bond is done for during this pursuit – but NO! Have some of that baddies – this car can swim!

I’m not a big Roger Moore fan as his legacy was besmirched by some dodgy later films plus they became TOO jokey for my liking. However, in his films he had some great gadgets, humour and henchmen to face. None more so that “Jaws” – the metallic-teethed giant who proved impossible to kill. I loved the moment when the writers gave “Jaws” a romance. It’s very silly but just hilarious.

After the comic-book-sci-fi-over-the-top-ness of Moonraker the franchise was brought back to Earth with a grittier and more realistic treatment in For Your Eyes Only. Despite the 80s hair and dodgy score the Yellow Citroen car chase is executed with much wit and suspense by the impressive stunt-team.

Dalton was a great Bond and this is one of my favourite stories as it feels like a proper thriller rather than a series of set-pieces and chases held together by a flimsy plot. Blonde cellists/assassins, Soviet defections, KGB villains, triple agents and the general air of espionage and boys’ own spy stuff make this one of the best plots in the series in my humble opinion.

Bond was back with a bang AND a new face. Pierce Brosnan was a very charismatic Bond and this is his best film. The makers needed to make their mark and did so with an incredible bungee-jumping stunt, followed by explosive shoot-out with the bad-guys! Damned perfection!! Sorry.

Q and Bond’s scenes were always a treat like a Headmaster showing a schoolboy the ropes. Bond’s insouciance was always a treat and the zinger in this is terrific.

So Bond was back with a real proper actor in Daniel Craig and while he lacked the suave look and cheeky humour of Brosnan he made up for it with steely toughness and physical force. This was ably demonstrated in a brilliant opening scene which popularized the “Parkour” phenomenon of the time.

Vesper Lynd is my favourite female Bond lead. Played brilliantly by the enigmatic Eva Green her character is no pushover and more than matches Bond verbally during their first meeting. Later in the story she steals and breaks his heart adding an emotional depth to their relationship not often witnessed in other Bond adventures.

Stylistically speaking Quantum of Solace is a cracking film filled with tremendous set-pieces. While it lacks a decent story/villain it works pretty well as a kind of sequel to Casino Royale. The Opera scene is stunningly shot and edited; the form bleeding into the action to create pure cinema at its finest.

Javier Bardem really brought a wonderful performance to the Bond table in Skyfall. Initially he plays and flirts with Bond revealing a technological brilliance and homo-erotic slant; THEN he switches to full on monster mode displaying horror at M’s lack of “maternal” instinct when he was captured in the field.