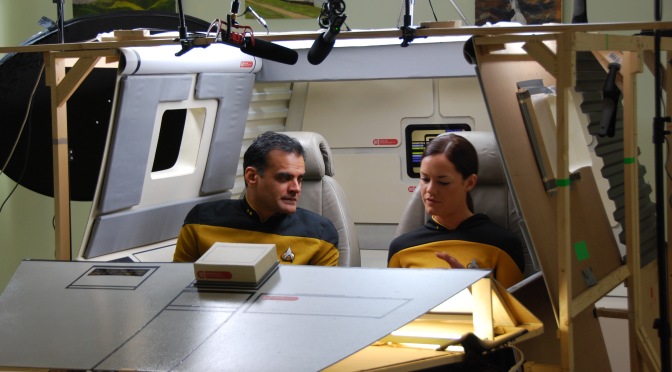 If you didn’t know from reading my blog, as well as writing film articles and reviews for fun, I also write and produce short films.  My short film production website can be found at: www.fixfilms.co.uk.

Our 9th and latest short film is a Star Trek fan production which contains a wholly original story; a romance full of pathos and philosophical drama. Our aim was not to copy characters and space species such as: Kirk, Picard, Spock, Riker, Romulans, the Borg, Bones and Scotty etc. but to create our own set of characters within the Universe. This is a low-budget and affectionate homage to the Star Trek universe and not an attempt to parody or take the piss basically.

Currently we are in the midst of the production and it is going really well.  So, if you’re interested please check out our latest updates below. Our thanks once again to the www.kickstarter.com folks who contributed the budget for the film.

Hope you enjoy some of the latest updates:

Star Trek and all related marks, logos and characters are solely owned by CBS Studios Inc. This fan production is not endorsed by, sponsored by, nor affiliated with CBS, Paramount Pictures, or any other Star Trek franchise, and is a non-commercial fan-made film intended for recreational use.  No commercial exhibition or distribution is permitted. No alleged independent rights will be asserted against CBS or Paramount Pictures.