I grew up watching visions of the English countryside as represented by television shows such as H.E. Bates’ The Darling Buds of May and James Herriot’s All Creatures Great and Small. With such rural narratives you were never far from a beautiful landscapes, wonderfully sunny skies and country folk working together, on the main, as a community. Hope Dickson Leach’s independent British drama is an altogether different beast. It’s a muddy, grieving, bloody and filth-ridden exploration of how tough family and farming existence is.

Featuring some fantastic performances from Ellie Kendrick and David Troughton the story is very simple. Clover (Kendrick) returns from Veterinary College following the sudden death of her brother. While her father is steadily drinking himself to death, she tries to make sense of her sibling’s apparent suicide. Her father, an army man and farmer is living in a caravan next to the battered family home. The farm business is sliding to bankruptcy and their home has been rotting since the Somerset floods a couple of years before. All round their property and livestock are threatened by damp, disease and death.  In short: this is NOT The Darling Buds of May.

Ellie Kendrick, who I recognised from several TV shows including Game of Thrones, absolutely owns the character of Clover. She is seen as weak and unreliable by her father but is in fact an intelligent and resilient character who is prepared to work hard and dig deep for some respect. The plot itself reminded me a lot of the Michael Caine gangster classic Get Carter (1971); accept with a female lead and more cows. As Clover attempts to steady the fortune of the farm, caused in part to mis-management by her father and brother, she also turns detective, stealthily delving into circumstances relating to her brother’s death.

Overall, Hope Dickson Leach has made a really touching personal story of grief. This is a very emotional story about a family torn apart by death on personal and financial levels. I don’t know much about farming life, but while it may be idealized in certain books and films the reality is much tougher. Animals, while commodities are often culled because of disease and farmers are at the mercy of the weather. Moreover, it would appear to be much tougher for women too progress in a male-dominated world which favours sons over daughters.  What the film ultimately shows too, in many brilliantly acted and directed scenes, is we must transcend our differences and work together as one – as family – in order to survive. 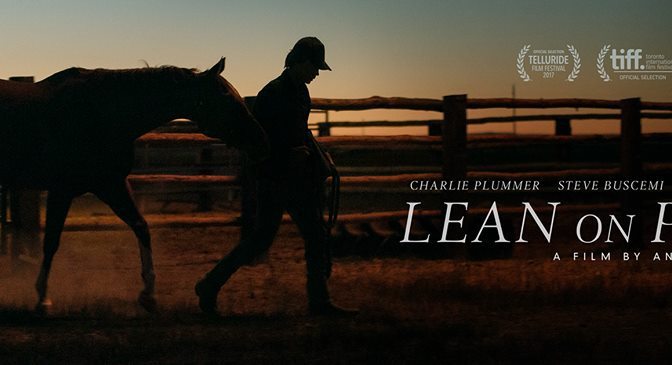 Based on: Lean on Pete by Willy Vlautin

More times than not I go to the cinema to escape the nagging existential doubt I have in respect of life. I watch movies, even the movies based in some believable reality to escape MY reality, my work, my everyday life. Sometimes, though you find a film which will not allow you to escape. It is so relentlessly realistic in its representation of the human spirit that it does not allow you to get away. You are stuck; imprisoned by the misery and hopelessness one can feel with life. Lean on Pete (2017) is such a film.

Adapted and directed by Andrew Haigh, Lean on Pete is a tunnel-focussed character drama based in the dustbowl plains of Portland, Oregon. The lead protagonist is Charlie Thompson who is portrayed with an incredible maturity by Charlie Plummer. The director Haigh and Plummer deserve much praise for creating such an empathetic and troubled character. I mean he’s a good kid who works hard. He jogs everyday in order to keep his fitness up so he can return to playing football at school. Yet, his life suffers from ennui, poverty and family discord. Put simply: Charlie was born with no luck. His mother left when he was a baby and he’s brought up by a father (Travis Kimmel), who loves him, but is somewhat of a nomad; moving from a different job to a different location to a different women every few years.

Movement defines Charlie. He’s either running down roads or walking or driving or leading the horses out. He gets a job working with irascible horse race trainer portrayed by the excellent Steve Buscemi and befriends a rundown racehorse called ‘Lean on Pete’. Charlie becomes, against the advice of everyone, attached to the horse and this affection will drive his actions in the tragic latter half of the film. This is no Disney-kid-befriends-animal-rites-of-passage-fairy-tale but rather a depressing and harsh neo-Western where the American dream is a distant memory.

Overall, it’s a strange thing to say that, while brilliantly filmed by cinematographer Magnus Joenck and directed by Andrew Haigh, Lean on Pete, is a tough film to recommend due to the relentless existential misery on screen. However, there is hope there in Charlie’s character as he won’t give in and just keeps moving trying to find some light at the end of that tunnel we call life.