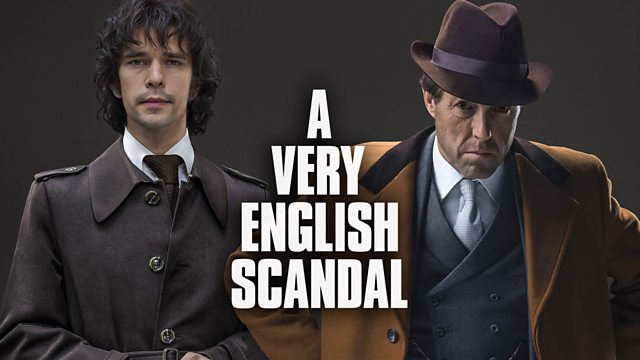 Written by: Russell T Davies – Based on A Very English Scandal by John Preston

I’ve never been a fan of politicians. They are a necessary evil. Perhaps I shouldn’t blight a whole raft of people who may, in their hearts, believe they are trying to do well for their country.  But, I just cannot help feeling there is something not quite right with someone who wants to be in control or lead or rule. I’m of the view that power does corrupt the individual and even though they may begin with great altruistic tendencies they will, ultimately, be poisoned by the job. Or worse than that they have sociopathic tendencies and the prestige of being voted in will feed their greed and lust for control. How does one explain the amount of wars and conflicts there are? Humanity is greatly flawed and the leaders of the so-called free world are more flawed than most.

But, what alternative is there to the capitalist system we have?  Running a country and leading millions of various people must be tough; and difficult decisions must be made everyday. Many have tried the commune lifestyle and socialism has also led, in the Soviet Union and China for example, and, to dictatorial regimes replete with fear, repression and murder. Not that the West hasn’t had its fair share of Dictators and sociopathic leaders. General Franco in Spain is one such fascistic leader and our own Iron Lady, Margaret Thatcher,  hiding within the illusion of democracy, crushed Union leaders, working class lives and whole industrial communities. As such, crooked and nefarious politicians are often a staple of film and television shows. A case in point is the BBC’s recent adaptation of John Preston’s book, A Very English Scandal.

Set against the backdrop of English Parliament and the United Kingdom’s homophobic laws which outlawed gay sex, Jeremy Thorpe, is presented as an honourable man at first. He champions workers’ rights and lambasts the policy of Apartheid in the House of Commons. He has to hide his homosexuality though due to the oppressive legal system and the fact that, as a politician in the public eye, this would seriously harm his ambition to become Prime Minister. When he meets Ben Whishaw’s highly strung stable lad he immediately falls for him and they begin a secret affair. The relationship goes wrong and Thorpe moves on to become the leader of his political party, but an ever increasingly unstable Scott, just won’t go away. That’s when things begin to go awry for Thorpe. Scott won’t take a pay-off and Thorpe won’t give him the National Insurance Card, Scott hilariously demands.

So, like Henry II demanding, “Someone rid me of this meddlesome priest”, he allegedly, as per the script, takes a more sinister route. I won’t spoil it but the events which are presented are both funny and shocking and have to be witnessed to be believed. The privileged Jeremy Thorpe, garners some empathy due to having to hide his sexuality, however, his subsequent decisions to shut Scott down, as presented in this fascinating tale, are shown to be the actions of a spoilt, desperate and sad man wielding power over someone less fortunate. They say absolute power corrupts absolutely but as shown in A Very English Scandal it also leads to incredible poor decisions by individuals from the ruling classes. Indeed, the main reason I dislike and distrust politicians in general is they can and should afford to be better behaved and more compassionate than those they lead.