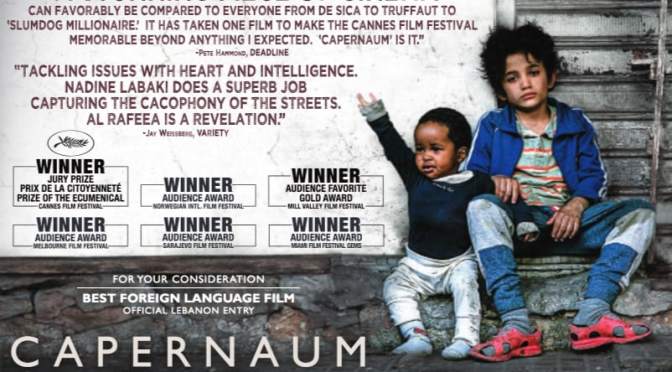 The recent Oscars brought up more than its’ fair share of ceremonial, broadcast and social media celebration and moaning from the film creatives, public, critics and privileged millionaires alike. But hey everyone’s entitled to their opinion and has the freedom of speech to express said opinions about what should and shouldn’t win such frivolous industry trinkets. It’s a bit of fun and gets everyone talking about movies, society and life, which is always a good thing.

Yet, every now and then a film comes along which, while nominated for an award, does not win the prize it deserves. That film is the heart-ripping, social drama Capernaum (2018). This Lebanese film is one of the most emotonally impactful films I have ever seen and should not just have won ‘Best film in a Foreign Language’ at the Academy Awards, but should have won ‘Best Film’, in my humble view. While Roma (2018) was an expertly crafted love letter to Cuaron’s childhood and the women he grew up with, its’ characters are very passive and the slow moving style left me feeling tepid. Capernaum, on the other hand, is anything but tepid, as its’ hero is a dynamic firebrand who you cannot help but root for.

Set in contemporary Lebanon, the story is structured around a court-case where lead protagonist, Zain, a twelve or thirteen year old boy, is seeking to divorce his parents. Extensive flashbacks then reveal why Zain feels this strongly about his life and the hell he has to endure to survive and protect those he loves. Zain’s existence, like many street kids, refugees and families in Beirut, struggle daily under threat of death, disease and exploitation. When his younger sister is sold by his parents to their landlord to prevent eviction, Zain goes crazy. Following a violent row he is thrown onto the streets and is left to fend in the dirt and shadows. He find kindred friendship with Rahil, an undocumented Ethiopian woman, and Zain helps mind her young son, Yonas. Here the narrative screw is really turned as their lives spin further out of control.

With incredible scenes of documentary realism the director Nadine Labaki has delivered such a powerful in your face and frantic style. The streets of Beirut become a legal, social and religious prison for the characters, as forgers, paedophiles and traffickers threaten to rob the souls and bodies of Zain and his like. Moreover, the narrative makes incredible points regarding existence, posing whether people should be brought into the world to such suffering. Indeed, not all characters are as tough as Zain, who’s caring, resourceful, cheeky, tough, entrepreneurial and a born fighter.

I cannot speak highly enough of this film. If I ever feel down about my over-privileged life, then I just need to think of these characters and I will be humbled. For sure it is over-the-top in its’ melodramatic depiction and there are some unlikely narrative elements toward the end, but I did not care about those. It moved me immensely and the director and filmmaking team deserve so much credit turning twelve hours of shooting footage into such a coherently moving portrayal of existence. They even find time for some humour amidst the tragedy. Further, the actor who gave us Zain is himself a refugee and had never acted before, so to capture such energy on screen is amazing. Lastly, next time I selfishly think “my life sucks”, I will picture Zain pulling Yonas around the dusty streets of Beirut in an aluminium pot and be completely humbled.

3 thoughts on “کفرناحوم‎ / CAPERNAUM / CHAOS (2018) – CINEMA REVIEW – One of the most heart-breaking films you will ever see!”