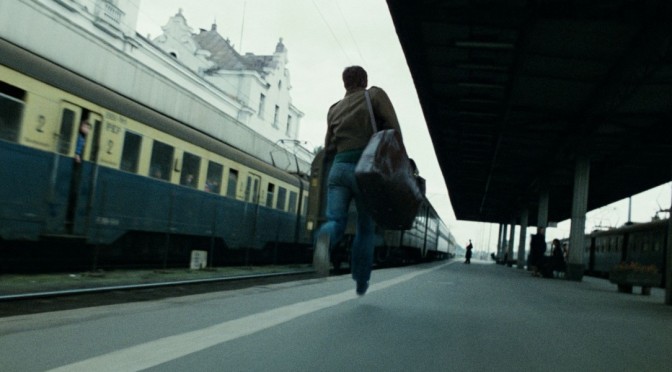 The English translation, according to Google, of the original title of Kieslowski’s classic film, PRZYPADEK, is CASE. Clearly this was considered too simpler a name to give to such a complex film, thus it become known as the more evocative, BLIND CHANCE (1987), when distributed to Western audiences. The title CASE is quite appropriate as the lead character is a case subject in a trio of varying narratives. The brilliant screenplay splits the lead protagonist’s fate into three potentialities and shows how random chance can shape people’s lives. If you think this idea sounds familiar then the films SLIDING DOORS (1998) and RUN LOLA, RUN! (1998), used the same concept in the romance and crime genres, respectively.

Set against the background of Communist Poland, the narratives follow Witek, a medical student at a crossroads in his life. His father dies and he questions whether he wants to be a Doctor. He takes a break from studies and gets a train to Warsaw to explore future possibilities. Kieślowski dramatizes Witek’s journey as a series of three strands, where fate can be decided by chance as well as choice. The splitting point of the story is Witek rushing to catch his train. In the different scenarios he is shown to board the train and not get on the locomotive. Structurally the film is fascinating as the three different episodes explore Witek’s life from a political, spiritual and personal perspective. Popular Polish actor, Bogusław Linda, brings great empathy and humanity to the characterisation of Witek. Each of the strands finds him in difficult situations politically, romantically and philosophically. However, he is a very sympathetic character, who I very much wanted to succeed, because he always tries to make honest and righteous choices.

If you find yourself absorbed by compelling human dramas that make you think, then you will definitely enjoy, BLIND CHANCE (1987). Kieslowski is a truly masterful filmmaker who creates complex ideas and emotions, but delivers them in a digestible fashion. Kieslowski is not overly intellectual or pretentious, even when positing deep existential questions. Are we tied to fate or do we have some element of control over our lives? Does pure chance rule our world and should we fight against our fate? As such, the film is both fascinating analysis and absorbing drama, because Witek is such a believable character. He desires a career, friends, love and belonging. Moreover, Kieslowski uses Witek as a case study to critique both politics and religion, at the same time opining the importance of loyalty, love and family.

Revered Polish filmmaker, Kieślowski, wrote and directed BLIND CHANCE (1987) in 1981, but due to heavy censorship it was not released for a number of years. Even on initial release many scenes which were cut as they were considered to have critiqued the Polish government. The version I watched on Arrow Video thankfully was restored expertly with just one scene missing. The crisp restoration also highlighted Krzysztof Pakulski’s exquisite cinematography. Indeed, while the use of natural lighting techniques is quite commonplace today, the mood and atmosphere of the composition really compliments the seriousness of Witek’s various journeys. Overall, while there are no easy answers to the questions raised, Kieslowski’s remarkable ending to the film will leave you in no doubt as to his feelings toward life’s rich but fatalistic tapestry.