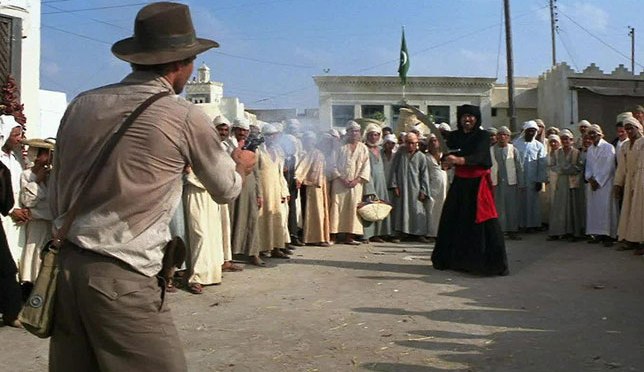 It’s Saturday morning in London, so what better than to conjure up memories of classic weekend film entertainment. Because I recall, one Saturday, watching the monumental adventure classic, Raiders of the Lost Ark (1981), when I was eleven at the ABC Cinema in Fulham with my nine-year old brother. Nothing like a great film to bring back happy memories. After the film ended, we were exhilarated and hungry. We decided that rather than spend our remaining money on bus fare, we’d prefer to walk home to Battersea and share a bag of chips in the rain.

The three mile walk lasted no time at all as we were full of excitement about the incredible film we’d just witnessed. Gigantic rolling balls, snakes in cockpits, treacherous monkeys, villainous Germans, a hard-drinking heroine, unforgettable fights, shootouts, chase scenes galore, and a whip-cracking, charismatic, never-say-die archaeology Professor as our leading protagonist. Those Nazis never stood a chance chasing the ultimate McGuffin in the lost Ark of the Covenant.

With a film like Raiders of the Lost Ark (1981), you essentially have one classic scene after another. So much so you could do a top twenty easily. I have chosen to focus on an earlier middle act chase sequence which ends with one of the greatest punchlines ever committed to celluloid. Indiana Jones (Harrison Ford) is chasing baskets around the marketplace searching for Marion (Karen Allen). It’s an incredibly well directed and edited scene. Moreover, it’s funny, exciting and full of twists; including that darned monkey! John Williams music is utterly wonderful to boot. Mid chase Indy is faced with a swordfighter from his pursuers. The fighter displays an amazing set of skills and we wonder how our hero will escape certain death. Well, Indy just shoots him!

The story goes that a massive battle was planned but Harrison Ford had food poisoning, thus the scene was rewritten. Thus, movie magic was conjured, not from expert planning, but from having dodgy guts! They should have stuck to sharing a bag of chips. But then we wouldn’t have this amazing end to a magnificent movie sequence.