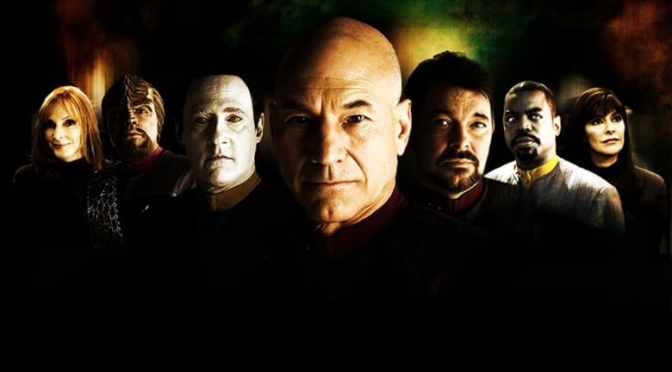 TO BOLDLY REVIEW #13 – STAR TREK – THE NEXT GENERATION FILMS!

I have to admit I started getting Star Trek fatigue having watched seven seasons of The Next Generation, the original series, and films over the last couple of years. Thus, I had a bit of a break. But now am ready to visit the many series of Deep Space Nine.

What of the The Next Generation feature films though? The creative danger of adapting television series into feature films is that they often fall into the trap of being two episodes stuck together without the texture , scope or feeling of a cinematic presentation. Not that the studio executives will care ultimately, because their films will likely make money due to the desirous power of the show’s fanbase. How successful were the TNG film releases in avoiding the pitfalls of small to big screen adaptations? Let us see.

Generations sees Captain Kirk (Shatner) and Captain Picard (Patrick Stewart) meet across the time-streams in a giddy mix of philosophy and temporal variance. Malcolm McDowell as an obsessive scientist, Soran, plays a good baddie. However, this is more a collection of fascinating concepts conjoined unevenly to get Picard and Kirk on screen together. What it lacks in proper cinematic drama and suspense, it serves the fans well with a fun mix of the original and Next Generation series actors. Who doesn’t love seeing Patrick Stewart and William Shatner inhabit their characters with gusto trapped in the mind-bending realm of the Nexus?

In First Contact, Picard and crew fight the formidable Borg with the former flexing both his verbal and physical muscles. This is great and easily one of the best Star Trek films. Patrick Stewart is always brilliant, but you can see his Picard is driven, Captain Ahab-like, to pursue revenge against the Borg, even ignoring Starfleet orders along the way. Alice Krige as the Borg Queen is particularly memorable too. Time travel is integral again to an involving plot. Senior crew members led by Riker (Jonathan Frakes) go back in time to when warp was invented by unlikely legend, Zefram Cochrane (James Cromwell). With two strong narrative strands combining to create superb drama and conflict, First Contact, is both entertaining and moving, standing as a fine tribute to thirty years of Star Trek.

With a title suggesting uprising and revolution, Insurrection rather slows the pace down when compared to the dynamic, First Contact. Moreover, in the “fountain of youth” themed plot, Captain Picard falls in love, with Patrick Stewart flexing his romantic muscles here. I actually enjoyed Insurrection with the crew of the Enterprise endeavouring to protect a peace-loving community called the Ba’ha from several surprising foes. I am aware the script went through a number of drafts and iterations, so the narrative holds up surprisingly well. The thematic exploration of the prime directive, vanity and mortality provide emotional depth. Although the biblical metaphors of Picard leading the natives to the “promised land” is a bit much. Still, F. Murray Abraham is brilliant as antagonist, Ru’afo, even under all the prosthetics. Overall, Insurrection, while a mixed bag of ideas and story strands, is certainly very entertaining.

More interesting for the casting choices rather than the strength of the screenplay, plot and themes, Nemesis (2002) was unfortunately a box office failure. It isn’t surprising though as Stuart Baird was arguably not the right director for the franchise, as the film is helmed like a generic action film without the essence of true Next Generation style. Having said that I quite liked the concept of Picard facing Shinzon (Tom Hardy), an enigmatic character who knows a lot about the Enterprise captain. Despite some energetic set-pieces Nemesis (2002) doesn’t quite catch fire dramatically, but Stewart pitting his acting chops against a very young, Tom Hardy, provides some frisson of excitement. Mostly though this could be any bog-standard sci-fi story and is a disappointing final TNG cinematic salvo.

One thought on “TO BOLDLY REVIEW #13 – STAR TREK – THE NEXT GENERATION FILMS!”