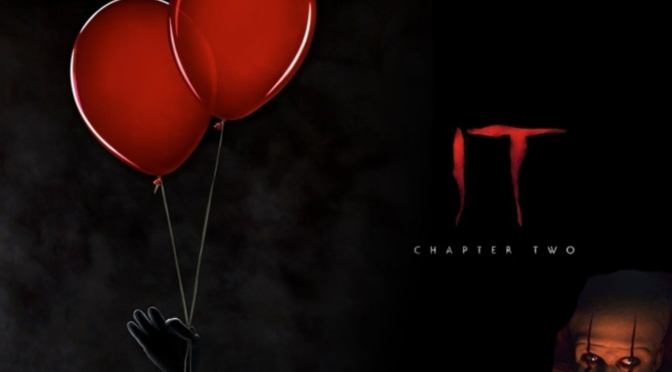 Based on: IT by Stephen King – Screenplay by Gary Dauberman

Stephen King is clearly a genius. To be able to maintain creativity and longevity as a writer, plus give birth, as it were, to any number of iconic narratives, characters and events is a testament to his massive energy and talent. When I was young one of the scariest things I ever saw on TV was the horror serial Salem’s Lot (1979), which was about vampires taking over a small town. His book Carrie (1976) was also adapted into one of the best horror films of the seventies too. Moreover, during the 1980s, TV and cinema screens were peppered with King’s work notably: The Shining (1980), Stand by Me (1986) and the under-rated Pet Semetary (1989).  In 1990, Tommy Lee Wallace directed a mini-series of IT, with the terrifying Tim Curry as Pennywise the Clown. IT proved to be an excellent horror story until the – faithfully sticking to the novel of course – ridiculously silly ending.

Flash forward twenty-seven years, IT: Chapter One (2017) and Pennywise (Bill Skarsgard) was back to haunt the dreams, drains and sewer pipes of Derry, Maine, using subconscious manipulation and fear to lure kids and adults to their death. Directed by Andy Muschietti, the film was a big box office hit and it’s a highly entertaining genre horror movie full of fantastic set-pieces. Thus, it was no surprise we got IT: Chapter Two, with the terrified kids now older, but equally afraid and under threat from that devilish clown.

In preparation for IT: Chapter Two, I re-watched IT: Chapter One and must say I enjoyed it even more second time round. King’s imagination and ability to craft a great story full of memorable iconography such as the clown, balloons, deathly sewers, small-town existence and the strong theme of outsiders/losers versus bullies/abusers resonate perfectly within the jump-scare-horror tropes. The second film, though longer, doesn’t really develop the characters as much and we get more of the same scary scenarios but this time with the adults in place. Having said that the cast led by Jessica Chastain, James McEvoy and the brilliant Bill Hader create excellent characterisations and reflections of their younger selves.

Pennywise himself is arguably not as scary second time round either because his fear factor is lessened by familiarity. But the assorted monsters the ‘It’ creature conjures up still hold some surprise for our protagonists to face. The scariest was Bev’s demon, a creepy old woman who frightened the life out of me during the trailer and the film. What I also liked was the film confronting the frankly insane nature of Stephen King’s actual monster, which we are advised has existed since Earth even began. The filmmakers succeed where the 1990 mini-series failed, in making this inter-dimensional behemoth somehow plausible. I especially liked the in-jokes referencing the criticisms about King’s works often having terrible endings.

Thus, overall, I enjoyed this final chapter horror adaptation of King’s monster novel; and the ending worked this time. While there is a lot of repetition and recycling of horror moments of the first film, the themes of confronting and defeating bullies and demons from the past and present resonates powerfully. Lastly, like many of King’s works, it’s about the power of friendship and strength in togetherness. Because, only together can we overcome the fear of real, surreal and unreal demons lurking in the darkness of our towns, cities, rooms, homes, sewers and most of all, our minds. 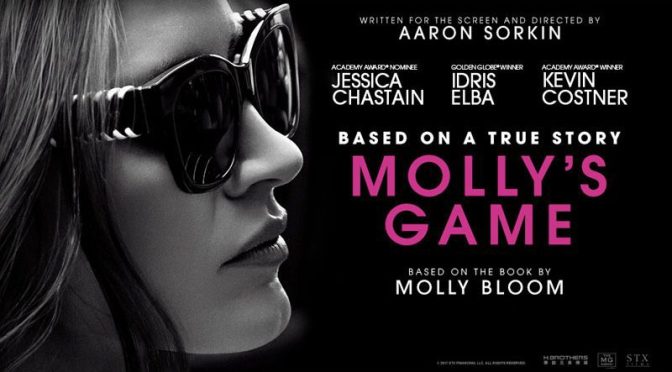 Based on: Molly’s Game  by Molly Bloom

As a species we like to have fun. It makes us feel good to manufacture a chemical reaction in our minds and body to create a high and distance ourselves from our own mortality. One such means of fun is gambling. It is fun right: placing bets on the outcome of a game be it chance or skill?  I mean it must be fun because so many humans do it, right? Nothing bad comes of fun surely!  Nothing bad comes of gambling? Wrong! Of course it does.

Gambling is one of the stupidest things a human being can do. You are willingly handing your money to a bookie or competitor or casino in a game of chance in the hope of winning money. Your hard earned cash is at the mercy of: the turn of a card; the roll of a dice; the kick of a ball; the speed of a horse; and the spin of a wheel. To me THAT is crazy. I know because I used to gamble on the horses and loved it but not when I lost. That high soon dissipated and fun twisted and dug and before you know it you’re in a low-hole and light is getting further and further away the deeper you go.

There are many players out there who will say poker is not a game of chance. It is a keen game of skill relying on intelligence, guts and psychological warfare. I would go along with that but it is, unless fixed, always reliant on major elements of fate. There are a plethora of multi-millionaires out there who have got rich playing poker no doubt. Yet, I bet there are some sob stories too of players who have lost everything at the table.

Such characters litter Aaron Sorkin’s excellent biopic of poker “madam” Molly Bloom.  You’ve got the bankers, hedge-funders, cowboys, sporting legends, A-list actors and gangsters; all co-mingling around a green baize table facing off over the turn of a card. For me it’s an ostentatious representation of hedonistic narcissism. I mean: that money could be used for good but instead is being used for pointless card games which only serve to boost egos and satisfy bottomless, black-hole addictions. Nonetheless, that doesn’t mean the film is not entertaining because it is.

Sorkin asks us to, at times, empathise for a criminal in Molly Bloom, however, she must be admired for her ballsy attitude, intelligence and organisational skills. Much of the kudos for the film goes to Sorkin’s fantastic script and the sterling performance from Jessica Chastain; who possesses a magnetic on-screen aura reminiscent of the Hollywood stars of yesteryear. Couple of reservations in that with a story about a powerful woman it was disappointing that Costner’s father and Idris Elba’s lawyer got the best speeches at the end of the film. Moreover, at no point did I REALLY care about anyone, aside from Molly when she gets in too deep. But that’s the point: the professional poker world is a shark pool full of predators and Bloom’s story is a complex one, raised above that of your standard crime drama by a zinging screenplay and Jessica Chastain’s nuanced acting.