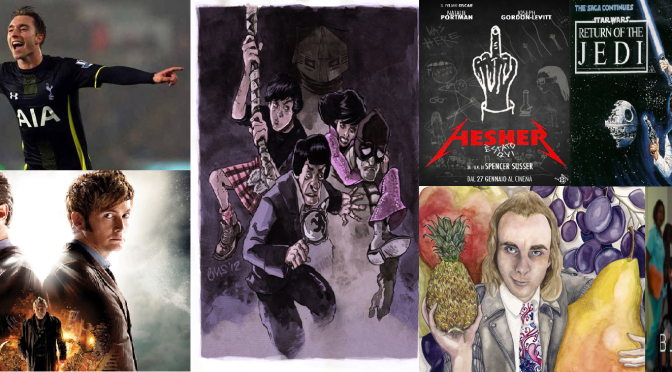 SAINTS AND WINNERS:  A WEEKLY REVIEW

Seasons greetings! Double busy leading up to Christmas with lots of cultural stuff going on so I’ve consolidated all my viewings, derring-dos and reviews of last week into one manageable post.  Enjoy!

The Massachusett’s born fortysomething everyman comedian is an absolute straight-talking joy.  He sails close to controversy on many occasions giving political correctness no mind at all. But it’s not shock for shock’s sake but rather well thought out and cutting rants covering domestic violence, plastic surgery, guns and the cult of celebrity.  I particularly love his cracking-take-no-prisoners-delivery and he is very adept at imaginary on-stage conversations which are relentlessly hilarious, hitting his targets full in the face.

From the 6th season of the classic science-fiction serial, with Patrick Troughton as the eponymous time-traveller, these two episodic stories find PT on great form with Zoe and Jamie as his companions.  The villains of each piece are The Master (not that one) of the Land of Fiction and The Ice Warriors in Seeds of Death.  The latter foes are particularly nasty pieces of work although they do find themselves undone if you turn the heating up a bit. Troughton is a fantastic Doctor playing the fool while hiding a devious mind as he allows the enemy to think they have the upper hand before prevailing victorious.

I’ve really enjoyed Matt Smith’s final season as the Doctor and some of the episodes have provided some cracking televisual entertainment.  Some of the concepts and plot twists, I must admit, I found initially baffling but that was because the writing was so fast-paced and spirited.  But overall Steven Moffat and his whole production team deserve credit for a fun, funky and very dark (where Amy and Rory were concerned) season which also introduced a sparkling new companion in Clara (Jenna Coleman).

Personal highlights for me included:  Asylum of the Daleks, The Angels Take Manhattan, Cold War, Hide and the 50th Anniversary episode The Day of the Doctor which had THREE Doctors and a history-bending game changer.  Brilliant to see John Hurt appear as The War Doctor and Tennant return also.  I am very pleased too that I have watched the Time of the Doctor too and I am finally onto Peter Capaldi’s Time Lord; which is how this latest obsession began.

This obsidian painted comedy about family grief features Joseph Gordon-Levitt as Hesher:  a crazed-heavy-metal-anti-heroic-outsider-mentalist. Hesher crashes into the lives and the house of the Forney family as they attempt to get over a recent death.  And while he seems to be a negative reality void sucking the life out of them he kind of becomes an anti-angel providing some kind of weird and wonderful family therapy.

It’s a difficult film to get into initially as it’s quite bizarre but ultimately it’s got a great little black heart of gold showing that togetherness will overcome.  Despite an A-list cast including Natalie Portman it’s very much a low budget-under-the-radar gem with a loud heavy rock soundtrack.

Myself and Brett Sharpe have formed the Dr Who-Paul-Foot-Spurs-Supporters Fan Club. It’s very niche but inclusive club which anyone can join if they like those particular cultural phenomena. Our inaugural Christmas outing was to a secret location in London and involved seeing the master of merry mirth — Paul Foot — putting on his own little show for his fans or connoisseurs as he calls them.  It was an incredible show made all the more marvellous because it was in an intimate venue above a pub. I cracked up throughout as Foot treated us to some of his greatest comedy hits including: RADA story; EUROSTAR story and how to get REVENGE on BED & BREAKFAST LADY.

Here’s a surprise: I love Star Wars!  Not the prequels but the original films. I saw them all at the cinema and they are three of the most perfect piece of entertainment one could hope for. They captured the imagination of a wide-eyed seven, ten and thirteen year boy (that’s me!) when each of the trilogy was released. With their: spaceships, creatures, heroes, mercenaries, droids, monsters, light-filled swords, noble Knights protecting the Empire and rebels battling gigantic Death Stars – WHAT’S NOT TO LIKE!    I watched the final film in the trilogy at the BFI Southbank’s majestic cinema NFT1 and Return of the Jedi looked wonderful. I laughed, gasped and cheered in all the right places as Luke, Leia, Chewbacca, Han Solo etc. fight and defeat the Dark Side in a galaxy far, far away.

I went to White Hart Lane to watch Spurs against Newcastle in the Capital One cup and what a terrific performance they put on. It was tight for a while against an under strength Toon – who had been in good form in the League – but a mistake from their young keeper allowed Bentaleb to score the first. Chadli made it 2-0 with a fine run and shot before Kane and Soldado finished the Northerners off!  The great news is we got Sheffield United in the semi-final so MUST have a positive chance of getting to the final at Wembley.  Since this game we also beat Burnley 2-1 at home so allied to our last-gasp win against Swansea the Pocchettino’s Spurs are on a grand roll for now.

I love Bill Murray. The guy is a comedy legend and general all-round media eccentric.  He’s been in some terrible films and some classic movies. The one over-riding consistency in all his movies are he is ALWAYS brilliant.  In St Vincent he plays a curmudgeonly scoundrel who sleeps with hookers and drinks himself unconscious. When Melissa McCarthy’s single mother Maggie and her son Oliver move in next door Vincent becomes an unlikely babysitter to the boy.  It’s an okay film which promises much dark and bittersweet humour in the vein of Bad Santa (2003).

However, while Vincent starts off as a bit of a scumbag he is redeemed far too easily for my liking and while the script is very witty it runs out of steam just past halfway and even Murray cannot save an overly saccharine and sickening ending.  Also, Naomi Watts is wasted as an offensive stereotypical Eastern European prostitute while McCarthy is criminally underplayed given very little to do.  A disappointment overall as all the plot strands are resolved easily and without any real comic or dramatic thunder.