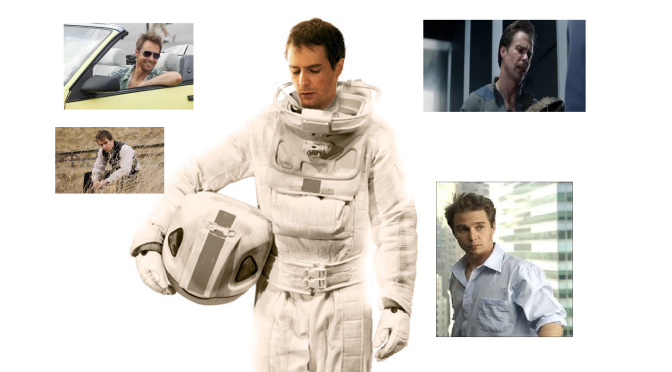 There are some actors who just walk between the raindrops when they’re on-screen; inasmuch as everything they do seems so effortless. The magnificent Sam Rockwell is one of those actors. He’s not a big star but he certainly shines like one in most of his roles. While the likes of Matthew McConaughey, Meryl Streep and Christian Bale are tremendous actors, the audience can clearly SEE the work they are committing to; yet Rockwell just glides through a performance charming you and pulling you in with his guile and a golden smile.  He’s just good in everything. Here are five performances I particularly enjoyed. (Note: glaring omission from the list LAWN DOGS (1997) which I ashamedly have not seen. I apologise to my fan.)

**THERE BE SPOILERS AHEAD**

THIS is the film where Rockwell first hit my consciousness and it is a wonderful sci-fi comedy which gently mocks but also affectionately homages Star Trek and its legion of fans. It has a terrific ensemble cast including Alan Rickman, Sigourney Weaver, Tim Allen and Tony Shalboub.  Plus, the effervescent Rockwell stealing scene after scene as the kind of sidekick/bit-part show cast member who usually gets killed first.  The film is a bona fide cult classic and I urge you to see it if you haven’t.

I picked this because it’s a VERY effective psychological horror film which kind of fell through the cracks on release and is worth catching online or DVD.  It’s an extremely well written, directed and performed “demon child” film but done with nuance rather than the overblown histrionics of the devilish OMENesque movies.  Rockwell plays a loving father and husband and it’s one his more complex roles showing pain and confusion rather than the easy charm one has come to expect from him.

Talking of which Rockwell ratchets the charm right up to ELEVEN in this wonderful-rites-of-passage-summer-of-love-coming-of-age-dramedy.  He plays an overgrown man-child who refuses to grow up and accept responsibility – preferring to play the fool at a Water Park!  There he takes the awkward teenager Duncan (Liam James) under his wing and trains him to party, have fun and gain confidence with girls.  Rockwell’s just so goddamned likeable and acts as a positive ‘father’ figure to Duncan in contrast to Steve Carell’s negative philanderer Trent.

THE ASSASSINATION OF JESSE JAMES BY THE COWARD ROBERT FORD (2007)

Andrew ‘Chopper’ Dominik’s moody Western is one of the BEST films I have seen from the last 10 years.  It was pretty much a box-office flop but everything about it screamed greatness to me: stunning cinematography; elegant pace; resonating themes and subtext regarding fame and celebrity; wonderful cast; beautiful vistas and so on and so forth.  Rockwell excels in a supporting role as Charley Ford who gets caught between the eerie homo-erotic hero-worship-then-rivalry of his brother Robert (stunning Casey Affleck) and eponymous Jesse James (never better Brad Pitt).  The film moves at a glacial pace, building character and suspense, while in between the sporadic bursts of violence startle and raise the pulse in an altogether memorable cinematic experience.

In MOON not only do we get one Sam Rockwell but we get hundreds for the price of an admission fee.  He is outstanding as the isolated astronaut (AND doppelganger) mining the moon for helium-3, who having met another version of himself is thrown into an existential crisis.   What it lacks in budget it makes up for with the use of ‘authentic’ old-fashioned models. Moreover, the story engages intellectually, then dramatically before eventually tugging at the heartstrings; all the while introducing fascinating sci-fi concepts.  Director Duncan Jones shows Christopher ‘Interstellar’ Nolan how to make a humanist sci-fi masterpiece for a fraction of the cost and in Rockwell he has a tremendous co-pilot. A film to watch over and over and arguably Rockwell’s finest performance as an actor.

One thought on “MY CINEMATIC ROMANCE #3: SAM ROCKWELL”