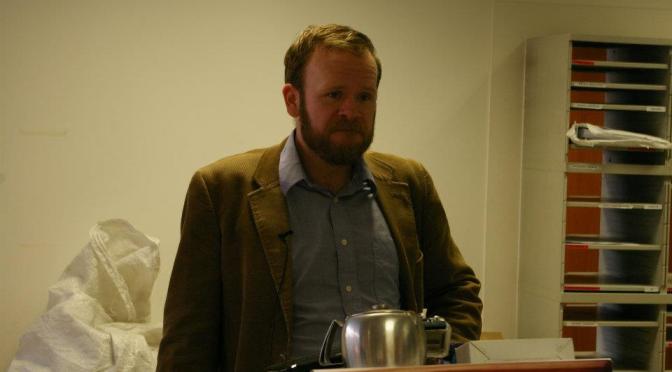 THE ‘WORST’ OF GEORGE RYEGOLD – MUSEUM OF COMEDY REVIEW

In January 2008 I first ventured onto the stage of a comedy night about to tell some ill-prepared jokes for five minutes in a Shepherd’s Bush pub beautifully named the Defectors Weld. Well, there was no stage and just a microphone and darkly carpeted floor and some twenty or so people and I was awful. I was nervous and drunk and goddamned awful. My good friend Alan Wood actually gave me this one-line review:

“Paul! You were pissed; slurring your words; but you still got some laughs. I couldn’t believe it!”

Damning praise indeed; yet that night spurred me on to an incredibly average comedy career/hobbyist pursuit which reached the “dizzy” heights of the some lowly paid in-town and out-of-town gigs, open spots at the London Comedy Store and Banana Cabaret plus the deep respect of my peers in the comedy world. Okay, the last one is a lie!

But writing and performing comedy has been a wonderfully creative experience for me. The highs are tremendous, notably: writing and telling jokes that get laughs; the long drives to far flung beauty spots of broken Britain such as Wellingborough, Portsmouth, Birmingham and Ipswich; and not forgetting my unerring ability to partially fill small rooms at the Brighton and Camden Fringe (#sarcasm). Jokes aside, the most joy has derived from the multi-talented individuals I have met on the comedy circuit.  These writers, actors, clowns, filmmakers, musicians, photographers, promoters and other general lunatics have provided a healthy course of rich fulfilment to the last eight years of my social life.

On that fateful night in 2008 when I burst my comedy hymen I first experienced the musings of one such artist: the verbose vim of Doctor George Ryegold.  Here was a recently struck-off quack now venturing into the world of entertainment regaling tales of run-ins with the General Medical Council; his flailing relationship with his mother; scaring women, children and the elderly with his unorthodox procedures; plus intriguing medical advice for somewhat gross ailments. Indeed, Ryegold’s set of anecdotes about malignant tumours, rotting ball-bags, matted pubic excrement, emergency maternal fellatio and the joys of narcosis made an episode of Embarrassing Bodies seem like an episode of Peppa Pig. It was dirty, disgusting, low-down eloquent filth and I loved it!

Of course, you may know the Doctor is not actually a Doctor but the comedy creation of brilliantly talented actor Toby Williams. His career has deservedly progressed from performing his carnal comedy creation to winning awards for Ryegold, including: ‘Amused Moose Laughter Award Top 10 Comedy Show’ at the Edinburgh Festival Fringe 2013, ‘Scotsman’s Top Five Comedy Shows at the Fringe’ 2012, winner of ‘Best Show’ at The Leicester Comedy Festival 2011 etc. He has also carved out career acting in many short films, adverts, television shows and now feature films including the recent cult hit High Rise (2016).

So, flash forward eight years and there Dr Ryegold was, for apparently the last time, on stage at the Museum of Comedy in Bloomsbury doing his most beautiful worst; delivering an hour of lurid, loquacious and lovely smut with that smooth, deep voice; like Richard Burton reading Roger’s Profanisaurus. If it was his last show it was a wonderful send-off and hearing those sordid stories again took me back to those moments when I either shared a bill or went specifically to see the Doctor’s fantastic filth-laden hour shows.

The comedic power of the act is in the exquisite writing, rich voice and chronographic timing of delivery. But it’s not shock-for-shock’s case as there is a pathos to the character plus dark reflection on the monstrous nature of humanity which breeds murderers such as Ian Huntley, Fred West and Harold Shipman; all of whom are box-ticked by Ryegold during this fine wrap of comedic cocaine.  Ultimately, Ryegold racked up a succession of hilarious lines and crossed too many boundaries to mention, as the Doctor administered his final stroke of genius to an adoring crowd of patients. I for one was glad to be there and make it out very much alive.

Here’s some examples of his work: