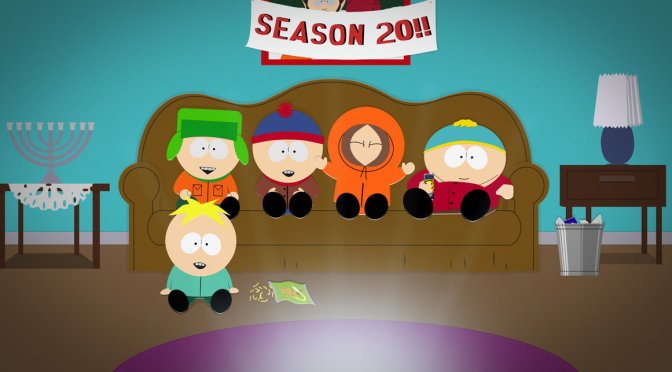 The latest season of South Park ended mid-December time and so I’m a bit tardy with the review. This is mainly because I decided to watch all ten episodes back-to-back over the Christmas holidays, and in some ways, this was a mistake. I say this because I think sometimes as viewers we have to take some criticism too. In hindsight I definitely should NOT have binge-watched this season as it was so complex and plot-heavy with many themes and interlinking plot strands. In fact, similarly to the more satisfactory Season 19, this season transcended the usual mix of puerile and satirical comedy it’s known for, to become something much more.

**SCREW YOU GUYS – THERE ARE SPOILERS!”

Over ten episodes South Park once again became a huge mirror that reflected many of the events occurring in the USA and the world in general.  The biggest event was of course, the Presidential elections which saw Mr Garrison and Caitlyn Jenner representing the Trump/Republican side and Hilary Clinton, of course, representing the Democrats. Amusingly they were referred to as Douche and Turd Sandwich respectively; calling back the classic episode where Stan is banished for refusing to vote.

Garrison soon realises he’s made a terrible mistake in running as he has NO policies and tries to extricate himself from the race. Thus, much of the comedy deriving from this narrative strand was brilliant and made me laugh throughout the season; especially during the episode Oh Jeez when Garrison won and went into full Trump mode. By the end of the season he’s shown to be a complete buffoon open to manipulation by Mr Slave and Kyle Broflovski when it comes down to the bombing of Denmark. But, hey, that’s a whole different story!

A TROLL IN THE PARK

The second major narrative line in this season was Gerald Broflovski (Kyle’s Dad) being revealed as an uber-Troll online called Skankhunt42. He begins by trolling his son’s school before moving onto cultural icons and then the whole of Denmark itself. Gerald, who usually represents the liberal side of the show, is seen becoming a vicious sneak who enjoys bullying for the humour. However, being the intellectual hypocrite he distances himself from the nerdy-no-life-outcasts he ultimately gets lumped in with.

Gerald’s actions eventually spiral totally out of control by the end and, while South Park itself has been a massive critic of celebrities and government figures in the past, it is quite justified in lampooning the cowardice of online trolls. These sad individuals hide under the bridges of social media feeding their tethered egos and weak personalities for the benefit of either humour, revenge or to obtain some idea of power.

In the episode The Damned, Gerald is literally pissed on by his wife in order to extricate himself from being rumbled as an online troll. That online bullies are shown to be mainly shut-in losers as opposed to Jocks, demonstrate that bullying can be done by anyone and needs to be pissed on from a great height. Lastly, the monstrous rise of Garrison to power also highlights the fact that hair-brained Trump has become the biggest troll in the world.

The theme of hyperbolic social media behaviour was supported by the further strand of South Park Elementary School students committing “suicide” by leaving Twitter. A character named Heidi is even mourned by her class during the episode Skankhunt even though she is actually in the class!  Also, believing Cartman to be the troll ‘Skankhunt’ the kids gang up and ‘kill’ his electronic devices, burying them in an Evil-Dead-Cabin-in-the-Woods-horror-film-homage. The internet and social media is therefore cast as an extension of the playground; with kids and adults giving their social media live’s more importance than real life and move away from actual intimacy and human contact.

Consequently, Cartman himself goes the other way and falls in love with Heidi and their relationship is quite touching over course of the season. It’s especially funny as it plays with the audience’s expectations and the other kids think it’s all part of some Cartman uber-plan. Indeed, Cartman’s arc in this season is interesting as it seems they tried to make him more sympathetic. At first his feminist leanings are part of some scheme to undermine the girls’ sit-down protests during the opening Member-Berries episode. But eventually it turns out he does find Amy Schumer’s “vagina” comedy actually funny.­ Alas, the storyline kind of runs out of steam by the episode 9, Not Funny.

Gender politics and the boy-versus-girls dynamic further complicate the narrative when Butters leads a protest against the girls. Butters and the boys who have all been revenge-dumped by the girls because of ‘Skankhunt42’s vicious actions decide to protest too. So, they get their dicks out during the U.S. national anthem; which in itself satirized last year’s “sit-down” protests that occurred during U.S. college sporting events.  I myself was not as educated about these particular occurrences but as usual Parker and Stone went to ridiculous lengths to demonstrate that however noble the cause, once everyone jumps on the bandwagon the protests become diluted and lose their power. Moreover, such stands against authority can also be wiped by a simple rewrite of history or rebooting for the future.

Rebooting the present or future was yet another thematic present within this packed season. The “Member-berries” introduced in the first episode are a super-food which while innocent at the start become evil-humanized-nostalgia-fruit hell-bent on ensuring humanity lives in the past and doesn’t move on with any new ideas. Indeed, in the final episode The End of Serialization the “Member-berries” even end up in the White House. While not always convinced by these turn of events I can see the satirical point being made that living in the past remembering: Star Wars, Chewbacca, Tie-Fighters, Luke Skywalker, Indiana Jones, Flash Gordon, Superman, Reagan, the 80s, sugar from your neighbour, feeling safe, Stormtroopers etc. can be culturally dangerous and lead to the excavation of archaic politics hence the rise of Trump and the perceived right-wing Brexit vote.

Yet, nostalgia can also be a positive thing too and paradoxically I do at times hanker after the simpler, yet brilliantly effective South Park episodes which were perhaps more focussed and arguably funnier. But one cannot fault the programme makers for aiming higher than the usual shit you get on television. Plus, the “Member-berries” plot line did rightly put the boot into the ridiculous eulogizing of J.J. Abrams and The Force Awakens which definitely wasn’t as good as people made out. So, in that respect, the show made a very valid cultural point. But while going back can be a negative force it can also help us learn from our mistakes, however, given President-Trump’s about to enter the White House it seems humans just love making the same mistakes over and over again.

While Season 19 became arguably the most coherent, incisive, funny and complex narrative out of all Trey Parker’s and Matt Stone’s previous work, Season 20 had a lot to live up to. However although the riotous narrative strands represented a major strength I don’t feel, overall, this season had as many gags or classic episodes. I would say that it worked best as an accomplished serialized conceptual satire with a few piss and dick jokes as opposed to the fast-paced-gag-filled-stand-alone-episode format of the earlier seasons. Still, while it may not have had many stand-out classic episodes, Season 20 was still a blast of wonderful filthy satire and due to the complex density of the storylines will no doubt improve with further viewings.

As I have attested on this blog many times, South Park is the greatest comedy of all time and shows no sign of losing its comedic and satirical power. The bar was raised SO high by Season 19 that perhaps ambition to beat that was always going to be tough. Still, I still respect Trey Parker and Matt Stone’s multi-skilled “authoritah” in using the inhabitants of South Park to rip into the world, media, politics, culture and religion with hilarious effect.

My favouritest ever episodes up to Season 17 can be found here:

One thought on “THE FRACTURED BUT TROLL! – SOUTH PARK – SEASON 20 REVIEW”