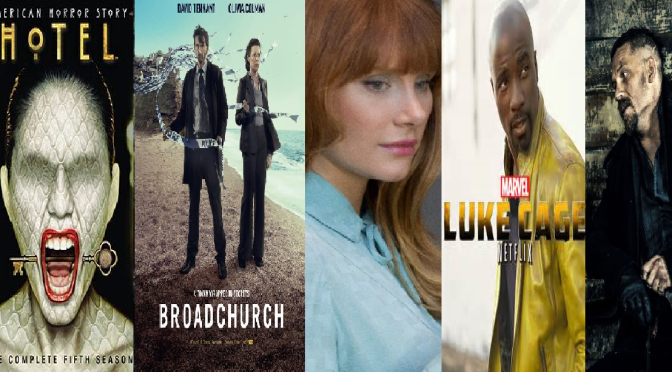 While going to the cinema is one of my favourite things to do the quality of television dramas has risen in quality to almost cinematic levels at times. Plus, there’s nothing quite like a box-set binge too for one’s enjoyment.  Here are a few TV dramas I’ve caught up with over the last few months with marks out of 11.

Minus Jessica Lange alas, this one had Lady Gaga to fill the void as the writers introduced a whole new set of monsters, murderers, rapists, ghouls, vampires, junkies and deviants. Set in a H.H. Holmes-style horror hotel, one can always rely on American Horror Story for over-the-top blood-letting, devilish characters trying to out-do each and pitch black humour throughout. While sickening to watch at times it never takes itself too seriously and is recommended to proper horror fans. On the whole its narrative takes second place to the demonic style; pop video vignettes and decadent shenanigans featuring historical serial killers and fantastical blood-sucking beasts.   (Mark: 8 out of 11)

This is a must-see TV programme for anyone who likes brilliant drama which has intelligent writing and a scorpion twist in the tale of every story. Six stand-alone episodes all provide an insight into the dark recesses of technology and how it can impact humanity.  Social media, videogames, virtual reality, internet bullying, techno cryogenics, military mind experiments and cyber-terrorism are all filtered through Charlie Brooker’s devious imagination. A great ensemble cast of actors are seen within the anthology series including: Bryce Dallas Howard, Mackenzie Davis, Kelly Macdonald, Michael Kelly, Gugu Mbatha-Raw, Jerome Flynn and many more make this one of the best TV programmes of last or any year. If I had to choose the stand out episodes were San Junipero and Shut Up and Dance. (Mark: 10 out of 11)

The 3rd season of this police procedural drama is on ITV now so I thought I’d do a quick catch up of the first two seasons. It begins with the death of a young boy and the subsequent police investigation, plus the impact this has on his family and coastal community of Broadchurch. The first season is first and foremost a terrific “whodunit” as various members of the town are all plausible suspects. Moreover, the brilliant acting duo of Olivia Colman and David Tennant spark off each other throughout the investigation. Writer Chris Chibnall deals expertly with the emotions too as the family – including Jodie Whitaker as the mother of the tragic child – are put through the wringer by the crime. The second season is almost as gripping as the child killer faces trial and Tennant’s character obsessively investigates a historical crime which blotted his police career. Overall, it is an excellent drama with many twists and a superb ensemble cast of British actors. (Mark: 9 out of 11)

Luke Cage’s reluctant superhero had previously popped up in the Marvel series Jessica Jones and the action follows up from there. He’s a humble man trying to keep a low profile but given he is virtually indestructible it’s not long before trouble finds him in the guise of Harlem gangsters Cottonmouth (Mahershala Ali), Diamond Back (Erik LaRay Harvey) and Alfre Woodard’s crooked politician Mariah Dillard. Luke Cage is decent show with a lot of style, soul and terrific musical performances. The script draws attention to many important historical black figures from history, while the direction harks back to 70s’ Blaxploitation films. Mike Colter in the lead lacks a certain charisma but has power and likeability. Overall the story felt padded out over 13 episodes by some unnecessarily long dialogue scenes and while the fights scenes were strong they lacked the wow factor of say the brilliant Daredevil show. (Mark: 7.5 out of 11)

While it’s pretty binary in its tough guys and dolls representations I’m still digging my catch-ups on this neo-Western-hard-assed biker drama.  The main reasons to watch the show are the performances of Charlie Hunnam as the ever-conflicted Jax and Maggie Siff as his “old lady” Tara. Katey Sagal and Ron Perlman are also excellent as the matriarch, Gemma and grizzled patriarch, Clay.  The twisting serpentine plots of Seasons 4 and 5 find, aside from other gangs and the law, new rivals in the way such as: the Mexican Cartel, businessman Damon Pope and SAMCRO themselves splinter into civil war after Clay’s skulduggery upsets the groups’ dynamic. The seasons are full of the usual grim violence, motorcycle pursuits, gunfire, black humour and lashings of naked flesh. It’s soapy at times but full of great dramatic twists making it very watchable television.  (Mark: 8 out of 11)

Pitched somewhere between Fargo and the Rockford Files this violent 1970s set thriller was a brutal watch at times. The story finds a recently returned Vietnam veteran, Mac Conway (Logan Marshall-Green) carrying out hits for a murky businessmen called The Broker (Peter Mullan) in order to clear a debt. As a troubled character, suffering from post-traumatic stress, Conway is a fascinating anti-hero and the thrills come from the hellish danger he finds himself in from episode to episode. Essentially, his whole world turns to shit and the only way out of it is to become a reluctant killer. Like Luke Cage music is featured very prominently, notably dirty blues, jazz, rock and soul; while the style is muddy water noir throughout. Marshall-Green is a dead ringer for Matthew McConaughey but is a fine lead and he, Mullan and gay hitman Damon Herriman make this bloody show most watchable. (Mark: 8 out of 11)

Tom Hardy produced and starred in this flagship BBC period drama which ran over eight dark-hearted episodes recently. I have to say that it was sumptuous and stylish affair which oozed quality and class throughout. Hardy himself, looking very Bill Sykes in his long black coat and battered top hat, portrayed James Delaney, a man on a mission to get back his fathers’ estate and battle the East India Company for crimes against his body and soul. Hardy’s naked muscular body is something you see a lot of amidst the faux mysticism, American spies, gluttonous Royalty, gap-toothed prostitutes, tattooed ragamuffins and Oona Chaplin as Hardy’s cuckolded sister hiding a terrible secret. The supporting cast are absolutely brilliant especially: Tom Hollander, Michael Kelly, Jesse Buckley, Jonathan Pryce, Stephen Graham and Edward Hogg. Overall, it was more style than substance and the revenge plot was dragged out and did not make much sense really. Still, the smoke-and-shadows style plus the brooding Hardy made it worth a watch. The score by Max Richter though was probably the best thing in the whole show; both majestic and black in equal measures. (Mark: 8 out of 11)