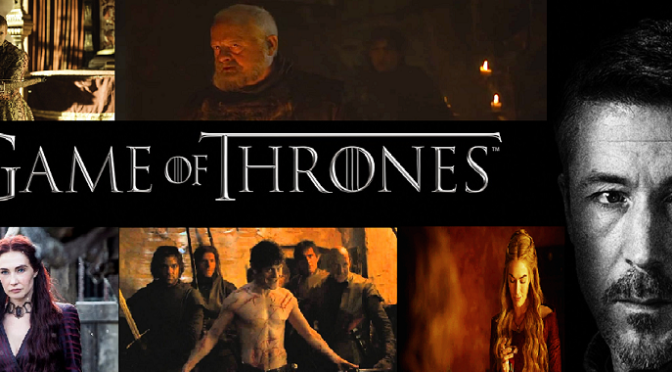 SIX OF THE BEST #8 – GAME OF THRONES’ MOST EVIL VILLAINS

I’ve been enjoying the hell out of re-watching all the seasons of Game of Thrones and once again I take a look at six of the best things from HBO’s adaptation of George R.R. Martin’s amazing literary fantasy epics!  Game of Thrones has its fair share of nasty pieces of work so here, in my opinion, are the worst of the lot!

The quote, “Hell hath no fury like a woman scorned” was never more appropriate where Cersei Lannister is concerned. Brilliantly portrayed by Lena Headey her spite and evil is borne out of a sense of injustice; having been overlooked for leadership due to her gender by her father and the sexist nature of the time. This, I think, is forgivable if she wasn’t so bitter and twisted towards the likes of Tyrion (Peter Dinklage), Sansa Stark (Sophie Turner) and Margaery Tyrell (Nathalie Dormer) and didn’t openly revel in their suffering. Her plots aren’t always successful though because having given power to the ‘Faith Militant’ her plan backfired and she had to do the ‘Walk of Shame’. Having said that her revenge on the High Sparrow and his lot for this was, you have to hand it to her, explosive and devilishly realised.

Craster was Wildling pig of a man who was not only raping his own daughters for pleasure but using the male offspring as White Walker sacrifices in order to maintain his own safety. I understand that in desperate times desperate measures are required but to incestuously rape your own kin and farm them off to the deadly enemy takes the cake. Ultimately, he got his bloody comeuppance at the hands of another violent thug, the double-knifed traitor Karl Tanner (Burn Gorman). Having said that Tanner was just as vicious and having taken Craster’s Keep, he got a sword through the mouth from the heroic Jon Snow (Kit Harrington).

This snivelling-out-of-incest-born-cowardly-prick was a complete arsehole from the first episode. In true pantomime villain style, you could hear the screams of delight across the TV audience when he was poisoned at his own wedding in Season 4. He bullied all those around him that were weaker including the much maligned Sansa Stark and butchered prostitutes without a care in the world. What made this sister-brother-bastard-offspring even more odious is he was a complete coward too. He bottled it at the Battle of Blackwater and when he had the chance to show mercy for Ned Stark, gave the order for his decapitation. What a c—t!

With the voice of a hypnotic snake ‘Littlefinger’ is a very dangerous man indeed. In fact, he’s arguably the most evil of the lot as his plotting is virtually invisible and yet done in plain sight. A true Machiavellian he manipulates everyone using spies, soldiers, servants and prostitutes to do his watching and listening. His crimes are legion and include:  turning on Ned Stark to favour the Lannister’s; helping the Tyrell’s poison Joffrey to turn on the Lannister’s; pushing madwoman Lady Lysa Arryn to her death through the Moon Door to benefit himself; gaining Sansa Stark’s trust before finagling her into marrying the complete bastard Ramsay Bolton; and then turning on the Bolton family by taking the Knights of the Vale to defeat them. In short: he’s a brilliant and fiendish tactician up to the end of Season 6 that is, when he finds further rivals stopping his path to the Iron Throne.

The Red Woman is a constant threat to all characters throughout the seasons of the show. She uses her committed fervour to the Lord of the Light, and her sexual wares,  to suck the life out of the people around her and bring bloody death to others. Essentially a human embodiment of the Succubus creature she gets her claws into Stannis Baratheon (Stephen Dillane) and convinces him the fire has named him the one and true King. Only after Stannis’ daughter is burnt at the stake as a sacrifice and Stannis is killed in the Battle for Winterfell does she admit she may have got it wrong?!? Having previously killed Renley Baratheon with black magic;  leech-raped Gendry (Joe Dempsie) for his blood; done for Stannis; she then turns her attention to Jon Snow. Indeed, even though she had brought him back to life he banishes her for the witch and jinx that she is.

Beginning in some ways like a Northern Joffrey, the bastard Ramsay Snow was introduced as a possible ally to Theon Greyjoy (Alfie Allen), only to sneakily turn the tables and in fact reveal himself to be Theon’s captor. Unlike Joffrey he is cunning, as he proved getting information out of Theon, and actually a fierce fighter and killer. While he genuinely backs up his psychopathy with violent acts his means of killing people is gruesome to say the least. The Bolton’s do not take prisoners and instead skin their foes alive. While Ramsay delights in not only feeding his enemies to the dogs and sexually humiliating poor Sansa, he also cut Theon’s cock off in one of the most sickening acts of violence. In a TV show that is always imaginatively near-the-knuckle when it comes to torture this was utterly sickening. Sansa’s revenge on Ramsay has to be one of the most satisfying moments in the show’s history.