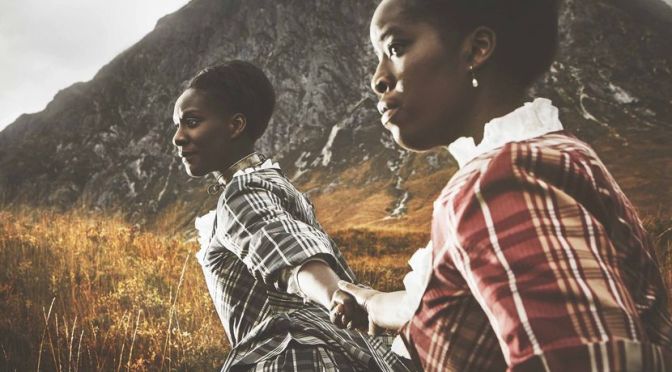 As I’ve written before I’m an avid short film viewer and maker. To tell an impactful story in a lesser period of time to a feature film can be a very difficult but ultimately rewarding experience. Plus, as a member of the audience and filmmaker myself I love seeing the different ways other creatives tell their stories in this medium.

‘Thrill of the Chase’ was curated by the London Film Festival and featured five shorts from Europe and I must say they were of the highest quality. I mean some of the budgets on these must have been very good because they were shot, acted and edited to an exceptionally brilliant standard.The first short, 1745, was a period pursuit drama. Two slaves, wearing big, colourful, tartan, traditional and unwieldy dresses of the Jacobean era, have escaped from a nearby castle and are chased by a steely Scottish Laird, hell bent on recovering his “property”. It’s incredibly well shot as the colour of the costumes countered the misty, green and vast mountainous landscapes up close and from a spectacular god’s-eye view. Overall, it’s a commendable story of two women escaping patriarchal oppression and abuse, set amidst an exquisite looking but harsh Scottish Highlands.

Next up was Oksijan. Set in the harsh contemporary now it also involved a set of characters escaping an oppressive regime. This time is was a group of Asylum seekers, adults and children, encased in the potential moving tomb of an articulated lorry transporting them from a refugee camp. Their deadly journey from Calais to the United Kingdom was made perilous by the air running out. A thrilling and suspenseful short it both raised the pulse and important issues in regard to the plight of human beings fleeing war torn countries.

After Scottish and English film productions we next had Hot and Cold from Poland. This was a very harsh film, thirty-five minutes long, and all shot in one take. Technically, it was incredible as the camera follows a young junkie mother throughout her day and her encounter with woman looking to get revenge on her husband. It’s a towering study of motherhood, grief and addiction which creates a claustrophobic nightmarish drama with the colour-bled bleakness of Polish council estates. I wasn’t sure the one-take was actually necessary as the narrative could’ve been pruned but it was very powerful nonetheless.

The final two films came from France and Germany respectively. Both reminded me of mini-versions of excellent feature films. The French film Les Miserables (not the Victor Hugo version) concerned cops on a dangerous estate and their heavy-handed dealings with gang-members. It’s well filmed and acted, containing the bruising feel of the classic French movie La Haine (1995).

Similarly, the final short was another drama but this time of the romantic kind. Till One Cries concerned two drug-addled millennials sharing a crazy night within an urban German milieu. It reminded me somewhat, without the shot-all-in-one-take business, of the brilliant crime-romance Victoria (2015) and showed the hedonistic highs and lows of two free-wheeling characters.

Overall, the programme was full of gripping drama and thought-provoking subject matter. I’d say the ‘Thrill of the Chase’ title was slightly misleading in my mind, as the films tended toward, not your classic genre thrillers, but rather more social realism and cinema verité than movie artifice. Indeed, it may have benefited throwing in a shorter, punchier thriller with an element of comedy to break up the incredibly heavy themes of the films presented. Nevertheless, this was a set of Premier League short films, in terms of production, performance and storytelling quality.