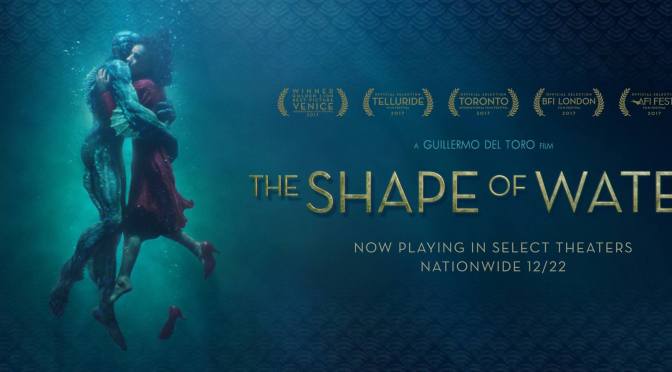 Amidst the incredible visual magic, themes of the outsider, forbidden love and the onerous scope of the patriarchy are replete within the works of fantasist Guillermo Del Toro. They are often more than not presented within allegories too where the fantastic elements are employed to both create spellbinding awe while secretly delivering an important socio-political message. For me, Del Toro in attempting to marry grandiose concepts with important messages must be praised for his risk-taking. Above all else there is no doubt, as his latest film The Shape of Water confirms, he is a filmmaker of some brilliance.

Del Toro’s body of work demonstrates: outsiders, freaks, the silent minority and the shunned are never far away from his vision. In The Devil’s Backbone (2001) and Pans Labyrinth (2006), children find themselves the victims of horrific civil war. While, similarly, in Hellboy (2004) war with the Nazis is central to the core as our anti-hero, a sarcastic red ‘demon’, fights against all manner of monstrous foes. Prejudice against Hellboy is also represented within his “forbidden” love for Liz Sherman (Selma Blair), while an altogether more sinister romance is shown in gothic thriller Crimson Peak (2015). Even muscular vampire-hunter played by Wesley Snipes in Blade II (2002) is a freakish hybrid who does not fit into the societal and patriarchal order.

In The Shape of Water, Del Toro has successfully taken all of these elements and themes and delivered a magical, poetic, at times disturbing, but overall incredible cinematic experience. Set during the Cold War in 1950s Washington, Sally Hawkins plays mute cleaner Elisa Esposito, who along with her friend, Zelda (a wonderful Octavia Spencer), works at a top secret U.S. army base. Silent from birth, what she lacks in voice, Elisa more than makes up for in courage, compassion and confidence. She shares her living space with retired copywriter, Giles — portrayed with incredible warmth and wit by Richard Jenkins — and his army of cats. But when a mysterious “Asset” is delivered to Elisa’s place of work she suddenly becomes entwined in an incredible story of sacrifice and love.

The “Asset” is considered a monster by the United States Army and the security team is led by a dominant bully and alpha male called Strickland. Here, once again, Michael Shannon proves himself a formidable actor. He doesn’t just do cartoon bad guys but, thanks to some great writing and acting, Strickland is shown to be the biggest monster of the film; full of nasty quirks and a sadistic desire for control. Doug Jones as the Amphibian Man also deserves a special mention as the scenes between him and Sally Hawkins are very special. Here two silent characters are able to say more with a look, hand signal and touch than a thousand words could achieve. Del Toro supports the acting with some terrific visuals, many of them water-based, as raindrops, bath water and aquatic underwater images submerge us in a rich palette of blues and greens. The music is cleverly used too; from Alexander Desplat’s melodious score to the old classic songs of yesteryear humming from the cinema below Elsa’s apartment building.

In any other year Sally Hawkins, and she may well still do, walk away with all the Best Actress honours;  yet she is up against the incredible Frances McDormand. Nonetheless, Hawkins gives us such a nuanced and heartrending performance you forget that she cannot speak. But that is what Del Toro does so well because throughout his oeuvre he gives voices to the outsiders, orphans, children, supposed monsters and victims of oppression. This is mainly a love story but I also enjoyed the brilliant writing from Vanessa Taylor and Del Toro as the script leaps from romance to horror, suspense, action, cold-war thriller and black comedy. Overall, within this magical experience Del Toro invites us into a dark world where prejudice is ultimately defeated by tenderness; and brutality will never stop the path of true love.