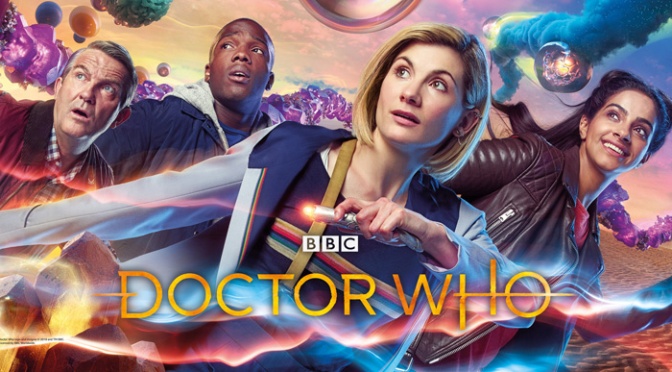 Well, this was a lot of fun. I really connected with this latest adventure, which found the Doctor and her crew initially scavenging on an alien junkyard planet, before suddenly being caught in a surprise sonic explosion. They wake aboard the Tsuranga – which is an automated space hospital – like a flying version of the National Health Service. Discombobulated and injured from the mine explosion the Doctor, companions, Tsuranga’s crew and patients are soon to be faced with an even bigger danger.

Small but devastating the danger is called a P’Ting. It’s a creature that scoffs non-organic material; a cute looking eating machine that will devour the ship. It attacks the vessel and begins literally eating it out of space-ship and home.  The Doctor, aided by the ship’s medical staff Astos and Mabli; plus General Eve Cicero; her brother Durkas; synth robot Ronan; and Yoss, a pregnant man are all threatened by the darned P’Ting. I wondered if there was some sociological subtext to the P’Ting as it eats its way through the hospital in space, with Chris Chibnall critiquing the devastation of the NHS by the Tories. However, this message wasn’t to the fore and overall it was essentially a fun genre episode with lots of action and humour throughout.

The standard genre set-up of a base/ship under siege is a Doctor Who staple. Despite the simplicity of the plot, it felt fast-paced and thrilling to me. The guest stars were excellent too, notably the comedian Brett Goldstein who stood out during his time on screen. There was some silliness with Ben Bailey-Smith’s Durkas rigging up a nebulous engineering control to pilot the crashing Tsuranga; nonetheless the entertainment levels remained very high. I especially enjoyed the humour and emotion gained from the alien bloke (who looked very human) giving birth; while Tosin Cole’s Ryan examined further his own relationship with his estranged father. Overall though, this was another light and uncomplicated episode from Chibnall, Whittaker and the team, but one that had me laughing and thrilled throughout.