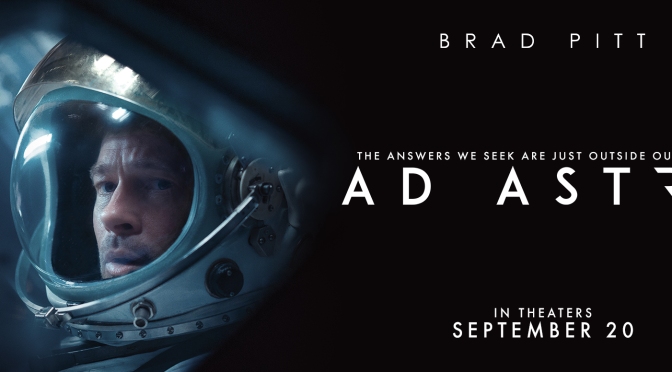 I haven’t done one of these for a while so thought I’d reignite my movie preview section. The main reason is the trailer for science-fiction epic, Ad Astra (2019) looked absolutely brilliant, so I’m very excited to see it at the cinema when released. Here are five reasons it could be good.

I love the science fiction genre and space especially is a great place to create mystery and drama. The narrative to Ad Astra (2019) finds Roy McBride (Brad Pitt) travelling to the depths of the galaxy to find his missing father (Tommy Lee Jones). While it appears to be an original script, the story owes much to Joseph Conrad’s Heart of Darkness. Thus, if we get anywhere near as incredible as Apocalypse Now (1979), but set in space, this could be really great.

Director James Gray has steadily built up a very impressive film C.V. of character and crime dramas. His last film, The Lost City of Z (2016). a jungle epic was a box office loser, but a really compelling drama about exploration and obsession in the Victorian era. Ad Astra (2019) is his biggest budgeted film so far, but given his filmmaking skills and experience, it could be his best yet.

Flying high from starring in Tarantino’s twisted movie fairytale, Once Upon A Time In Hollywood (2019), Brad Pitt is proving his star quality still burns brightly. Pitt is always a commanding lead actor and he has played: Nazi Hunters, bare-knuckled fighters, disaffected thirty-something alter-egos, baseball coaches, infamous cowboys, romantic heroes, stoners, vampires, cops, psychopathic drifters, hit-men and many more characters. Here he plays an astronaut and I think it is only his second sci-fi film after the superb Twelve Monkeys (1995). Thus, Brad Pitt’s appearance is another reason to get excited.

While I’m a screenwriter myself and more drawn to story rather than effects driven films, The Moving Picture Company are leading special effects experts. They have worked with Method Studios, Mr X, Weta, Brainstorm Digital etc. on this film and so the work on this space opera looks like it could be incredible. Indeed, The Moving Picture Company alone have provided effects for: Blade Runner 2049 (2018), The Jungle Book (2017), Sully (2017), The Martian (2016), The Guardians of the Galaxy (2015) and many more!

Because I am so experienced and probably jaded where trailers are concerned, it takes a lot to get my attention when at the cinema. But, the trailer for Ad Astra (2019) absolutely rocked. It did not give ALL the story away and made me want to watch the film. Don’t take my word for it – here it is: