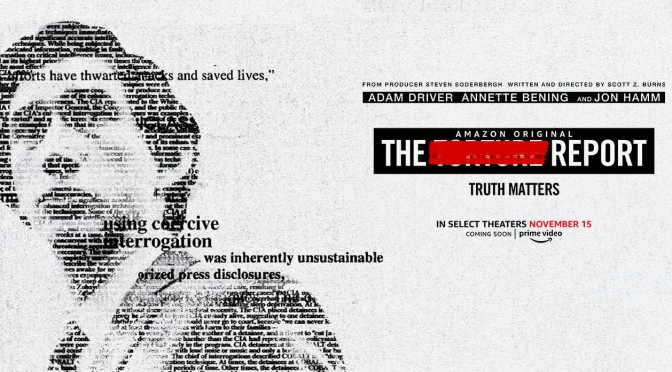 The Report (2019) is in the vein of recent films such as, Kill The Messenger (2014), The Post (2017), and Oscar winner, Spotlight (2015). It is based on true events and forensically documents a period of U.S. history which is both illuminating and engrossing. Adam Driver is cast as U.S. Senate staffer, Daniel J. Jones and given the task by Senator Feinstein (Annette Bening) to lead a team to investigate the 2005 destruction of interrogation videotapes. He begins the work in 2009 and is faced with six million pages of CIA materials to work through. It soon, unsurprisingly, becomes an obsessive and ordered job for Jones and it takes him years to ultimately finish the report.

I won’t give anymore away about the narrative events, but first and foremost this is a film about torture and admin. Writer and director, Scott Z. Burns cleverly structures the story between Jones’ researching the CIA materials and the actions of the Counter-Terrorist Centre staff led by the likes of Maura Tierney and George Fumusa’s characters. As the story proceeds, and details of extreme torture of terrorist subjects is revealed, Burns takes us further up the CIA food chain. Here we get a very damning critique of the horrifying lengths CIA operatives went to in order to secure information from suspects.

The Report (2019) is an engrossing film which I thought was going to go down the conspiracy thriller route or even the obsessive character breakdown study. There are elements of this, but essentially it is an extensively researched drama set in enclosed offices, in meetings, in Senate hearings, at desks and computer screens; all with flashes of interspersing violence. I’m not acutely educated in regard to American foreign policy and politics in general, but a potentially dry subject is made so engrossing by a fine script and brilliant cast. Adam Driver essentially goes to Washington, proving once again that he is one of the best actors around at the moment. Above all else though, the film stands as an impressive visual document and precis of the original seven thousand-page report by Daniel J. Jones.