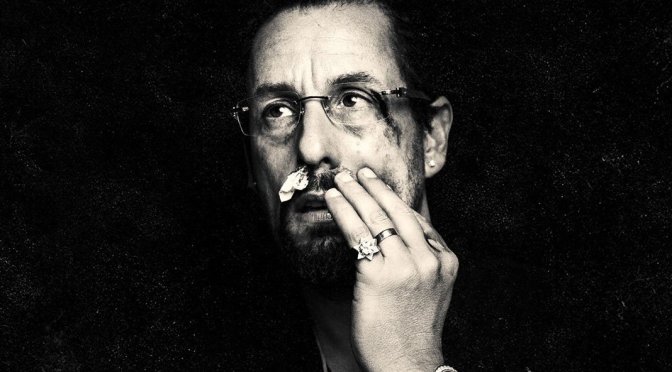 This is a film about an arsehole. Aptly enough we are introduced to the main protagonist, Howard Ratner (Adam Sandler), as he has a rectal examination of his colon and other extremities. From here on we descend into the mired cesspool that is Howard’s dysfunctional business, family, love and extra-curricular activities. He is, on the surface, a successful businessman selling jewellery, watches and gems within New York’s Diamond district. Alas, he is also a degenerate gambler who is being chased by all manner of shark-like money lenders. Most hungry of all is Eric Bogosian’s Arno, who also happens to be Howard’s brother-in-law.

So, we find ourselves in the company of a thoroughly unedifying character such as Howard. Yet, in Adam Sandler’s brilliant performance and searing direction by the Safdie Brothers, you get caught up in his latest cynical money-making plan to sell an uncut opal rock from Ethiopia at auction. The rock itself becomes — reminiscent of Guy Ritchie’s Snatch (2000) — a metaphorically blood-stained McGuffin that drags us into the underbelly of New York’s sports, pawnbroker, bookmaker, entertainment and loan shark territories. Aside from Howard’s wife and children everyone is looking for luck and a buck. Everyone’s a hustler. Everyone talks and shouts and swears over each other, creating a sense of panic throughout many scenes of deal-making and deal-breaking.

Opening with two visually very different internal examinations that involve “mining”, the Safdie brothers film Uncut Gems (2019), is a stylish and rampant anxiety inducing character study and thriller. The plot, which in itself, is quite straightforward, is wrapped in a series of heart-sweating gambles, twists and double-crosses. Supporting Sandler’s fine central performance, the Safdie Brothers find acting gold with Lakeith Stanfield’s memorable supporting turn, plus basketball legend, Kevin Garnett brilliantly playing himself! Allied to this, you also get a rogue’s gallery of personalities straight out of the local New York jewellery area itself. These characters add a further dirty authenticity to the already chaotic urban environment.

Like the Safdie Brothers previous film, the ironically titled, Good Time (2017), we are once again introduced to a set of morally repugnant characters who, rather than root for, you are dragged down into their disturbing lifestyle choices and increasingly poor decisions. Howard himself is an unrelenting addict, his own worst enemy and a whirlwind of broken promises. But, I must admit I was gripped throughout due to overwhelmingly brilliant style, cinematography, editing, direction, darkly funny script and acting performances. My only criticism is that for all the black humour, bone-breaking violence and heart-sweating suspense, the film could have easily been 15 minutes shorter. I like a lot of plot and action, but at times the narrative was over-loaded with characters and scenes that could have been chopped. Lastly, it’s great to witness Adam Sandler taking another risky role, even if Howard Ratner is fundamentally an arsehole from the probing start to the very bitter end.