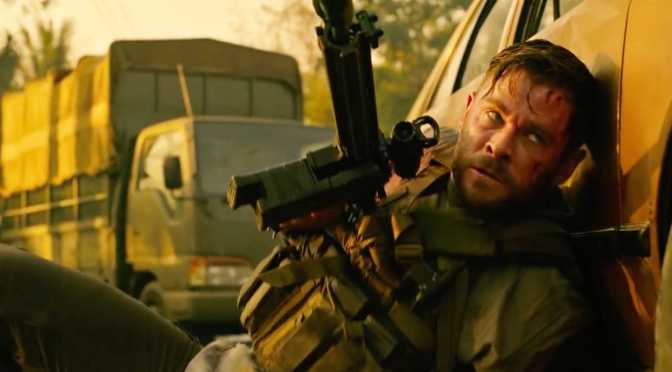 Do you remember when action heroes used to be larger than life, filling up the screens with muscles, charisma, and wise-cracking one-liners. I am old, so I certainly do. The likes of Arnold Schwarzenegger, Steven Seagal, Bruce Willis, Jean Claude Van Damme and of course, Sylvester Stallone were just some of the leading men crunching and blowing up the cinema screens. Okay, they may have been reactionary 1980s and 1990s masculine archetypes, and arguably nationalistic, sexist, militarist and incredibly over-the-top characters, but I kind of miss them. Because today’s action heroes, while equally talented at killing and delivering mayhem, are somewhat less colourful.

Don’t get me wrong, I still enjoy the technically excellent and brutally realised fight scenes and stunts of today. However, John Wick, Bryan Mills of Taken (2008), Lorraine Broughton of Atomic Blonde (2017), Jason Bourne, and now Chris Hemsworth’s mercenary, Tyler Rake in Extraction (2020), are individuals of fewer words and even less humour. I guess Jason Statham isn’t too bad, but he’s still quite serious. Lastly, while one can certainly rely on the sanitized fun of the Marvel Universe for some humour and personality within the action, it’s still not the same as a good old Arnie action flick. The more adult oriented superhero, Deadpool (2016), can be relied on for X-rated violence and constant verbal quips. But, he wears a suit and it’s just not as good as the action heroes I grew up watching. Ah, but that’s nostalgia for you.

Why the trip down memory lane, Paul? What about the kinetic and explosive action of Extraction (2020)? Yes, the well-choreographed manoeuvres are extremely exciting. They are also bone-crushingly relentless from the moment Tyler Rake enters Bangladesh to extract an imprisoned Indian gangster’s teenage son, Ovi Mahajan (Rudhraksh Jaiswal). Hemsworth and director Sam Hargrave get you in and out of hand-to-hand fights, car chases, leaps and falls from buildings, and constant gun battles with stunning brilliance throughout. The camera and editing work present virtuoso work, capped by an almost seamless eleven minute long take involving all manner of mayhem. While Ovi and Tyler kind of bond later in the film, I found myself needing more emotional or political subtext to narrative. Even John Wick (2014) created its own mythology and universe, where this relies on fast-paced movement, military tropes and lazy stereotypes. Ultimately, Extraction (2020) was like an explosive fireworks display. Great to watch while it lasted, but ultimately forgettable. Man on Fire (2004) did this story way better and with way more feeling. 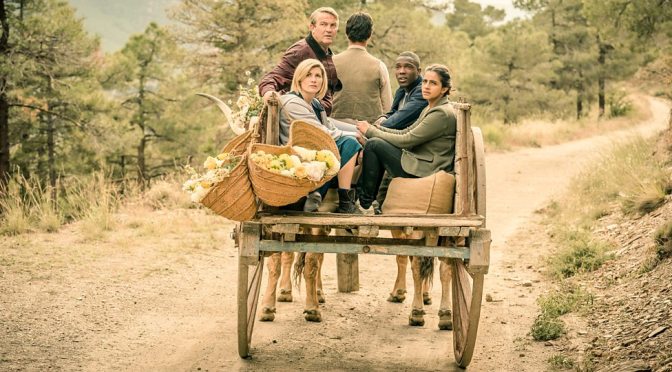 This season of Doctor Who is now settling into a strong mix of diversity, narrative simplicity and emotional resonance. I’ve read some negative comments bemoaning the quality of the writing and weakness of the stories in general, however, as Sunday night teatime entertainment goes the show is a success in my view. Indeed, the latest episode, Demons of the Punjab was another involving and fascinating watch.

This week it was Yaz’ character which took centre stage as her curiosity about her grandmother, Umbreen, found the Doctor breaking time-travel protocol. If you’ve seen the Doctor Who episode Father’s Day and film classic Back to the Future (1985) we all know how dangerous it can be for anyone to cross their own timeline. Indeed, while the Doctor has actually crossed her own timeline before many times she should really know better!

Thus, Team TARDIS travelled back to 1947 as the Partition of India took place. Here Yaz gets to meet her own family members as her grandmother is about to marry. Of course the path of true love and time travel rarely goes smoothly and the course of history is threatened by Yaz’ presence and her and the Doctor must attempt to not interfere with events. Of course, it would not be a Doctor Who episode without some kind of alien threat and this is provided by the Vajarians; a mystical race who appear where chaos is ensuing across the universe. Their presence adds an air of mystery to the episode, but ultimately they are an emotional subplot to the main conflict relating to how the Partition of India affects Yaz’ family.

Overall, Demons of the Punjab successfully combined political, historical, romance and drama in amidst the usual science fiction concepts. It was especially strong from an emotional perspective. By the end as a family is torn apart by the situation I felt a real sadness in my heart. The division of India by the British Empire was an event which divided people based on their religion and ethnic background and created a huge schism between families, colleagues and friends. Doctor Who merely skims the surface of the impact it would have and the lives affected by the subsequent conflict. Yet, what the episode teaches us is that while we may not be able to change history we must learn from it. We must learn that division and conflict can only lead to heartache and pain.