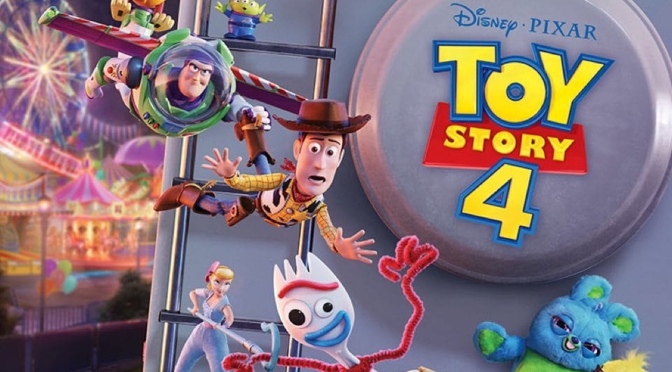 I almost don’t feel qualified any more to review a sequel that was neither expected or necessary. After all, it’s a sequel to a film trilogy which was almost perfect in its’ delivery and execution. But, having paid big bucks for Pixar in 2006, I doubt Toy Story 4 will be the last unnecessary sequel of their products. After all, Disney are in show BUSINESS!!

I also don’t feel qualified as I am so cynical and jaded that the characters of Toy Story do not interest me anymore. In my mind their story is done. Plus, it’s really for kids, isn’t it? However, that isn’t to say that Pixar/Disney have not, once again, created an incredible technical tapestry of some genius. The colour, texture and attention to detail on show are incredible as usual. Similarly, the ultra-talented voice acting of Tom Hanks, Tim Allen, Wallace Shawn, John Ratzenberger, Annie Potts etc. are joined by the brilliant Key and Peele, Christina Hendricks and Tony Hales for the latest release.

Hales offers the voice of potentially one of the worst characters Pixar have ever created: Forky. In fact I think they set out to invent one of the worst characters as a challenge to see if they could make it work. You know what? I think they did make it work. Forky is something the toys’ owner, Bonnie, creates on her first day of kindergarten and with the magic of make-believe he becomes, unknown to her, sentient. We then get the experience of watching a fictitious plastic spork suffering an existential crisis and attempting suicide-by-trash. That’s when good old Woody then tries to teach him his worth.

The sheer goofiness of all this strange plotting works for and against the film. It’s so surreal I thought David Lynch had a hand in the story. Having said that the writer and story credits almost number a football team, so the Frankensteinesque patchwork nature of the screenplay is unsurprisingly. The stitching that holds it all together is Woody’s character. Many of the other toys, including Buzz, are almost sidelined for Woody’s hysterical attempts to control everything around him.

There were a myriad of plots strangling the narrative of Toy Story 4, but the character of Gabby Gabby, voiced by Christina Hendricks, was arguably the most interesting. Echoing the villainy and bitterness of Lotso from the previous sequel, her ventriloquist dummy hench-toys were very creepy and her character added a dark heart amidst the kaleidoscope of wondrous colours. I could take or leave Bo Peep’s, Bonnie’s and Forky’s escapades, but Woody’s encounter with Gabby Gabby was my favourite. Oh, not to forget, Keanu Reeves hilarious little cameo as stunt-toy, Duke Caboom.

Overall, Pixar and Disney do this kind of film amazingly well. Once again one marvels at the technical quality of the animation on show. The story, themes and characters, however, felt a bit recycled and if they do more of these films I think they probably need to jump the shark and allow the toys to finally be seen and heard. How many times can the same joke work? I’m not sure. What is certain though, as long as it makes money Disney will have no issues selling it to the kids. I’m just so old and jaded I’m ready for the attic with all the other discarded and tired toys.