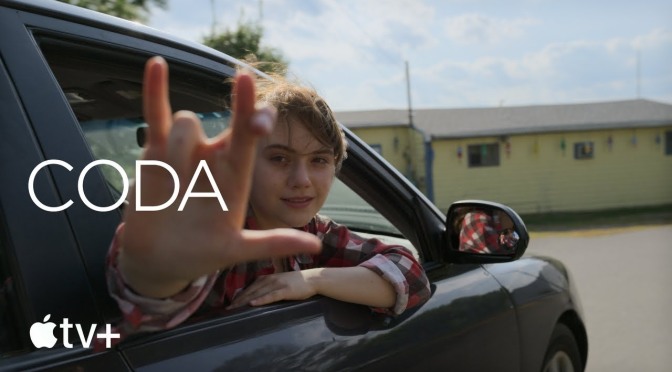 Simultaneously a feelgood film and tear-jerking emotional rollercoaster, CODA (2021) combines many familiar aspects from cinema including: Children of a Lesser God (1986), Billy Elliot (2000), Dirty Dancing (1987), and the more recent and arguably superior drama, Sound of Metal (2019). In fact, while it may seem progressive representing a family of deaf adults, the Rossi’s, and their hearing daughter, Ruby (Emilia Jones), the film feels like a Save-the-Cat-screenplay-template-box-ticker hitting wholly familiar beats and a well-trodden genre path. Coda (2021) is also a remake of a successful French-Belgian film, La Famille Bélier (2014). Having said all that, I loved Coda (2021). It is a terrifically entertaining, moving, funny and heart-warming story which, unsurprisingly won the Academy Award for best film.

Set in Massachusetts amidst the milieu of a working class deaf family, the Rossi’s, who run a struggling fishing boat and have to overcome the ignorance and prejudices of the hearing folk. Hitting the high notes at the heart of the story is Ruby Rossi (Emilia Jones). She is a brilliant character to root for; so human, enthusiastic and authentic. Ruby wants to sing but her family, father Frank (Troy Kotsur), mother Jackie (Marlee Martin), rely heavily on her to assist with business and family matters. Her proud brother Leo (Daniel Durant) desires the chance to take more responsibility and this makes him envious of the attention Ruby gets. Throughout, Coda (2021) spans many genres bringing family conflict, Ruby’s singing dream, young romance, everyday tribulations of a deaf family, as well as the plight of a fishing community into the mix. The fantastic screenplay balances all these elements superbly well.

Ruby’s emotional rites-of-passage arc anchors us through so many memorable scenes, proving pivotal as she ultimately finds her voice and independence. Emilia Jones gives a mature performance full of range and heart. Ruby’s embarrassment, shame, fear, anger, passion, guilt, humour, happiness and guts are all exposed on her journey as she fights against the tide of her own self doubt and commitment to family. Her family are well characterised too with Frank and Jackie providing humour, sympathy and pride as the parents who just don’t want Ruby to leave them. Troy Kostur deservedly won a best actor in a supporting role Oscar. Lastly, famous Mexican actor, Eugenio Derbez as Bernardo Villalobos, gives us a fresh take on the staple role of musical mentor.

Unashamedly melodramatic and occasionally cloying, Coda (2021), is a big-hearted familial comedy-drama which while predictable, contains many powerful messages. Following your dream, respecting those around you and loving your family are important missives especially in a world where political and military leaders remain hell-bent on war. Further, while I am not well versed in the world of the deaf community I felt that the representations here were sensitively managed and well-rounded. Sian Heder, as both writer and director, has adapted this story with care, humour and song. Ruby’s voice soars from her lungs, mouth and hands via the expressive sign language, culminating in a joyous experience that must be seen, heard and most importantly felt.