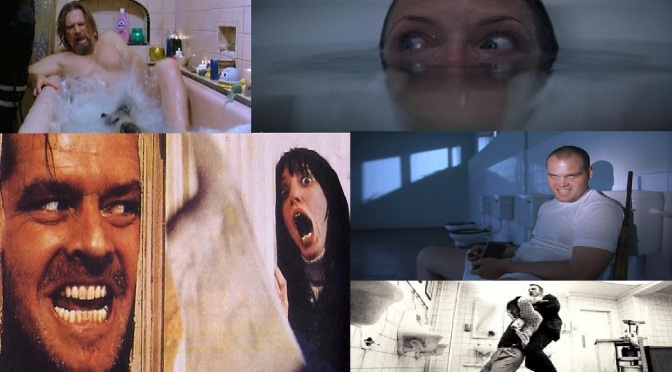 “YOU’RE HAVING A BATH” – SOME GREAT MOVIE BATHROOM SCENES

I’m unsure why but I thought it may be fun to look at some classic movie bathroom scenes.  Perhaps to take my mind off the horrible conflict in Syria which has escalated now?  Perhaps just to remind us how great some of the films on this list are?  Anyway, the bathroom is a place where we spend the beginning/middle/end of our day cleansing ourselves or relaxing or having some ME time. It also happens to be a good place hide, fight, murder and haunt people in culminating in some classic scenes of horror, comedy and drama.

(NOTE TO PEDANTS: most of these scenes are exclusive to the actual bathroom but there could be slight toilet crossover!)

DO NOT WATCH THIS CLIP IF YOU HAVEN’T SEEN THE FILM!!   IT GIVES AWAY THE WHOLE END!!

A massive influence on Psycho (1960) this story of murder and betrayal at a boarding school in France is a brilliant and devious thriller. It also has one of the scariest ending of all time!

“Here’s Johnny!”   Bathrooms and toilets represent danger throughout when Jack encounters a naked nefarious women and the creepy butler earlier in the story. But, after a slow-burning descent into madness Jack Torrance finally cracks with Nicholson on fine maniacal form in this iconic scene from the Kubrik classic!

Tony Montana’s rise from “political refugee” to peaky cocaine King is not without its violent troughs. One such scene occurs when he witnesses a colleague ripped apart by a chainsaw. I feel sorry for the cleaner of the apartment block after this wicked sequence.

You’ve had a hard week and you need to soak your bones and a dead serial killer invades your bath-time dreams. You don’t need that do you!  Great nod to Jaws (1975) too in this horrific scene.

The disintegration of Private Pyle (Vincent D’Onofrio) at the hands of Sgt. Hartman is a grim series featuring physical and mental torture. The episodes are painful and microcosmic in relation to what military life can do to a human being. This tragic latrine scene is memorable and unexpectedly brutal as it culminates in bloody death.

The film that gave us the phrase “bunny boiler” is a taut, scary thriller of the sex, lies and obsession variety.  The fantastic scare-ending though is the one that really sticks in the memory as Glenn Close goes mental following harsh rejection by Michael Douglas’ have-your-cake-and-eat-it-cheat.

The Coen Brothers classic stoner detective film has many, many classic scenes but I defy any writer to come up with a comedic concept funnier than a character being threatened in a bath by nihilists with a ferret!  Pure comedy gold!

Zemeckis made this film in between shooting of Castaway (2000) while Tom Hanks lost loads of weight and it’s a really decent suspense thriller.  Getting drugged by your husband and unable to move is not the kind of date night you imagine will happen. Indeed, never has the creeping fill of a bath been so terrifying!

At first watch I thought this scene was a bit of a narrative cheat. However, with a shotgun at Ethan Hawke’s head the suspense is palpable and how he escapes is fitting. Because, this clever and ruthless urban Western is about karma and retribution; with Hoyt’s earlier noble actions saving him from certain death.

Before he set about ruining the Superman franchise Zach Snyder made some decent facsimiles of other artists work such as 300 (2006) and this souped-up George Romero remake.  The early scenes are the most dramatic because the bloodthirsty zombies are out the traps like Usain Bolt, as Sarah Polley finds when she’s trapped in her bathroom.

This sequence rebooted Bond for the Millennium perfectly as he takes down a hardy spy in the bathroom while confirming his “00” status in the process. It’s a brutal, clinical and a perfect prologue for a great Bond film. The scene is touchingly counterpointed when Bond calms Vesper Lynd down in the shower in an altogether less violent scene later on.