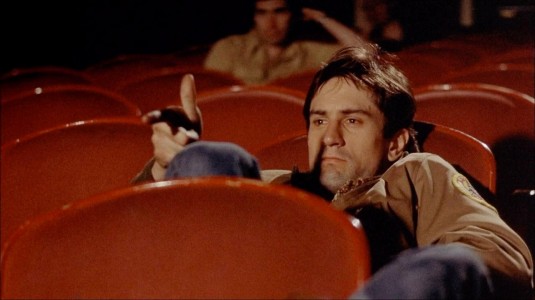 “If you don’t know Robert DeNiro – he used to be an actor.” Doug Stanhope

In a recent stand-up special Beer Hall Putsch drunken, irreverent funny man Doug Stanhope does an extended routine about Jake La Motta. During the hilarious piece he refers to Raging Bull and more specifically Robert DeNiro. As the above quote suggests DeNiro’s career in the last few years has been more akin to that of a jobbing journeyman with the occasional flash of former genius thrown in.

With forgettable roles in Grudge Match (2013), Killer Elite (2011), Showtime (2002) and many more, his C.V. reads like something Steven Seagal would be hard-pushed to be proud of. He has, it seems recently, aside from a few David O. Russell films, been picking acting roles based on scheduling and a pay-cheque rather than their artistic merits. But hey who am I to worry about a man making a few quid; we all have to pay the rent!

Yet, from a craft perspective it is worth remembering DeNiro appeared in films by some of the great directors such as: Scorcese, Bertolucci, DePalma, Mann, Tarantino and Coppola. At one stage he was the greatest ever living actor and here are SIX roles to remind us of that. It was a tough choice but these are my FAVOURITE performances of, perhaps THE finest actor of a generation.

Harvey Keitel is the lead character, Charlie, in this classic-early-Scorcese-urban-street-epic, but DeNiro steals every scene as the ducker-and-diver Johnny Boy. It’s a funny and violent performance containing that trademark grin, verbal dexterity and cool intensity which would become hallmarks of the young Italian’s subsequent performances. His Johnny Boy is flighty and unreliable compared to Keitel’s solid gangster-wannabe and their scenes together are a particular joy as Johnny Boy drives Charlie mad with his irresponsible nature.

Isolation and slow psychosis have never been so compelling in DeNiro’s portrayal of lonely anti-hero Travis Bickle. Schrader, Scorcese and DeNiro were young, edgy artists who delivered a character study which found Vietnam veteran, Bickle, trying to stay sane on the bleak, venal streets of New York. DeNiro bleeds desperation and desire for love and hope. Bickle so desperately tries to fit in with society and do right by people but he’s just too wired to achieve this socially. However, via mania and violence he finds redemption and the acknowledgement of the humanity he so desperately craves.

In terms of marrying both a physical and psychologically formidable performance then THIS is probably DeNiro’s finest role. Obviously he’s famous for putting on a shedload of weight for prize-fighting role of Jake La Motta, however, it’s not a gimmick to sell a film. No, the weight gain is part of the character’s arc as he moves from prime physical masculinity and deteriorates to a fat, useless mess of a man who has pushed all his loved ones away due to mounting paranoia and self-loathing. DeNiro designs a character who hates himself and others and whose ability to suck up punishment and pain is a boon to his boxing ability but detrimental to his sanity. In this performance DeNiro proves there is most certainly method in the madness; a stunning film for which the Italian deservedly won a Best Actor Oscar!

In this stunning, dark comedy of embarrassment DeNiro is the deluded stand-up comedian who is SO desperate to get a break he kidnaps a leading chat show host portrayed by the wonderfully jaded Jerry Lewis. DeNiro is brilliant at all forms of madness whether it be: psychos, paranoiacs or the obsessively maladjusted such as hapless Pupkin. I can identify with the character though as he is just so desperate to gain fame his persistence, if not his methods, are actually something to be admired. Not known for his comic roles generally, DeNiro is fantastically funny with his skippy walk, bad dress sense, ticks, delivery and imaginary conversations with the celebrities he so badly longs to work aside. You know what too: his stand-up comedy isn’t actually that bad either. Overall, stalking and obsession have never been so funny or painful.

What! No Godfather II! No Deerhunter (1978)! No Heat (1995)! And no Casino (1995). Not trying to be contrary but I love this film. It is a rollicking road movie and concerns ulcerated bail-bondsmen, Jack Walsh (DeNiro), who must take a fastidious accountant (Grodin) on a “midnight run” to ensure he testifies against a violent gang boss (Dennis Farina). Obviously, as this is a buddy movie the two “opposite” characters bicker and fight over the course of the story but eventually settle their differences and find a common bond. The pace never lets up as the two “rivals” use every form of transport possible to get across country and it was great to see DeNiro in a less serious role cutting loose with a witty and zinging script.  DeNiro brings a world weary pain and cynical humour to a great genre character film.

As far back as I can remember this has always been my favourite gangster film. Scorcese, Pileggi, Pesci, Liotta and DeNiro were all on fire here in this epic ensemble character story focussing on the rags-to-riches-to-rags-again-narrative of mobster Henry Hill. Yes, Liotta is the lead and Pesci won the Oscar but DeNiro steals pretty much all his scenes as Jimmy “The Gent” Conway. His characterisation is of a charming man who is in fact a bloodthirsty yet charismatic career criminal. DeNiro’s arc shows a man graduating from lorry-jacks to masterminding one of the biggest robberies ever in American history before descending into paranoia and an aging gangster always looking over his shoulder.

DeNiro would give other commanding or at least interesting performances later in his career, for example: Cape Fear (1991), Casino (1995), Heat (1995), Everybody’s Fine (2009), Jackie Brown (1997) and Silver Linings Playbook (2012) but his CV since Goodfellas is, if I’m honest, very patchy. So let us not forget that he has provided some of the most memorable celluloid performances ever. Yes! I’m talking to you!