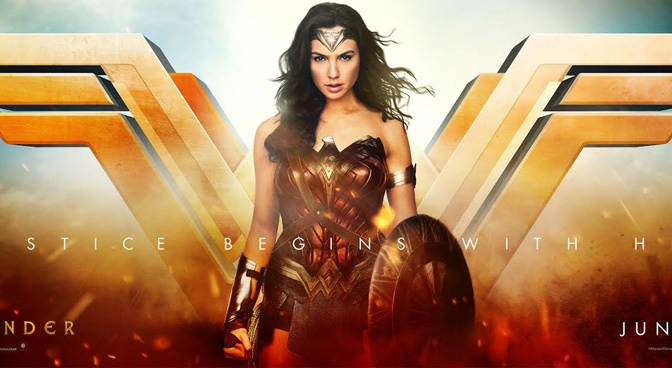 The need for super women and men to rise and protect us against the foes of everyday existence has never been more requisite. Governments, politicians, military commanders, corporate greed, religious leaders and humanity’s capacity for evil and destructive behaviour means people are under threat from violence and death on a daily basis. It’s the world we live in and one we have always lived in. Life is a gift which we continue to throw away because of a difference in beliefs, thoughts, race, gender and language. It is insane but I doubt it will ever stop. So, one must except it and be grateful for all the good people and for every day one is alive. But how do you escape from this terror that lurks in the world and the fear that comes with it? Well, we have the fantasies on film and TV screens and in comic books that convince us we can be saved; that the bad people in league with the devil can be put to the sword of justice. This month we have the Amazonian powerhouse that is Wonder Woman!!

The DC comic-book-cinema-world has taken a critical pasting and much of this can be put at the door of the attention-deficit-director Zach Snyder and of course the studios themselves who have, in my humble opinion, ignored the basics of storytelling and genre in a bombastic attempt to out-do Marvel’s slick and productive Universe. Indeed, there were great films somewhere in the over-stuffed crusts of Man of Steel (2013), Suicide Squad (2016) and the incomprehensible Batman v. Superman (2016); brilliant characters, actors, special effects, action, set-pieces, music in all of them. However, they were ultimately let down by the structure and storytelling. Not so with Wonder Woman, which goes back to basics and takes its time to establish our heroine’s origins and, unlike the other DC films, builds character and empathy prior to launching into a feast of amped-up-to-eleven fight sequences and wondrous leaps of derring-do.

At the centre of all the action is the athletic Gal Gadot as Diana, Princess of Themyscira, who as a girl, desires to join her Aunt Antiope (scene-stealing Robin Wright) as a great warrior, but is forbidden by her mother Queen Hippolyta (Connie Nielsen.) The first act is full of powerful mythology, imagery and characters and to be honest I could have watched a film about their lives on the beautiful secret island. Yet when their peace is unsettled by the appearance of Chris Pine’s American spy and the German Navy pursuing him we get an almighty beach battle between the modern-day Teutonic troops and the Amazonian warriors. This sets the tone of the mythological past juxtaposing with the modern era (albeit circa 1914-1918) and this theme remains one of the strengths of the film.

With the introduction of the charismatic and handsome Steve Trevor (Pine), Diana is galvanized to fight for the Allies in World War One, and thus truly begins the heroine’s journey. The pace and turns in the narrative are handled extremely well by director Patty Jenkins. She gives as much importance to the scenes between Diana and Steve, notably the witty exchanges on the boat and during Diana’s first encounter with the big city. This ensures we are committed to their relationship and the romance had echoes of Indiana Jones and Marian Ravenwood’s from Raiders of the Lost Ark (1981). Conversely, everyone’s favourite baddies, the Germans, provide a solid nemesis which to root against as Danny Huston’s General and his more interesting assistant, Doctor Maru (Elena Anaya), develop a heinous gas with which to defeat the Allies.

I think I liked the film so much mainly because it was simple in structure, well directed, and yet retained much of the magical fantasy and mythology of the comic books. Moreover, it contained some kick-ass slow-motion action sequences and the sight of a warrior Princess using a mighty sword and golden rope while taking out Germans and huge tanks was nothing less than breath-taking. The cast, especially Gadot and Pine commit wonderfully to their characters and the story. Minor criticisms are the slightly over-long running time and the cardboard cut-out nature of the secondary German characters. Nonetheless, as superhero films go Wonder Woman is right up there with some of Marvel’s best movies.

Essentially a traditional origins story, Wonder Woman may follow the well-worn formula of establishing our heroine, her strengths and her commitment to peace through powerful means, but it does it with verve, heart and compassion. I cared about these characters and while it may be a simple notion that love can conquer all, it is a universal emotion that I can definitely get behind. Because there is a lot of hatred on Earth and it needs all the heroes and heroines it can find; even if they are merely fantasy.