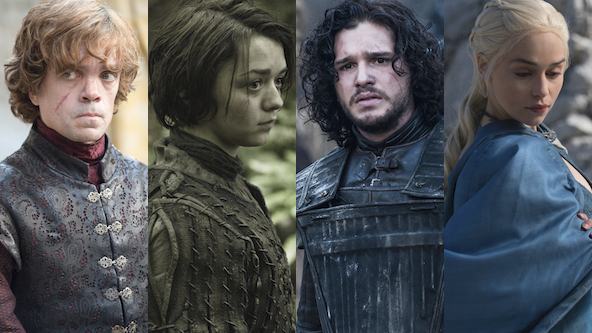 SIX OF THE BEST #10 – GAME OF THRONES FINEST HEROES!

According to Christopher Booker’s text The Seven Basic Plots: Why We Tell Stories, there are in essence only a limited number of narratives including the: ‘Overcoming the Monster’, ‘Rags to Riches’, ‘The Quest’, ‘Comedy, ‘Rebirth’, ‘Tragedy’ and ‘Voyage and Return’. Booker echoes too the studies of mythologist Joseph Campbell who argues that the ‘Hero’s Journey’ or monomyth is the common template of most stories.

Christopher Vogler followed on from Campbell’s extensive work in his book, The Writer’s Journey: Mythic Structure for Writer arguing that most popular stories can be narrowed down to a series of basic structures and archetypes. Indeed, while watching Game of Thrones you can certainly identify many of them notably the Heroes Journey!

So, to continue my exploration of the first six seasons of one of the greatest shows ever, I look at some of the more heroic characters in HBO’s TV masterwork.

A young tomboy at the start of the show Arya’s transformation from fresh-faced waif into a face-shifting-sword-fighting-deadly-assassin has been nothing short of extraordinary. What strikes me as most heroic is Arya’s propensity for bouncing back and that mental toughness has seen her overcome going blind, being enslaved, kidnapped, beaten and left for dead and STILL managing to get revenge on her enemies.

I don’t think there is a nobler character than Brienne of Tarth. She is an honest and loyal Knight of the highest order and an incredibly tough swordsperson too. I was surprised more than anything when she defeated the Hound in combat. Furthermore, her unrequited romance with Jamie was very touching. She is probably the hero with the biggest heart and I hope she gets a good ending in the show.

Daenerys is arguably not as sympathetic a hero as many of the others on the list. Perhaps, her demand and pursuit for the Iron Throne could be seen as power hungry; and in recent seasons her desire for fire and blood have shown a more dangerous side to her. However, her journey has been from a naïve, sold-off bride to a storming Queen; one that has not only commandeered the Dothraki and Unsullied but also defeated the venal Slave-Masters.

Probably the most heroic character of them all as he had outsider beginnings as an illegitimate bastard before growing in stature and experience to become the King of the North. Having made vows to the Nightwatch his desire to form an alliance with the Wildlings became his undoing and only the Lord of Light prevented him passing into the next world. A handsome, rugged and fine fighting specimen, Jon Snow leads by example inspiring those around him to greater things.

Samwell is what I would class as a quiet hero. Ridiculed for his larger size on first meeting he slowly, through intelligence and diplomacy, came to be respected by the Nightwatch; notably Jon Snow. However, it is his protection of Gilly which has seen his heroic stock rise. Having rescued her from the evil Crastor; adopted Gilly’s son as his own; fought off a White Walker; he even stood up to his bullying father, proving Sam to be a right decent chap all round.

Much maligned and ousted from the Lannister family following Joffrey’s deserved death Tyrion has proved his bravery and fortitude in many desperate circumstances. I feel his heroism comes from the determination to never give up despite his physicality and the demonization which occurred when he was born. Be it on during the Battle at Blackwater Bay or when standing up to his father Tywin, Tyrion just refuses to buckle and heroically ploughs on.