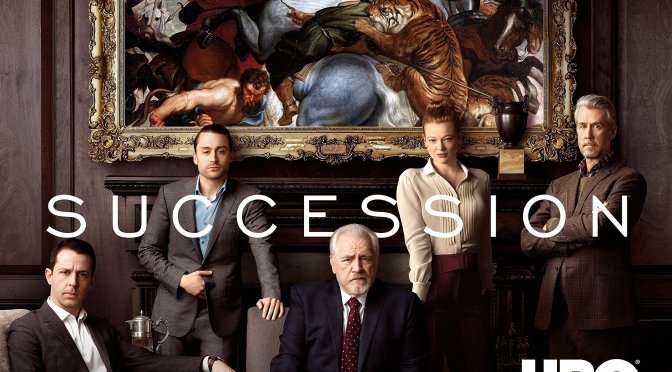 “Money, money, Money! Must be funny! In a rich man’s world!” ABBA

Is it funny? In a rich man’s world? Or woman’s? Or anyone’s?

From my perspective I’ve never understood the desire for incredible wealth and power. Of course, it is great to be comfortable and have the money to feed, clothe and house yourself. But, that need and want to have extravagant things is beyond my comprehension. Obviously, if you’re born into money, it could be deemed unavoidable. Some may say it’s a curse. However, we all have choice as to how we behave whether we have money or not.

Personally speaking, I have everything I need to live. I have enough nice things. I have a car, television, mobile phone, computer, food, clothes, shoes, people I love and, at time of writing, my health. I have enough. For some enough is never enough. The extreme is only halfway. Ambition and power and wealth and greed drive them forward. Their desire for more has no limit.

Succession (2018), is another television show about the darker actions of the filthy, selfish and narcissistic rich. Similar, but far more poisonous than Showtime’s hit Billions, the narratives are driven by power games from the Machiavellian playbook. Set within a behemoth media conglomerate, Waystar Royco, led by octogenarian, Logan Roy (Brian Cox). the plots and subplots focus on the various family members and fucked-up personalities within this permanently dysfunctional family. The characters are not so much ‘Masters of the Universe’ but masters and mistresses of their own calamitous downfalls.

Is it funny though? In a rich man’s world? Well, based on Jesse Armstrong’s creation Succession (2018), it is! Unsurprisingly, from a writer who has worked on such comedy masterpieces as Peep Show, The Thick of It, Four Lions (2010) and Veep, these ten episodes contain some of the most biting and sarcastic dialogue and situations you could experience. It’s black though. It’s tumour humour. These are cancerous laughs which eat you from the inside. You’re entertained watching the programme but simultaneously aware of how accurate its’ dark vision of humanity, greed, power and family life is. No one gets out of here alive, including the audience.

The show bleeds quality from cast to production values to direction and not forgetting Nicholas Britell’s incredible score. You have to have a strong stomach to watch so many irredeemable and unlikeable characters all inhabiting the same space. But the writing is an absolute marvel with all manner of slicing one-liners which cut with scalpel like precision. The main narrative strands involve the children challenging their father’s running of the company. Watching Brian Cox viciously curse and do battle with them is drama of the weightiest kind; almost Shakespearean at times.

Lastly, I must say the acting is of the highest order. Sarah Snook, as political campaigner daughter, Siobhan, is destined for big things. British actor Matthew MacFadyen gives a nuanced comedic rendition as Siobhan’s fiancé; both sycophantic to the Roy family and a bully to company underlings. Kieran Culkin is sleazy and the most unlikeable of all, while Alan Ruck’s passive aggressive older son waltzes in and out of scenes with consummate skill.

As Logan Roy Brian Cox is well, just so Brian Cox; sweary, growling and menacing. His character locks horns most of all with second son, Kendall Roy. Portrayed exceptionally by Jeremy Strong, Kendall is a sad figure, attempting recovery from drug addiction, but cursed to desire to lead his fathers’ company. This leads to him making some incredibly dubious decisions. Because enough is never enough and that is the tragedy. In Succession, it is far from funny in a rich man’s world. It is sick, twisted and ultimately very black.