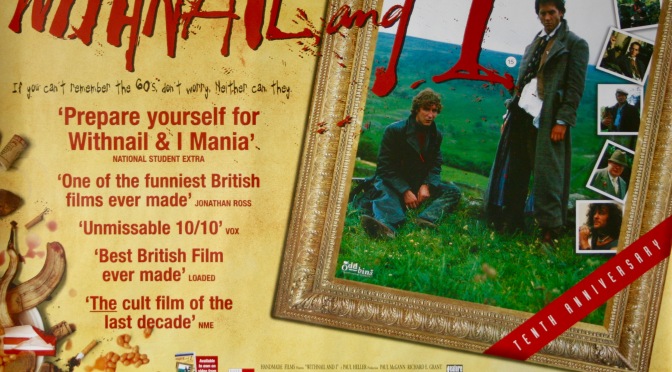 Written and directed by: Bruce Robinson

I am not one to believe in fate, but there has to be something magical about the random moment, at the age of seventeen, I was perusing my local video shop looking for a film to rent, and the cover of low-budget, British independent character drama, Withnail and I (1987), shone amidst the variety of Hollywood produced fodder. I picked up the box and for some reason the story of two unemployed actors mooching about at the fag end of the 1960s called to me. Perhaps it was the front cover featuring the debauched and worse-for-wear looking character of Withnail which drew me in? Or was it the casting of Paul McGann as the eponymous ‘I’, an actor I recognised from excellent TV drama, The Monocled Mutineer. Whatever the reasons, I rented the film and a special bond was formed forthwith. It lasts to this day.

Firmly in my top-ten-line-for-line-best-dialogue-ever-movies, Withnail and I (1987) simply bursts with memorable spats, insults, one-liners, and speeches. Another major strength of Bruce Robinson’s elegantly profane screenplay is the relationship between permanently inebriated and cowardly ‘thespian’, Withnail (Richard E. Grant) and his buddy, ‘I’ (McGann). It is a strange friendship full of mutual disrespect, petty bickering, and envy, but by the end of the film a kindly form of love is revealed. Withnail may seem an angry man, but ultimately, he’s using that ire to hide pain, sadness, and disappointment.

“I feel like a pig shat in my head.” Withnail

Richard E. Grant is incredible as the paralytic, pathetic and cowardly Withnail, who, along with ‘I’, laments a lack of career opportunities. Such bitterness, jealousy and ranting make him hugely obnoxious. However, Robinson’s exquisite writing and Grant’s subtly empathetic performance actually create an incredibly poignant character. Well, that and he’s absolutely hilarious, Indeed, it’s a hedonistic joy witnessing Withnail drinking every liquid known to humanity as he attempts to obliterate the now and tomorrow. Unbelievably, Richard E. Grant was teetotal, so director Bruce Robinson had to get him very, very drunk in preparation for a role he never bettered in his whole career.

Bruce Robinson, arguably, never reached the heights of Withnail and I (1987) again, although he does have other impressive writing credits. But this screenplay is one of the greatest ever written; conversely making it one of the funniest and tragic films of all time. Lastly, his often quoted but rarely bettered work is one of the greatest I have ever read, brimming with towering poetry, bilious insults, and drunken repartee. I mean there is little plot to the story of two actors getting drunk, going to the country, getting drunk and coming back. However, it remains one of my favourite films of all time, with one of the most memorable characters in Withnail.