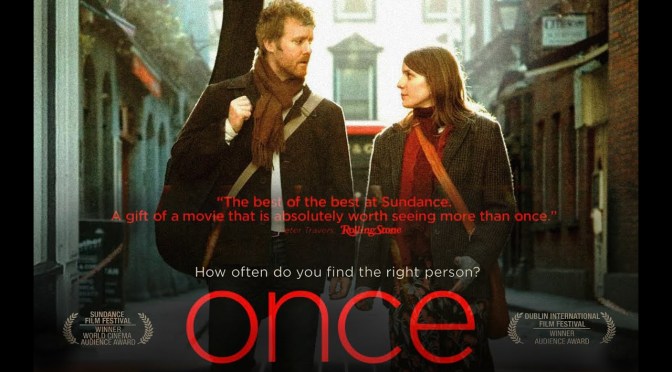 Written and directed by: John Carney

I am not sure why I missed this film first time around, however, it’s most likely due to prior prejudices against musical or music-based films. Yet, since I married in 2016, I have began to watch and enjoy more musicals. This is mainly due to my wife being a massive fan of musical cinema and theatre. While it’s still not necessarily my favourite genre, every now and then an utter gem of a musical will emerge. John Carney’s beautifully moving love story between a hoover repair guy and a flower-selling girl, Once (2007), is certainly one of those.

John Carney is an honest filmmaker who is attracted to outsiders and people with real emotional turmoil. They tend to be at crossroads in their lives and are struggling either with their dreams or their relationships. He also loves musicians, flaws and all. In Begin Again (2013), a washed-up musical executive, portrayed by Mark Ruffalo, meets unhappy singer-songwriter, Keira Knightley and their first-world romance is played out to bittersweet consequences. Similarly, in Sing Street (2016), a troubled teenager comes of age through his 1980’s pop band and bittersweet romance with a rebellious and equally-troubled schoolgirl. Notice a pattern? Well, this style of music, gritty city backdrops and salty romances were established in Carney’s breakout hit, Once (2007).

Made for a ridiculously low budget of around $150,000, this ultra-realistic musical contains songs that burst with love and pain from the characters of Guy (Glenn Hansard) and Girl (Marketa Irglova). The two meet and connect, but this is no conventional romance as they both have powerful emotional histories between them. It’s the beautiful music and their authentic dialogue exchanges which drive the story. Hansard’s singing and guitar playing are so powerful and moving. Their duet in the music shop of the song, Falling Slowly is a tour-de-force. I was not surprised when I saw it had won the Oscar for best original film. Overall, Once (2007) is a surprisingly brilliant no-budget feature, shot on the streets of Dublin, which deservedly became a big hit.