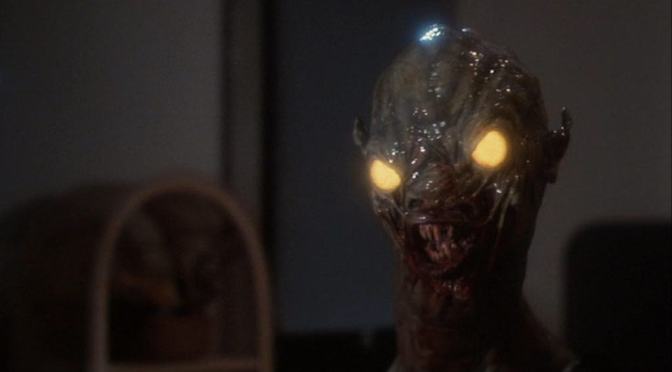 Halloween is slowly creeping out of the fog and shadows. It’s a time of the year where horror films come to the fore. Personally, I watch horror all the year round, but it’s always fun when the genre pulls focus on the cultural calendar.

Rather than concentrate on current horror film releases, I thought it would be interesting to seek out chillers that are a tad less known. So, I had a scan through Amazon and Shudder screening platforms and unearthed several cult horror gems worth catching.

Some of these films come from the 1980’s period which encompassed the “video-nasty” era in the United Kingdom. With the advent of home video technology, the government suddenly got frightened about bloody and exploitational films and desired control. Censoring seventy-two titles and banning a flurry of films actually made people want to watch them more. This caused the government’s policy to backfire as people clamoured to watch “pirate” video versions of such films. In fact, it was in the living room watching forbidden films and the old Universal black-and-white classics where my true love of horror cinema began.

The following films may not have been banned at the time, but I was intrigued by how many of the titles I missed seeing on first release. Aside from Ben (1972), When A Stranger Calls (1979) and Phantasm (1979), I hadn’t seen the other titles. Therefore, if you’re looking for obscure horror films to watch then delve deep into the Amazon library. They have a fine feast of 1970’s and 1980’s fear inducing fare, many of them which were on the infamous “video-nasty” list. Dare you watch them!?

An early Dario Argento giallo finds a blind puzzle-maker (Karl Malden) and dogged reporter (James Franciscus) investigating murders at a genetics lab. Aside from a couple of scary set-pieces, notably in a graveyard, it neither works as a detective nor horror story. It is however beautifully filmed with a vibrant restoration. (Mark: 6 out of 11)

As the Nuclear Regulatory Commission track down missing toxic waste the New York homeless population are becoming victims to something monstrous in the sewers. An energetic sci-fi-horror hybrid combining a schlocky plot with socio-environmental themes. It’s not bad and actually quite funny, with early roles for John Heard and Daniel Stern whose acting raises the overall quality. (Mark: 6 out of 11)

I remember school kids raving about this film when I was twelve. I really wanted to see it, but could never find it in the video shop or from the “pirate” video guy. The plot merges The Blackboard Jungle (1955) with Death Wish (1974), as Perry King’s music teacher attempts to soothe the savage beast of a gang of nasty punk students. He fails and the final act revenge-driven rampage is fantastically inventive and gory. Latterly famous director, a young Tim Van Patten, portrays the psychotic, Peter Stegman, with vicious zeal. A true exploitational classic. (Mark: 8 out of 11).

This is one of those films I had never even heard of. With a sizeable budget of $1.4 million dollars for a slasher film, it concerns four college students, including a grown-up Linda Blair, spending the night in a creepy house as part of an initiation ritual. Unfortunately, there’s a psychotic killer about hellbent on hunting them down. We’ve seen it all before, but it was nicely filmed and had decent humour. Overlong but way better than I thought it would be. (Mark: 7 out of 11)

I reviewed the remastered version of Don Coscarelli’s low-budget masterpiece here, but only just got round to watching the sequel. Phantasm II (1988) had a bigger budget and suffers from some stodgy plotting. The re-casting of Mike with James Le Gros in the role throws you. Yet, once Mike and Reggie fight with the Tall Man (inimitable Angus Scrimm), the razor-sharp spheres and the hooded monsters, the film finds real pace. Coscarelli blows-up a lot of stuff and ramps up the weaponry, but the sequel lacks the twisted magic of the original must-watch horror fantasy, Phantasm (1979). (Mark: 6.5 out of 11)

Another unknown mini-gem I found on Amazon. This Canadian slasher film is, you guessed it, set on a train and finds, yes you guessed it again, college students getting picked off one-by-one by a vengeful psycho. Notable for a really good plot which gives the killer empathy and understandable motivation, it also stars everyone’s favourite final girl, Jamie Lee Curtis. With disguise and magic prevalent in the themes, David Copperfield also appears in a neat role. Highly entertaining with a killer twist. (Mark: 8 out of 11)

Inspired by a famous urban legend, Fred Walton’s chilling suspense thriller has one of the most nail-biting opening twenty minutes in horror cinema. Carol Kane is the babysitter terrorized by a series of tense phone calls from a mystery ringer. From that terrifying start the story falters slightly as it focusses on Charles Durning’s obsessive search for the unhinged man. Only when Kane rejoins the film some years later does the horror rise up again in a truly frightening denouement. (Mark: 8.5 out of 11)

This was an odd one because I knew and seen the sequel Ben (1972) when I was a younger. Little did I realise the original Willard (1971) had been released the year before and became a sleeper box-office hit. Bruce Davison is excellent as the introvert, Willard, who is bullied at work by his aggressive boss, Ernest Borgnine. Only when, and take a deep breath here, Willard trains an army of rats does he gain confidence to take on the world. It’s a weird film that actually works because of Willard’s fascinating character arc and Davison’s nuanced performance. (Mark: 8 out of 11)

The follow-up Ben (1972) focusses on Willard’s alpha rat, Ben, and his friendship with lonely kid, Danny. The sequel really raises the rat count and there appears to be thousands of them in their dirty lair. Danny is a likeable kid who suffers from a serious illness that prevents him from going out. Why he would make friends with a killer rat though is still frankly nuts! A lack of thrills and goofy premise make it difficult to recommend, and is more famous for the classic Michael Jackson hit called, surprisingly enough, Ben. (Mark: 6 out of 11)