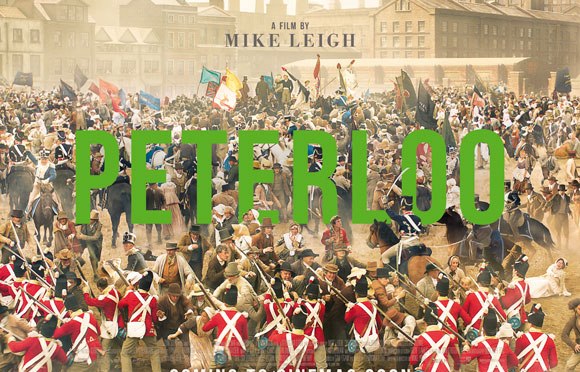 Peterloo (2018) is a film of voices, of speech, of reform and of freedom. It is Mike Leigh’s thirteenth feature film production and clearly a labour of love for him, his production team and the army of actors who put their hearts and souls into this powerful work of cinema. Four years in the making, this historical document, as well as paying tribute to those who campaigned for the vote in the 1800s, is also a passionate love letter to Northern England and the proud working classes of the era.

The film begins in 1815 at the battle of Waterloo and then brings us into the factories and streets of Manchester and surrounding Northern areas. As with many Mike Leigh films you can feel the palpable authenticity in the settings, accents and places the characters live. Leigh also cuts to local magistrates who hold up the draconian laws designed to keep the poor in their place; handing out savage justice such as the death penalty to one man for stealing a coat. We also visit London and experience those ruling classes who inhabit the Houses of Parliament and Royal palaces, lording over the oppressed workers.

The character strokes are broad at first before Leigh further develops their personalities. The dialogue is delivered formally initially as the characters educate the audience regarding various laws affecting them. This seems jarring but also serves the documentary and historical nature of the piece. As the narrative strands build steadily to the fateful march the editing throughout cross-cuts between the ruling, working and legal classes representing their differing perspectives. The march was intended to be a peaceful demonstration; a plea for Parliamentary reform and the desire to be heard. Surely, that’s the right of everyone in a civilised society?  Well, not in 1819.

With the film driven by a whole host of wonderfully written speeches, it could be argued, Peterloo, lacks the warmth and humour of Leigh’s other more personal films. However, there are some formidable performances amidst the huge cast. Maxine Peake is earthy and convincing in her representation of a mother struggling to make ends meet. Rory Kinnear brings an intelligence and pride to the confident character of Henry Hunt; a wealthy landowner committed to reform and repeal of the onerous ‘Corn Laws’. As is the case with Leigh’s other films the acting is uniformly impressive because you know months of planning and rehearsal would have been committed to the production.

The film is also shot beautifully by cinematographer Dick Pope. There is a strong leaning toward a naturalistic lighting palette. Interiors are often bathed in sunlight shining through windows onto the shadowed faces of the characters. His camera is placed ideally to capture the rural and industrial locations of the era. There’s also some wonderful framing within arches and factories. Lastly, Leigh’s meticulous approach to authenticity reveals the machinery from the time, such as the looms and printing presses. Similarly, you can almost feel the reality of the epoch through the excellent costume design.

The final act brings us to the fateful day itself. Mike Leigh handles the massive crowd scenes expertly and shows the injustice and barbarism brought about by the cavalry and law enforcements attacking up to 80,000 people who are protesting for change. Having spent a few hours establishing the characters and their relevant causes the emotional impact of the attacks by the ruling classes is palpable. This is ultimately very powerful cinema which resonated with me because it reminded of the historical events down the ages where people have been murdered or injured while trying to make their voices heard.

Peterloo may not be for everyone as it is a long epic with a plethora of dialogue heavy scenes. Yet, I was enthralled as the language and passion of such discourse is very eloquent and heartfelt. The sheer scale of the filmmaking itself is also impressive even if the narrative lacks a specific personal focus throughout. Mike Leigh’s approach is very clear as it represents the working class as victims to an oppressive regime which has no regard for human suffering. Indeed, it should be every person’s basic right to have a voice and given past and current social and political events Peterloo contains a message that remains very valid today.