The J. J. Abrams directed Star Wars: The Force Awakens (2015) reboot broke not only the internet, but also box office records worldwide. It was a safe, entertaining and impressive spectacle which combined a mix of older characters we knew and loved, plus some bright young new things too. The action was breathtaking and brilliantly done, however, the story was a retread of A New Hope (1977) (with a female Luke), plus a series of glaring plot holes. Still, loads of action and great bad guys made this a fun blockbuster.

Director Rian Johnson’s, sequel Star Wars: The Last Jedi (2017) was, of course, another massive hit across the galaxy too. However, having watched it again recently, I felt it was racked with inconsistencies in tone and suffered weak storytelling. Indeed, the whole trilogy ground to a virtual standstill with Rey’s central story standing still and Poe and Finn’s mission proving to be a redundant decoy and wild goose chase rolled into one. Furthermore, I was shocked that a meta-filmmaker like Rian Johnson was given the Star Wars gig. To me, his filmmaking choices are too genre subversive and so it proved. Because, while The Last Jedi (2019) had some memorable moments, (mostly Adam Driver) and Luke’s emotionally charged arc, yet overall it failed as a Star Wars story.

Thus, it was not surprising when genre specialist, J. J. Abrams, was brought back to save the trilogy with The Rise of Skywalker (2019). In returning to the safe, fast-paced, spectacular blockbuster style of The Force Awakens (2015), we may have lost idiosyncratic moments of character and humour, but at least this story has plot cohesion, punchy pay-offs and emotional impact. What The Rise of Skywalker (2019) also has is incredible visual set-pieces throughout. The J. J. Abrams led production army of special effects wizards have given us some memorable light-sabre and space battles. One in particular on the moon of Endor, that finds Kylo-Ren (Adam Driver) and Rey (Daisy Ridley) facing off, took my breath away.

Another major strength of this final episode is that Rey’s narrative arc is finally given the development it should have got in The Last Jedi (2017). Daisy Ridley’s performance too in this film is excellent. While she was a bit lightweight in the first two films, I felt she really came into her own here. This is helped by the revelation as to who her real parents were. Having said that, Abrams and his co-writers desperately scrabble around in the first hour of the film trying to set this up. At times the pace was too hectic. However, once it settled and all the flashbacks and back stories were in place, Rey’s character faces a very ominous choice. Conversely, her deadly psychic link with Kylo Ren continues to be a fascinating duel of mind, spirit and body. These developments are assisted by another compelling performance by Adam Driver. Kylo Ren’s internal struggle comes to the fore too, with a number of heart-pounding pay-offs at the end.

I’m also pleased to say that Poe (Oscar Isaac), Chewbacca, and Finn (John Boyega) are given a real meaty mission to get their teeth into. One that in fact links to the main story and themes of the whole film too. The standard plot McGuffin here is a Sith “wayfinder”, which the rebel team and Rey set out to recover. Let’s be honest, it’s no more than a “Treasure Hunt” plot structure, however, at least it allows for the more emotionally charged aspects of the story to develop and leads us perfectly to the incredible battle sequences in the final act. Moreover, plot predictability aside, there are other weaknesses in the film. I didn’t mind the CGI-driven rendition of Leia Organa (Carrie Fisher), however, by the ninth episode in the franchise I felt maybe they’d waited too late to introduce new aspects of the Jedi mind-trickery. But, hey it worked well in the story and was so cool that you just accept ‘the force’ as is.

Ultimately, The Rise of Skywalker (2019) is a return to genre form following the idiosyncratic subversion of The Last Jedi (2017). In fact, it was so entertaining it is the most enjoyable one (excluding the prequels) of the new trilogy. Despite a rapid start to the narrative, which tries to recoup the ground lost by the prior film, once it finds a rhythm there are some amazing action set-pieces, impressively cinematic visuals and thrilling emotional moments. While it may adhere to cookie-cutter, franchise genre expectations, overall, The Rise of Skywalker (2019) is delivered with incredible force and made for perfect holiday blockbuster entertainment. 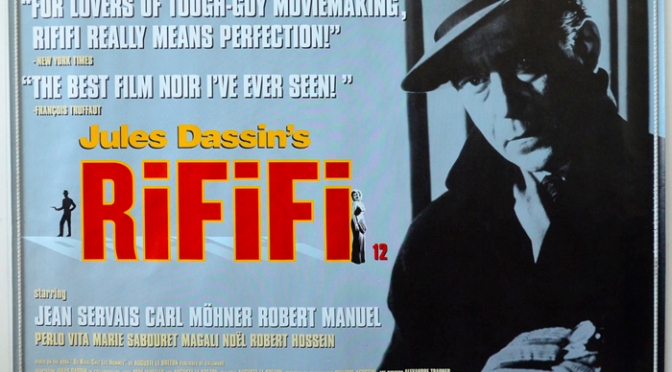 I was reminded of this classic low budget crime film recently while watching the brilliant 1980s set spy drama, The Americans. In it, Elizabeth Jennings (Keri Russell) is once again undercover manipulating a source, who happens to be a film geek. There she “bumps” into said source while watching Rififi (1955).

If you haven’t seen Rififi (1955), it’s a genuinely brilliant example of the heist movie. Directed by Jules Dassin, the standout sequence in the silent heist in the middle of the film. Lasting around 30 minutes there is NO dialogue and NO music. It is pure cinema of the highest quality and absolutely absorbing. We may not vindicate the actions of these criminals, but we are dragged into the cleverness of their crime.

Shot for what was a pretty low budget of $200,000, it features a cast of mostly unknowns or actors whose career, like the characters they play, was in decline. However, due to the sublime direction, tricky plot and stylish photography, Rififi, is a great example of ideas and ingenuity outweighing budgetary constraints.

Rififi was a critical and commercial success in France and other countries. However, it was banned too in some countries because the governments were afraid the robbery would be copied by actual criminals. Moreover, the film and the silent heist legacy live on. Brian DePalma’s film Mission Impossible (1996) clearly riffed on the set-piece with the elaborate Langley heist sequence. Interestingly, Keri Russell herself would appear in Mission Impossible III (2006); as an American agent this time.