Created and written by: Charlie Brooker

Having positively reviewed Season 4 of Charlie Brooker’s wonderful anthology show here and the recent “choose-your-own-adventure” stand alone film, Bandersnatch (2019), here – I can further confirm I am a massive Black Mirror fan. Indeed, if Charlie Brooker wrote and produced a story about himself having his toenails clipped in the future, I would definitely enjoy it that too.

Lastly, it’s safe to say I certainly loved the latest three episodes of the programme and not just because Brooker wrote them. It’s because the ideas relating to the darker side of technology are so fascinating and of course the productions are of very high quality. Here are mini reviews of each episode with usual marks out of eleven.

Danny (Mackie) and Theo (Beharie) portray a loving couple who having been together for some time suffer a marriage dip and a somewhat curious eleven-year itch. This drama is especially propelled when Danny’s best mate, Karl (Abdul-Mateen II) reconnects with Danny and the two play the Virtual-Reality video-game, Striking Vipers, online. Soon the two enter into a curious online relationship, one which threatens their relationships and sanity.

While the danger of videogames and VR have been explored before in Black Mirror, this is freshly presented both dramatically and humorously via an unexpected and bizarre love triangle. I was very empathetic for the main characters as they felt trapped by family life and struggle to keep the romance going. Plus, that need to escape propels some hilarious scenes that pay homage and parody combat videogames in general. Funny, touching and surprising, Striking Vipers is an excellent season opener.

Actor-of-the-moment, Andrew Scott, gives another blistering performance as a rideshare/”Uber” driver, Chris Gillhaney, who kidnaps a young Smithereen employee, Jaden (Damson Idris). Smithereen are a social media company not dissimilar to Facebook or Twitter, and Gillhaney holds a serious grudge against them. It’s so serious in fact, he will kill Jaden if he doesn’t get to speak directly to Smithereen CEO, Billy Bauer (Topher Grace).

Structured around a very tense standoff in an English field between Gillhaney and the Police, the events also go ‘viral’ via social media and online news platforms. Scott’s characterisation of Gillhaney is dramatically impressive. He emits a sadness, guilt and anxiety which forces his character to commit an unlikely crime. While we do not condone his actions Scott keeps you onside with his sterling portrayal of a man on the edge. Ultimately, the narrative turn at the end impacted me because it felt so believable and human. Once again Brooker taps into the heart of the technological matter and how reliance on it can cause tragedy and senseless loss of life.

Pop star Miley Cyrus stars as pop star Ashley-O in this dramatic and comedic techno satire, which finds her character being pushed to the creative limit by her unscrupulous manager. At the same time Ashley-O uber-fan, Rachel (Angourie Rice), worships every word Ashley O’s manufactured persona spits out; much to the chagrin of her metal-head sister, Jack (Madison Davenport.) The two sisters’ conflict is exacerbated when Rachel is given an Ashley-O smart speaker and Rachel becomes obsessed with the techno doll. As the story progresses the two Ashley-O narratives connect in a somewhat contrived but captivating way.

Starting as a teenage-rites-of-passage-profile-of-a-pop-star-mash-up, this narrative crosses the genres and becomes a heist-led comedy by the end. With so many criss-crossing leaps in style the characters get a little bit lost in the mix of ideas. However, use of technology to exploit both the pop singer and the all-consuming fan finds Charlie Brooker’s satirical darts hitting more targets than it misses. Arguably, this is the weakest of the three episodes as the onerous pop manager is a bit of a cliche. Plus, more planning could have gone into the final act when it all felt rushed. It is nonetheless very entertaining episode, very much on point in its vision of pop culture, the music industry and society’s ever reliance on technology for emotional interaction. 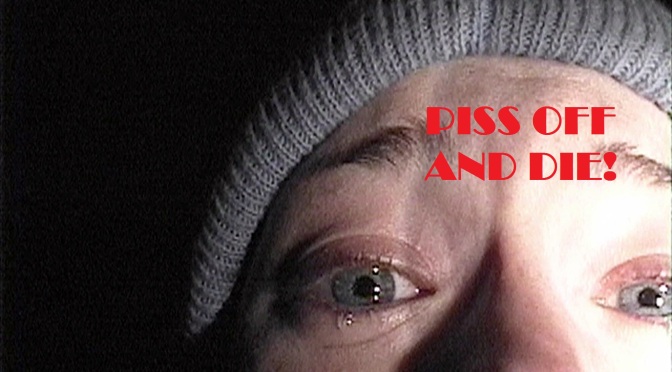 TEN THINGS I HATE ABOUT YOU:  FOUND FOOTAGE FILMS

**CONTAINS SWEARING AND SPOILERS AND OVER-USE OF CAPITALS**

Usually I’m very positive on this page but on occasions I feel the need to let rip at things that irk me. Loss of the Voice-Over Guy in film trailers pisses me off as does the generally poor expositional style of many trailers which TELL the whole story or give key plot points away IN THE TRAILER!!!  E.g. Terminator: Genocide (2015). But there is one sub-genre of movie-making which has me tearing my nuts off with rage and that is the continued proliferation of FOUND FOOTAGE style films. And here are TEN reasons why!!!

I hate this fucking film!  Because of its ridiculous success it undoubtedly gave birth to an army of other bastards that have been stinking up the cinema and TV screens for the past few decades. Firstly, this film sucks!  As both a story AND a horror story.  If this film scares you then you are a moron!  It’s an okay short film padded out to an overlong bore-fest which was only topped for boringness when Paranormal Activity (2007) came out.

I’m happy for the filmmakers for garnering such success but given they have not released anything of note since shows this was a fluke success. I mean the characters were awful and dumb; notably when one moron threw away the map and got them LOST!  The ending isn’t bad but I was just so relieved when they all died!  Verbal Kint once said, “The greatest trick the Devil pulled was convincing you he doesn’t exist.”  I disagree: it was making this film so phenomenally successful.

Found footage is unnecessary to tell a story. I can see some benefit in perhaps framing your story like that if it’s Cannibal Holocaust (1980) and it’s documentary film crew blah-blah-blah!  But in my opinion it ADDS NOTHING to the story as a stylistic device.  Use flash-backs, montage, flash-forwards, voiceover, non-linear structures etc. but found footage is like one of those Chihuahua dogs: irritating, totally lacking in charm and completely pointless.

Like Hitler, Gangnam Style, Miley Cyrus, Adam Sandler, Ugg Boots etc. found footage films are inexplicably successful yet also poison humanity!!  I admire low-budget/independent filmmakers and DO NOT begrudge any success these people have had BUT THE FILMS ARE RUBBISH!! The cinematic epitome of the Emperor’s New Clothes.

It’s just SO clunky!! Even the best ever found footage film Chronicle (2012) which uses the device imaginatively suffered because they had to make up some reason for one of the characters to be filming.   Oh, it’s my sister’s mum’s birthday and funeral and we need to film it for future posterity. Oh, I accidentally left my phone camera on while in the woods and am now being hunted down by my own shadow! No!  STOP IT!!

Need I say more?!?  Low budget does not mean the film needs to be shot through CCTV or infra-red or in low-grade digital footage grainier than hamster shit. Ten minutes or so is bearable but a whole film like that is just too much to handle!

Oh, we’re gonna make a horror film shall but we don’t have much money: shall we use our imagination like say Sam Raimi or James Wan and construct a proper story with nasty monsters, witty dialogue, funny and horrific set-pieces OR shall we set up a fake camera and have doors move slightly or faces suddenly appear on screen or it’s quiet and then a shadow moves!  Yeah, don’t bother with characters you may connect with or creating suspense through something called a story let’s make a found footage film because WE ARE LAZY!!

It’s an invite for every talentless, breathing moron with a camera who think they can become a filmmaker.  Don’t bother writing a script or creating decent characters or storyboarding imaginative cinematic moments – just don’t bother because you can just tripod a camera and PRETEND its close-circuit TV or a cameraman or videographer! Even horror legend George Romero got sucked into the talent vortex with the atrocious Diary of the Dead (2007) and Oscar winner Barry Levinson too with The Bay (2012).  Stop the world I’m getting off!!

Like rats in London you’re never too far away from a found footage film.  There’s too many of them – they are a plague upon the culture and humanity overall. Please STOP watching them because as they are cheap to make they spawn rubbish sequels! They are like the appendix; utterly pointless but when they burst on the cinema screen they are poisonous, painful and one must immediately seek medical help.

10) FOUND FOOTAGE FILMS ARE NOT SCARY!

Perhaps in the darkened cinema you could be tricked into THINKING they are scary when a shadow, door or tree moves but they’re not. Overall they are as scary as a Panda in a bib!