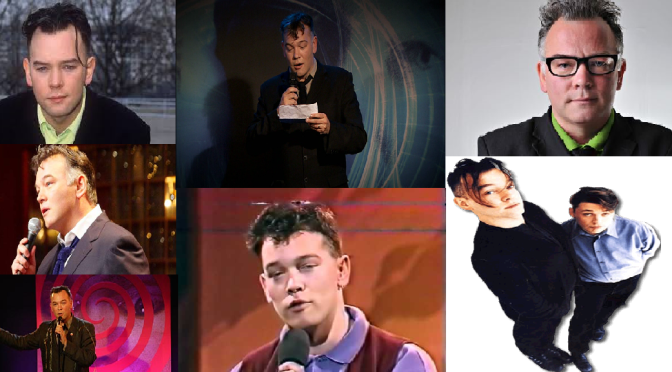 ROOM WITH A STEW (WORK IN PROGRESS)

If someone put a gun to my head and asked me who my favourite living stand-up comedian was I would probably have to say Stewart Lee.   Obviously the likelihood of someone putting a gun to my head asking my favourite comedian is silly. They could point it at my knee and I would tell them. In fact they wouldn’t need a gun. Anyway, through sheer consistency of quality comedy product he’s created over the years, for me, he’s a national, regional and local treasure.

Having dabbled with stand-up comedy myself to various degrees of failure it was terrific to see a master trying to make material, not far out of the brain and on the page, work.  The first half-an-hour-or-so he delivered a funny routine about Islamaphobia before battling through a more personal piece about Urine.

New comedy material is a tricky beast. The comedian becomes a kind of  blind tailor measuring and making a new suit not knowing whether the material is going to fit the customer or not. Thus, you trim and adjust and stitch and cut away until you find the bits which work and get rid of those that don’t. Sometimes the seams just split and the suit lies in tatters on the floor. What comedy has to do with clothes I have no idea:  I’m just saying it can be tough is all!

Stewart Lee appeals to my pedantic, grumpy and meta-intellectual side. He challenges me mentally and his thought-provoking material works on many levels. On this night I could sense Stewart Lee at odds ever-so-slightly with the material, the cogs of his mind willing it to work as he listened to the audience for their reaction. His trademark beration of us for not “getting it” was a feature throughout; in fact he used it to re-energise the room on occasion.  Overall, it was a great night and a pleasure to see him at work. Lee’s Comedy Vehicle has been a must-see on BBC2 for the past few years and will continue to do so based on tonight’s work-in-progress show.

If you’re not a fan of Stewart Lee and you like comedy that’s slightly more thought-provoking than material about the difference between cats and dogs then check out his website which contains information about ALL his full length shows, TV appearances and stuff from his brilliant Comedy Vehicle Television show.