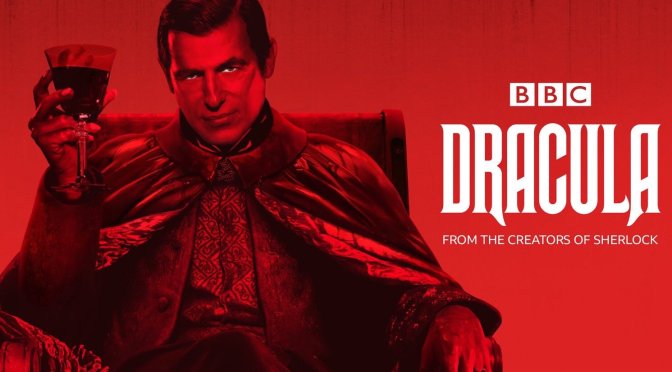 Based on: Dracula by Bram Stoker

Mark Gatiss and Steven Moffat are uber-television scriptwriters of vast experience and expertise. Solo and together they have been involved with fine TV programmes including: Sherlock, Doctor Who, Coupling, The League of Gentlemen, Press Gang, Jekyll and many other films, comedies and dramas. Their latest BBC project found them combining forces again and breathing new life into Bram Stoker’s classic vampire novel. Screened over three dark nights on BBC1 from January 1st, 2020 onwards, this horror adaptation mixed Stoker’s traditional vampiric tropes with fresh and bloody ingredients infused by Moffat and Gatiss’ typically iconoclastic approach to genre.

The structure of the first episode, Rules of the Beast, finds a gravely ill Jonathan Harker (John Heffernan), recounting his misadventures having travelled to Count Dracula’s (Claes Bang) castle in Transylvania. A haunted shell of a man, his stories of doomed employment, entrapment and the “children of the night” are delivered to Sister Agatha (Dolly Wells). Somewhat incisive, intelligent and irreverent for a nun, Sister Agatha becomes both our hero and main foe to Dracula’s nefarious uber-villain. Having said that, the fantastically witty script and Claes Bang’s charismatic representation of Dracula almost succeed in making him the hero. Indeed, other than being a life-sucking, murderous, blood-addicted, shape-shifting, immortal and homicidal maniac he’s actually quite charming and likeable.

The first episode, apart from certain structural alterations and differences in characterisation, stays kind of faithful to the spirit of Stoker’s gothic vision. The second episode especially is one of the best examples of horror television I have seen in a long time. Cleverly called Blood Vessel, the action merges suspense and terror with an Agatha Christie style of plot. Here the crew and passengers of the ship Demeter find they are at the mercy of a vicious killer. It doesn’t take a genius to work out who is picking them off one-by-one. The episode also contains an ingenious reference to the BBC anthology series Inside No. 9. Thus, overall, this was my favourite episode of the series.

By the third episode though, Gatiss and Moffatt couldn’t stop themselves taking a bold leap away from the original text. The Dark Compass contains some fantastic twists and ideas, but arguably the writers strive too much for reinvention and originality. So much so, it lost some of the narrative impetus of the first two in the mini-series. Nonetheless, I would love to see more of Claes Bang’s Dracula in the future. His performance and chemistry with Dolly Well’s Sister Agatha were a bloody joy. Likewise, the script was brilliant; full of fangtastic one-liners, poetic turns of phrase and fascinating plot developments. Lastly, I was grateful they did not spare us the horror too. There were many memorably gory deaths throughout, as Dracula and his wolves wreaked devilish havoc across land, time and the television screen.