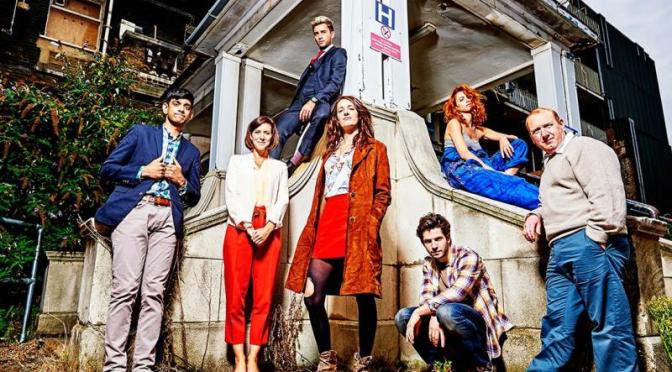 Created and written by: Phoebe Waller-Bridge

While Netflix, Sky, Fox, Disney and Amazon dominate much of the digital television output across the English-speaking world, Britain has, in the BBC, ITV and Channel 4 a lot to offer in regard to TV entertainment. I watch a lot of the main drama and comedy from the BBC, but I thought perhaps I needed a little catch-up on some Channel 4 shows I may have missed.

Thus, I set up an account at ALL 4 – https://www.channel4.com/ – and had a little look about. There are hundreds of films, comedies and dramas on their channel produced in the UK, Europe and the globe in general. So, I will be writing some reviews of stuff I’ve been catching up on that I can recommend. I have to state ALL 4 is great value because it is ad-driven and there is NO monthly subscription.

Crashing (2016), is a comedy centred around property guardians. Such people rent disused properties at a discounted rate but have to “protect” the property and leave virtually immediately when the landlord demands. It’s a great set-up for a television format as it allows for a mixture of various characters to connect in comedic, dramatic, romantic and hysterical ways. The setting, a disused hospital, is also great with the abandoned building providing a strong visual theme throughout.

Written by Phoebe Waller-Bridge, prior to her Fleabag and Killing Eve fame, the script pulls focus on six such property guardians. Waller-Bridge is Lulu, a twenty-something party girl drifting into London town looking for childhood friend Anthony. You can obviously see elements of her Fleabag persona in Lulu notably the way she uses alcohol, flirting and chaotic sexuality to hide her true feelings. Other characters are: said friend, Anthony; his girlfriend, neurotic Kate; middle-aged depressive Colin; French artist, Melody; awkward professional, Fred; and grieving, but charismatic estate agent, Sam. Kate, especially, is a progenitor for Fleabag’s hyper-stressed sister, Claire.

Waller-Bridge has created an interesting chorus of variant personalities who laugh and conflict and romance and sex in a very entertaining six episodes. I would say the show is more comedic than dramatic and there are some really funny moments which tend toward the slapstick, bodily functions, comedic misunderstanding or are just simply sex-driven. Who-fancies-who-or-who-is-fucking-who is a believable running theme through the show but there is some pathos there, especially with Colin, Fred and Sam’s characters. Overall, this is an under-rated comedy gem which, while it only ran for just one season, is definitely worth watching for the fast-paced writing and excellent ensemble acting.