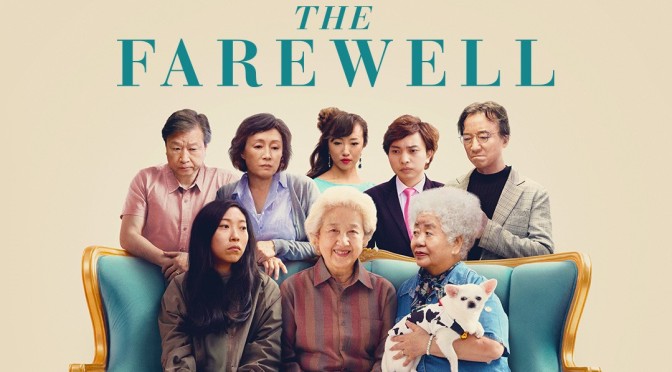 Written and directed by: Lulu Wang

High concept film pitches usually take a tremendously marketable idea that can hook you in seconds, but also cost tens of millions of dollars to make. Sometimes though you’ll get a lower budget, more art-house character film, which will have an equally alluring premise for a fraction of the price. Lulu Wang’s second directorial release, The Farewell (2019), is one such film.

Based on a true story or “actual lie” as the prologue text reveals, the narrative revolves around a Chinese family and their decision not to reveal to their paternal Grandmother, or Nai-Nai (Zhao Shuzhen), that she has terminal cancer. This leads to a bittersweet series of scenes, full of comedy and pathos, as the whole family must keep the secret while arranging a fake family wedding in China.

While it is an ensemble cast generally, the audience conduit is Awkwafina’s Billi Wang. As her character, along with her mother and father, have lived in America for several years she believes that the Grandmother she loves has a right to know about her illness. As the scenes unfold, she clashes with various family members creating a palpable suspense as to whether Billi will reveal the truth. Moreover, we get many scenes where the family debate the various cultural and philosophical reasons why Nai-Nai should or should not be told. These I found very thoughtful and engaged both my heart and mind in equal measure.

Overall, it’s a low-key character study but nonetheless gripping, funny and sad throughout. I was especially drawn in because I wondered what I would have done in that situation. Personally, I think it is best to tell the person they are ill, but as the film wore on, I could see the other side of the argument too. In other hands this could have been turned into a poorly conceived farcical comedy, but as this is based on the writer and director’s Lulu Wang’s real-life experiences, we ultimately get a very touching film about life, death, family, love, culture and truth.

Personally, I would have liked Billi’s character to have been a bit more fleshed out at the start. Mainly because I was unsure of her personality and she just seemed a bit depressed. I mean was she a writer or a pianist and what was her job? Having said that, Awkwafina provides subtle brilliance in her role as Billi, yet, Zhao Shuzhen steals the show as the effervescent Nai-Nai, whose character shows an unabated lust for life throughout this fine film.