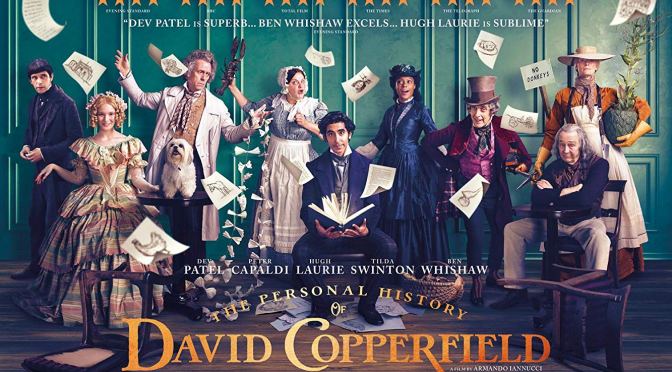 Based on: David Copperfield by Charles Dickens

Armando Iannucci is a bona fide genius if you ask me. For over thirty years I have been listening, watching and laughing at his various collaborative comedic works. These include notables such as: The Day Today, I’m Alan Partridge, The Thick of It, Time Trumpet, Veep, In the Loop (2009), and The Death of Stalin (2017). Now, one can include the wonderful delectation of an adaptation that is The Personal History of David Copperfield (2019). While I am embarrassed to say I am not as familiar with this Charles Dickens novel as I am his other books, Iannucci has taken his own inimitable style and married it perfectly to Dickens’ narratively opulent Victoriana vision. The result is an entertaining comedic and dramatic romp, tantamount to a quasi-greatest hits package of a Dickens masterwork.

Dev Patel stars as the eponymous hero in adulthood, while the young David is portrayed with energy and charm by Jairaj Varsani. As a child, his father passed, David is brought up by his mother, Clara and the ebullient housekeeper, Peggotty. Peggotty, portrayed brilliantly by Daisy May Cooper, encourages David’s word-smithery and youthful imagination. But this being Charles Dickens, David’s innocent and magical childhood soon gives way to tragedy and he soon finds himself at the mercy of fate. Conversely, the narrative is more of a chronicle of David’s life and contains what I call an “up-and-down” structure.

Through the rollercoaster that is David’s life he finds family love, then industrial pain via his stepfather condemning him to years of child labour. Then in an attempt to overcome his cruel fate he finds positive gain through family, creativity, romantic love, friendship and education. But destiny tests him by having this all taken away once again. Throughout, Dev Patel shines brightly. His David Copperfield is as tough as they come, as he rolls with the punch’s life throws at him. Moreover, he is a fantastic conduit and spine within the structure. Through him we are introduced to some wonderfully vivid characters; some likeable and some not so. Indeed, Iannucci’s casting is a primary joy with Peter Capaldi as Mr Micawber, Hugh Laurie as Mr Dick, Tilda Swinton as Betsy Trotwood, Ben Whishaw as Uriah Heep and Aneurin Barnard as Steerforth, all giving splendid renditions of their respective characters.

Overall, Iannucci and his scriptwriting partner, Simon Blackwell, mine Dickens’ novel for much comedy gold and there are so many hilarious one-liners and funny situations. Moreover, there’s some depth here too as it’s a story of an individual finding their soul, identity and place in a cruel world. One could argue a feature film is not enough to do the novel justice, and it would probably best be served as a television mini-series. However, for a whip-cracking, razor-sharp and heart-warming two hours, in the company of one the greatest novelists, one of the greatest modern satirists, wonderful set design; and finally one of the most impressive ensemble casts gathered in recent memory, this film is highly recommended.