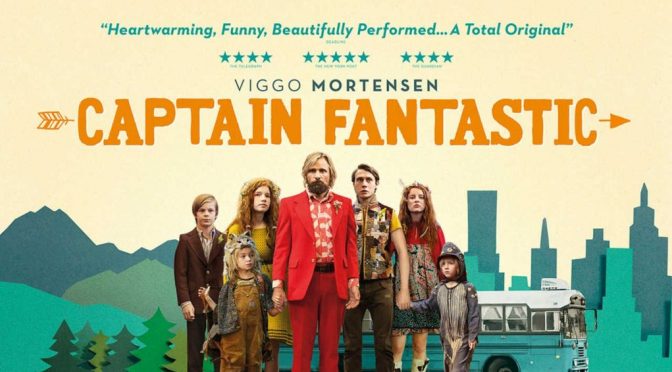 Written and directed by Matt Ross

Have you ever thought about living “off the grid?” Maybe you already do. It’s something I have considered from time to time. Get out of the rat race and stop punching the clock. I don’t think I have the abilities or desire to do so though ultimately. Moreover, I would probably miss my television and home comforts like baths and central heating. Having said that, it’s always fascinating to watch films or TV programmes about characters or people who have tried to live outside conventional societal rules. Films like: Together (2000), The Commune (2016), Leave No Trace (2018) and Into the Wild (2007) are all excellent narratives which represent characters who, to varying degrees of failure and success, have eschewed civilization. Matt Ross’ excellent recent release, Captain Fantastic (2016), is another darkly humorous and poignant movie to add to that list.

I’m not sure why I missed seeing Captain Fantastic (2016) first time round at the cinema, but I am so glad I caught up with it on Netflix. It stars the ever-brilliant Viggo Mortensen as Ben Cash, the father-of-six children, ages ranging from seven to late teens. Their mother, Leslie, alas, has suffered long bouts of depression linked to bipolar disorder and is currently in a mental health facility. Having established Ben and the children’s unorthodox living arrangements in a forest dwelling, the script throws them the tragic curveball of Leslie’s suicide. The family leave behind their strict hunting, education and exercise routine, as well as their self-built huts, shacks and wooden dens, to drive cross-country on their transformed mobile home, a bus called Steve, to attend Leslie’s funeral.

While grief and sadness hang heavy over the family unit, Matt Ross’ brilliant screenplay structures the film around that great American film genre — the road movie. As the bus, Steve, carries them away from the wilderness into civilisation, the clashing of the Cash’s alternative lifestyle and socially eccentric behaviour with society, provides a rich vein of comedic and dramatic moments. For example, Viggo Mortensen eating breakfast naked at a campsite while people pass by, and oldest son, Bodevan (George Mackay), romantically declaring his love to Claire (Erin Moriarty), who was just expecting a random hook-up, are both hilarious scenes. Similarly, Ben and Leslie, having tutored their kids at home quite impressively, have not factored in their apparent lack of socialisation in the outside world. Lastly, Ben’s candidness in matters of sex is shocking too and he conflicts with his sister, portrayed by Kathryn Hahn, who believes the children should have a more “normal” life.

Amidst the humour and hilarious culture clash punchlines, the director, Matt Ross, expertly weaves some heartfelt drama in their too. Ben fights with his father-in-law, Jack (Frank Langella) over Leslie’s funeral arrangements. Jack then attempts to take the children off him via legal means. Throughout all this Viggo Mortensen’s majestic acting performance anchors the film with searing emotional depth. His character must deal with the death of his wife and whether he has made the right decisions for his family. I mean, the kids have cuts and bruises from hunting exploits, possess strange invented names, wear unconventional clothes and do not celebrate Christmas at all. Furthermore, they eschew all organised religion in favour of celebrating academic philosopher, Noam Chomsky’s birthday. With the death of his wife and pressure from her family, it’s no surprise Ben feels cornered. However, Matt Ross’ film, Captain Fantastic (2016), lives up to the positive title and overall gives us a sense of warmth, community and love, proving that family unity is often an impossible bond to break.